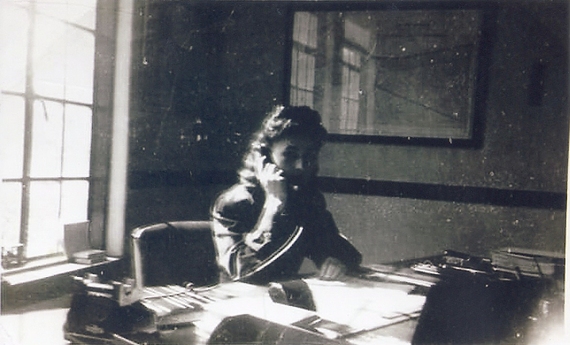 During the second presidential debate, I studied Hillary Clinton. There was a moment, where something in the way she paced her interaction, that called me back to the past. Her direct and metered speech, I could sense that she knew more than she would be allowed to say. I sat, unable to listen to her message, wondering why her mode looked so familiar.

I recognized the look from somewhere. Reserved and confident, there was no spitting out of bite-back barbs nor revved up reckless toss of empty phrases. Everything she said was worth the time it took to say it. She never panicked, no matter what question came around the corner, she was at the ready.

There was no stopping her, and she didn't rush through her point. I watched, Hillary came to slay, and there was a power to her presence.

I had seen it before. I closed my eyes, concentrating only on why I knew this tilt upward of the chin, this direct gaze with no presence of doubt. She knew what she knew.

What I was looking at, was my mother's face.

Hillary was all women who have had to fight against a lifetime of growing up where they were held back by those thinking they knew more, because they were male. My mother, in her lifespan, never censored or kowtowed to anyone. No one and nothing stood in my mother's way when she set her course. Most of that time, that meant her work, and her children. You could not describe either women, my mother or Hillary, without the word fearless. She was a force of nature, as Hillary was showing us during these debates.

I choose the word fearless, but I know the other words my mother heard when others spoke of her. She told me what they were, and they are much the same words we now hear about Hillary Clinton: annoying, frustrating, bull headed, stubborn. "She just doesn't know when to stop." This is what happens when you've been told your entire life how to be, who to be, because of your gender.

I often felt those same words about my mother. It's uncomfortable to confess, but especially as a young woman, there was no battle that I won when I went up against my mother. I didn't love growing up under her rules, but I learned a lot from it. With every year that I live in the form of a woman, I have come to an appreciation for what my mother's life was, as a female entering the work force of the '40s through the '60s.

Like Hillary, my mother was a qualified woman. My mother, too, like Hillary, did what she had to do, never saying no to work when she felt that she was needed. She struggled to provide as a widowed mother of six children and a new immigrant to this country. Of all the jobs that my mother worked, sometimes three at a time to support us, none was more important to her than that of mother. I saw that same thing in the way that I've seen Hillary raise her daughter, Chelsea.


My mother lived without apology. Whether you liked her or not, was secondary to her. She did what she had to do, without a worry about fitting in with the women of our 1960s neighborhood. She began working full time in the 1940s, at time and in the country of South America, when women didn't. In the '60s, she had come to live in the city of Milwaukee. Women then needed their husband's signature to get a credit card. My mother talked the bank manager into allowing her a card, for the necessity of her children, she explained. "Never take no for an answer, you keep asking," I remember my mother walking us back from the bank, my hand in hers, after she was given a credit card of her own.

It wasn't until we had made our peace as mother/daughter, that she astounded me when I thought back on all she had to overcome in ethnicity, culture, gender, and language. To my mother, there was no such thing as allowing things to happen "as a man's world," though she was plunked right in the middle of it and this world of ours as women, was one she didn't give in to or accept. She fought for her place because she knew no one else would for her.

Of women like this, we hear "ahead of her time," but what does that say about us? That we merely need to wait and equal opportunity and treatment for women will arrive on our doorstep? My mother didn't wait for chance to come her way, she showed her four daughters us to say yes first, and then make damn sure you worked hard and delivered. She would watch the news during the '70s with the rise of ERA, chewing on her thumbnail, she would tell me, "A woman, it's good to say something but if you don't do something, nothing will happen."

My mother passed away three years ago, on August 5, 2013. Now, when I remember her perfect moments, when she would unleash thinking none of us were really listening, we would hear her tell stories of how a boss who would take Friday afternoons off for pleasure but make my mother work through lunch to make up hours when she had to take one of her children to the doctor, to dealing with a plumber who quoted an outrageous amount to repair our bathroom than he quoted to our neighbor, Steve, next door. I would listen to her, and wonder, how did she find the fight to go on.

Because she always did.

When I lost my mother, I missed seeing a powerful, unstoppable woman in action.

But now, in Hillary Clinton, I see it again.

My mother is gone, but during this monumental presidential election, she will have cast her vote for the first woman president.

I know because I brought a picture of my mother along with me, the one of her working her first job when she was 14 years old.


I set it down on the ballot, and together, we both voted for Hillary.