When I heard Tbilisi was known for its ancient bath houses, I put them high on my sightseeing list. Who wouldn't love a relaxing spa day? But I had no idea what I was in for.

Georgia's capital was founded thanks to one thing: natural sulfuric hot springs. According to legend, 1,500 years ago King Vakhtang was hunting with his trusty falcon. Injured while catching a pheasant, the falcon fell into a small pool. The bird's body was retrieved...fully cooked. The poor creature was boiled to death. The king decided this would be the perfect place to pass the cold winters. He called it "Tbilisi," or "warm place." 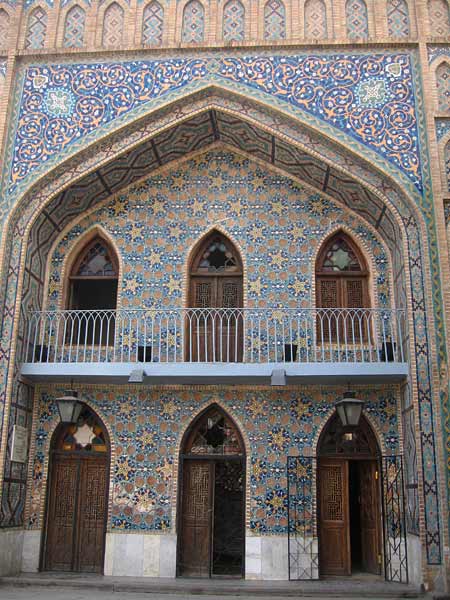 Ever since then, people of all classes and creeds have soaked, bathed, and warmed themselves in large, brick bath houses here. The one we chose for our adventure was hundreds of years old, and its facade was covered in bright-blue tiles. It looked more like a mosque than a giant hot tub. With bathing suits in hand, my husband and I trotted in.

This spa was different from those back home. There was no calming music or iced cucumber water, no perky hostess waiting to give us a tour of the facilities. Instead we walked up to a small office set behind glass. The lobby, while sparkling clean, smelled of stale cigarettes. A bustling beauty parlor was tucked into the corner.

In broken English, the office worker barked, "No man-woman together in group rooms. Together only in private rooms. You go see!"

While I waited, my husband ran upstairs to check out the men's area. He came down and giggled, "Let's get a private room. That is, unless you want to relax with 50-year-old naked men smoking cigarettes and drinking beer."

As we paid, the worker asked, "You want message?" 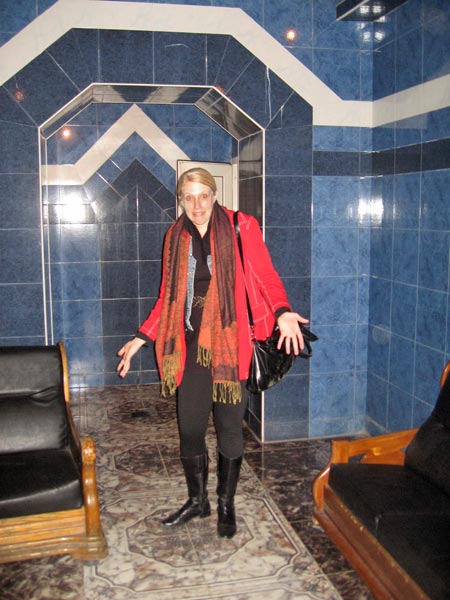 Our private room was actually two large rooms with a dressing area and a toilet. It was very clean but dingy, with modern and Soviet-era tiles. However, the spaciousness and the elegantly domed ceilings and arched entryways hinted at past luxury.

After changing into our suits, we nestled into the hot (albeit sulfur-stinky), five-foot-deep tub. Lounging there, it was easy to imagine a time when harems of naked women soaked, ate grapes, and drank wine in that same room. We floated and sipped beers. I even felt saucy enough to remove my bikini top.

Our peace was interrupted by a small white-haired man wearing boxers -- the masseur. I quickly reached for my top, but with a shooing motion he made it clear that it wasn't necessary.

His kind eyes and warm, toothless smile put us at ease. Through an elaborate set of hand gestures (he spoke no English and we spoke no Georgian), I was instructed to get completely naked and lie face-down on a large marble table.

With a firm slap on my back, he got to work. Using soap suds and what felt like a Brillo Pad, he began scrubbing every nook and cranny of by body. At first it felt nice, but with increased pressure and vigor, my skin quickly turned cherry-red and my few raised moles began to bleed. The force was so strong, he needed to show me how to properly grasp the table to keep from sliding off. He flipped me over. I felt like a large fish being descaled. He enjoyed pointing out the amount of dead skin flaking off of my body.

Next came the "message." With the full force and weight of his body, my white-haired friend tugged on my arms and legs, popped all of my joints, and worked my muscles like he was tenderizing a huge human steak. By the end, he was obviously proud of his work and sweating from exertion. I thanked him and sheepishly sunk back into the hot water. 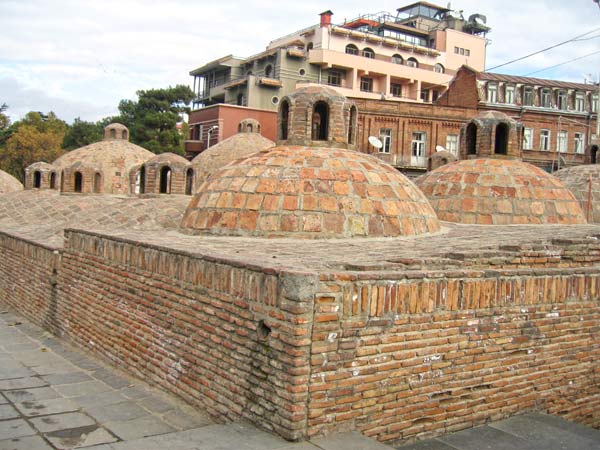 I never truly understood the term "squeaky clean" until then. There wasn't a lick of dead skin or oil left. I felt like a piece of Tupperware pulled from a hot dishwasher. I couldn't help but laugh at how much it...hurt!

After all was said and done, we emerged into the daylight dehydrated, physically exhausted, and still dripping dry. We leaned against a wall to catch our breath. As we rested, we watched hardy, working-class men walking out with a spring in their step, invigorated by the same scrub that had almost killed me. Humble old ladies proudly protected their new hairdos with bright silk scarfs. What a sorry sight we must have been to these well-groomed regulars!

That day I realized Tbilisi's famous "spas" aren't spas at all. They are bath houses...places for people without hot running water at home to bathe. The experience gave me a treasured insight into real working-class Georgian life and culture. And that was worth every inch of red skin.