Dear Sara: A few months back, I was at a friend's party and met a guy who, it turns out, I met last year at the same friend's party. We met very briefly and he made a great impression on me but I was feeling totally introverted and sort of scampered away from him. When we met this time, I was pretty determined to see if there was something there, and he was apparently on the same page ("I heard you talking about liking board games; we should play some time!"). So, we've been dating for a few weeks now and I feel ludicrously happy.

But that happiness is tainted with a sort of general relationship anxiety. I feel like that's not spoken to very frequently-it's like, either you're single and going on terrible dates and making fun of them with your friends, or you're in a relationship and things are figured out. For someone who's been single for years, I feel this added pressure that this might be the end of the road, and I better not screw this up! So I better not be too much myself and instead parcel out my "quirks" lest he run terrified off into the night. As someone who's not used to being in a relationship, how do I get over the intense pressure I'm putting on myself now that I'm dating a person I see a future with? -- R

Dear R: Such a good point! Those early days of a new relationship can be thrilling but also terrifying--especially if you've been single for a long time. I definitely understand that "last chance" feeling, and I think women in particular are encouraged to feel this way. But there is no deadline for finding love--it happens when it happens.

There's also no formula for making someone fall in love with you--despite what eight-zillion dating guides say. That's actually good news. Trying to do "everything right," trying to "not screw up" won't make your budding relationship go more smoothly. All it will do is make you feel nervous and freaked out.

Here's the even better news: You really can't screw this up. If he's right guy for you, he's going to like you despite--maybe even because of--your quirks and flaws. And if he's not the right guy, nothing you can do will change that.

That means you get to relax be yourself. That doesn't necessarily mean divulging all your deepest secrets. You're allowed to keep certain things private until this man proves himself worthy of this confidence.

"Be yourself" also doesn't mean "be a total slob." Sure, clean your apartment before he comes over. Get a new dress that makes you feel cool.

One nice thing about new relationships is that they often compel us to be our best selves. You suddenly realize that it's time to replace the sheets you bought in 1996, and to dig out those empty soda bottles from under the driver's seat of your car. When you're with your beloved, you're patient and kind when the waiter brings you the wrong entree. You're thoughtful and sensitive when your date tells you about his parents divorcing when he was seven. And you're up for anything: a sportsbar with his buddies? A hair band competition? A mime festival? Sure!

In other words, our new loves often compel us to come into closer alignment with our values--to live with more dignity, kindness and adventurousness. So rather than trying to be someone other than yourself, try being your highest self. This is easier than you might think, since that person has been there all along.

Sara Eckel is the author of It's Not You: 27 (Wrong) Reasons You're Single. Join her in Chicago on Oct. 8 for a reading and conversation with Jenniffer Weigel at City Lit Books. Or visit her at her web site, saraeckel.com, where you can get a free bonus chapter of It's Not You.

This article first appeared on eHarmony.com.

'How Do I Not Screw Up My New Relationship?'
Cards To Celebrate Being Newly Single 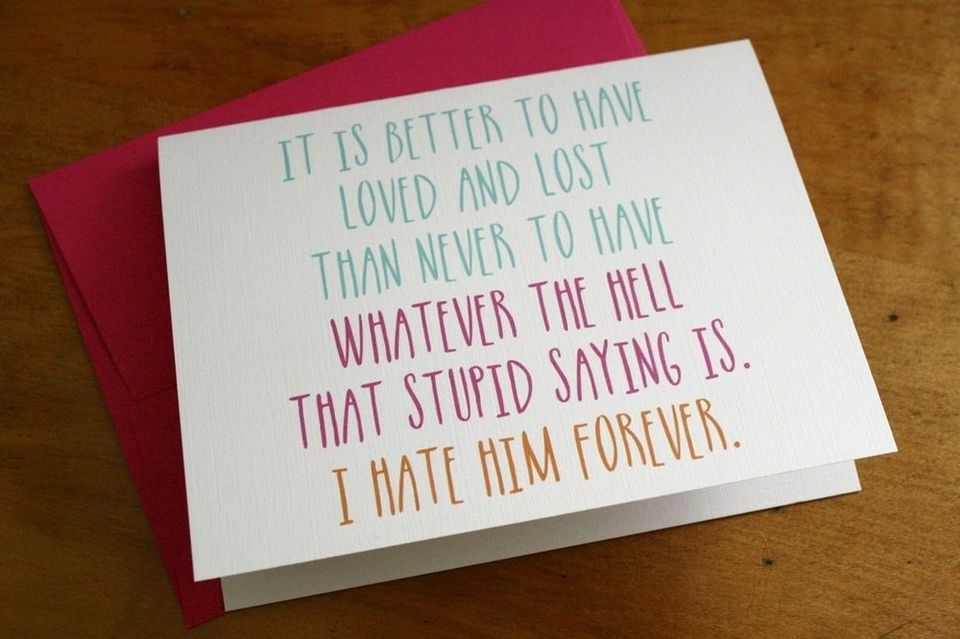