It was a freezing night in Brooklyn last month as I turned the corner towards Bar 4. A handsome guy with suspenders and a slight Southern twang was talking to someone outside and opened the door for me. Little did I know that guy, Ryan Langlois, was a member of the band headlining that night -- a group that (to my pleasant surprise) put on the best live show I saw in 2010.

This was the Third Wheel Band's album release party, and the small bar was packed. I couldn't remember the last time I saw this many people at a show for a band that wasn't famous. But they were famous -- at least within the microcosm of Bar 4, a place that has become a home for the act and their lively set. With barely any standing room left, the band stepped onstage to an overwhelming applause. The singer, Steph Allen, spoke softly to the crowd before playing, her petite frame and soft tone only misleading in that newcomers were simply floored by her powerhouse lungs.

The bluegrass act, made up of a drummer, an upright base, a mandolin and a harmonica, played a variety of up-tempo songs that were impossible not to dance to. The majority were originals, with the exception of a couple amazing covers, one of which was legendary blues singer Robert Johnson's "They're Red Hot." Among the originals was a song called "Benny" -- a song about a man the singer had dated. Apparently, "Benny was a little bit goofy and he had a bad cocaine habit." As they played, I looked around at the crowd. The audience was elated, miming every word and demanding an encore. It didn't take long for me to realize this band was perhaps one of New York's best hidden bluegrass treasures, and their underground following was strong.

I had the opportunity to sit down with the group at the Washington Square Diner after one of their shows. We spoke broadly of many different things, as well as their debut album On Willow Street -- an album recorded live in a few hours at, you guessed it, 66 Willow Street in Hoboken, New jersey. As we left the show and walked towards the diner, Allen was pushing her standup bass down the street while smoking a cigarette. When I asked her, in awe, how she gets that thing around New York City, let alone while balancing a cigarette, she responded, "Sometimes I have a cup of coffee in my hand too -- I guess I'm just used to it." She was a kindhearted musician and a bad-ass chick in one -- and one of the few girls I know who drinks straight whiskey.

The mid-20's bandmates write their songs collaboratively, and play about three or four gigs a month, some lasting as long as four hours. "We're pretty simple," explained Langlois. "We're just trying to have fun." When I asked about how they got their name, guitarist and vocalist Greg Barresi laughed, "When we got together, Ryan and Steph were dating, and I was always kicked out and asked to leave early. So I always felt like the third wheel." However, shortly after the band formed, (which, to my surprise, was only a year ago), the two decided to be friends. Now all the men, including drummer Dan Sieber, have girlfriends who (they beamed) "are very supportive."

The band owes their meeting each other to a man named Niall Connolly. Connolly, a well-known underground musician in New York City who hails from Ireland, organizes "The Bleecker Street Folk sessions." It was at one of these nights that paths crossed and the band came to be. It seems it's people like Connolly who are responsible for acts like this one growing more and more popular in New York.

As we finished our coffees, I began asking them about the future. Their answers were predictably modest -- "to play some gigs outside New York" (Allen) and "Just be better musicians" (Langlois). Shortly after, I noticed Barresi holding a shopping bag with a pair of pants in it. He explained how for the first time since he's moved to New York City, his pants split on the subway earlier that day. We all laughed and asked for the check.

Remembering a line from a track off the album, "NYC #1," that goes, "mama she told me, when I would grow up I'd be rich," I asked them what would be the first thing they'd buy if they made it big. They all smiled and were quiet for a minute, trying to imagine such a circumstance. Then, before getting up, Barresi looked up at us from his bag. "A new pair of pants." 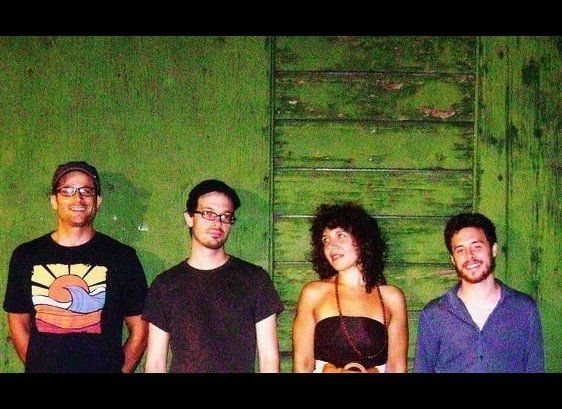