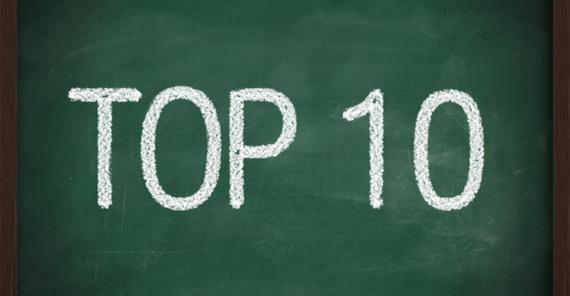 As a public service, I provide some for your entertainment and amusement as well as three core sources for continued and higher education in list learning....

Depending on your level of cynicism, I imagine you can argue that a list like the way couples annoy each other can help your relationship; that one on cheap food shopping, what you will miss from SkyMall or making a budget-fixed wedding is a public service; and that lists on the CIA and moon hoaxes -- not to mention serial killers -- increase our intellectual capacity...

In the December 2, 2013 edition of The New Yorker, Maria Konnikova wrote a wonderful piece titled "A List of Reasons Why Our Brains Love Lists."

Konnikova asks why we find these lists so compelling. Her take?:

The article-as-numbered-list has several features that make it inherently captivating: the headline catches our eye in a stream of content; it positions its subject within a preexisting category and classification system, like 'talented animals'; it spatially organizes the information; and it promises a story that's finite, whose length has been quantified upfront. Together, these create an easy reading experience, in which the mental heavy lifting of conceptualization, categorization, and analysis is completed well in advance of actual consumption--a bit like sipping green juice instead of munching on a bundle of kale. And there's little that our brains crave more than effortlessly acquired data.

The upshot? It takes the effort out of using our minds.

Or as psychologists Claude Messner and Michaela Wänke found:

We feel better when the amount of conscious work we have to do in order to process something is reduced; the faster we decide on something, whether it's what we're going to eat or what we're going to read, the happier we become. Within the context of a Web page or Facebook stream, with their many choices, a list is the easy pick, in part because it promises a definite ending: we think we know what we're in for, and the certainty is both alluring and reassuring...

However, Konnikova wisely (in my opinion) concludes:

Faced with a detailed discussion of policies toward China or five insane buildings under construction in Shanghai, we tend to choose the latter bite-sized option, even when we know we will not be entirely satisfied by it. And that's just fine, as long as we realize that our fast-food information diet is necessarily limited in content and nuance, and thus unlikely to contain the nutritional value of the more in-depth analysis of traditional articles that rely on paragraphs, not bullet points.

Seems to me the future of the world will be decided by those who truly understand the nuances of China policy versus those who can list the top ten most popular dim sum choices in San Francisco's Chinatown.

It amazes me how even in a business context we get seduced by the top ten ways to make money... or win business... or beat the competition -- as if anyone who actually had that magic would just give it away... and most don't -- it's usually a come-on to buy access to services or more lists.

Therefore, here is the only top ten list I will ever do (beyond my favorite music; movies or books... maybe):

Or maybe it's best said this way. Listen:

We don't need lists of rights and wrongs, tables of do's and don'ts: we need books, time, and silence. Thou shalt not is soon forgotten, but Once upon a time lasts forever." - Philip Pullman

And there you have it. The Bible endures, the Koran, The Iliad, Sherlock Holmes. As for the list of best-dressed football players at a post-Super Bowl party...