My sons, who I have had since they were babies, adopted from foster care, are both 11-years-old. They both still believe in Santa Claus.

I take full responsibility for this. One skill, that those of us who have spent any time in a closet learn (I am a gay dad), is how to create the illusion of life as those around us want it to be, rather than what it necessarily is. After a solid decade of hiding and building facade around my sexual orientation, doing the Santa gig was a piece of cake, all the way down to photoshopping "proof" of the big guy standing in the middle of our actual living room.

Now my kids are older and they have a bombardment of friends who "know," and are eager to tell them their perspectives. One close friend has already informed them that Santa "does not exist." My son Jesse dismissed the notion. "He does not exist for HER because she no longer believes," he let me know.

My dilemma has been brewing for two years -- do I tell them, or do I let the natural information from their peers take over? There is nothing about option two that I find attractive. I would rather be upfront about it, and take the hit, the disappointment and even the anger rather than be talked about behind my back, lose the management of the information and look like a fool.

That's settled. There will be a talk. Now... what to say? As I was trying to formulate my thoughts on this again this year, (I went through this last year too and bailed), the Christmas season arrived despite my best efforts to delay it.

One of our family traditions is for us to cuddle up in our big easy chairs, turn out the lights and watch the movie The Polar Express. In case you are a Christmas-milieu Rip Van Winkle and do not know The Polar Express, it is a magical production where doubting kids are taken late at night on Christmas eve to the North Pole to witness the departure of Santa Claus and to possibly receive the "first gift." One of the sub-plots of the movie is that those who "still believe" can hear the tinkling sounds of Santa's sleigh bells, and that those who no longer believe, can't.

As we sat this year in the dark, all of us breathing in captive wonder, I found myself tearing and emotional as the lead character shakes the bell and the tiny tinkle of belief peels out. I wanted to gush out in sentimental sobs, until the thought crossed my mind... "Wait a minute, bub, aren't you the dude planning on how he is going to tell his kids that there is NO Santa. What's with the tears?"

After the movie, I went upstairs and looked at a painting displayed there. It was one that I got in a gift exchange from work two years ago. That year, I had suggested we all give each other only hand-made things that reminded us of the person to whom we were giving the present. My gift was from my friend Tara. It was a simple blue painting that reads: "I still believe..."

I was looking at that painting when I put my foot down. "I DO still believe."

The next day, my sons wrote their letters to Santa Claus and gave them to me for their "safe" delivery. I asked them if they wanted to go see Santa at the mall. "No," they both responded matter-of-factly. When I asked why, Jesse looked at me with a twinkle in his eye and said, "We wrote to him. I think we are covered. Besides, I want to see if by not going to see him, he gets worried and picks me up this year for the Polar Express." Uhhh ohhh.

There will be a talk. It won't be the one I planned on giving, but instead, it will be the one that I truly... believe.

Here is my open draft:

Hi guys. I have been meaning to have this talk with you for some time now. I can have it now because you are getting to be grown up. You can take part in things in a way that you could not as little boys.

You know about the mystery and the magic of Christmas. You've experienced it. Everyone we know is caring, shopping, giving and sharing. The world is transformed, brilliant and electric. You go to bed on Christmas eve, and when you wake up on Christmas morning, magically, intriguingly, Santa's gifts to you are here, and your stockings are full.

You know how magic works. We've been to magic shows where we have witnessed things appear and disappear, things created out of nowhere. Those shows have taught us one thing -- that things may actually happen in a different way than we think we see them happening. They are the wonder of "illusion."

The illusion around Christmas is that Santa comes, flies the whole globe and pops down chimneys even where they don't exist. Many have imagined exactly how that happens. We have seen all the movies. They imagine different kind of sleighs that he arrives in, who the reindeer are, and what elves really look like. All of these are created in our minds. We can't prove or disprove any of them -- like the magic trick we see on stage, we can only guess what the truth is about how it is done.

Santa Claus was born almost 2,000 years ago, only a few hundred years after Jesus. He lived in Turkey. He was an important man there, and he became famous for giving.... secretly. He gave so that the person receiving the gift did not know who it came from. 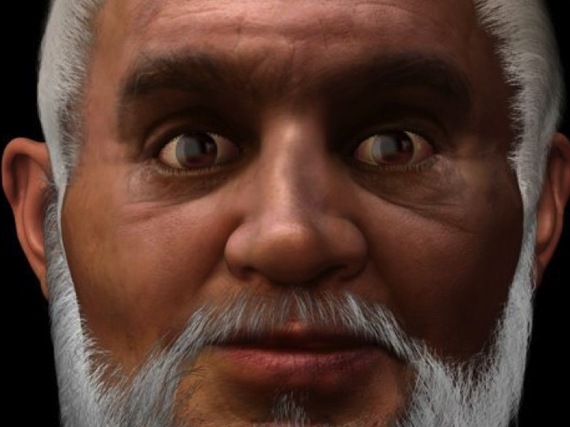 He is jolly and portly, with a white beard. His skin is darker than you may have seen and he has brown eyes. Of all of us in our family, he looks most like Jason. It really doesn't matter though, because he is much bigger and more powerful than what he looks like. His name then was Nicholas.

Santa Claus, the spirit, is so huge that it made everyone get creative and want to give secret presents and surprises every Christmas. As we did, we all imagined who Santa is and how it all would get done. That is how the illusions came to be.

What does that mean for us? Who brings you, Jesse and Jason, YOUR Christmas presents? I am sure you guys have ideas and theories to solve that mystery, but I have a better idea. Don't solve it. Let's let it stay a mystery.

You may think it is Santa in a sleigh, or Saint Nicholas and his magic spirit, or that he has a helper that sneaks in and gets things done. You might even think I have something to do with it. I am saying: it doesn't matter, and you guys can guess whatever you want. I will neither confirm nor deny any of it.

Here is what IS important. You are now old enough. You are now responsible enough. It is your turn to help out Santa Claus, Saint Nicholas. You are old enough to start imagining how you can give to others in secret, not to get thanked, or praised, but just to make them happy. I did it one time like this, for example: I was in a restaurant where a young couple helped an older couple who were struggling entering the restaurant. They were all strangers, but had kind hearts. I caught the waitress and told her that I wanted to pay the helpful young couple's bill without them knowing. You guys were there and asked what I was doing and I wouldn't tell you. She took care of it for me. The couple was very happy and wanted to thank whoever responsible, but they couldn't, because they did not know who I was. They would have to just push it forward and do a "Saint Nicholas" for someone else.

That is how it works. You guys are already doing it, and I am very proud of you. You have thought of things people in our family would like, things that would make them happy. That is where your imaginations have gone. You are doing Saint Nicholas, you are being Santa Claus.

The miracle of Christmas is not in what we get, and it is not in what we see. It is in what we feel, what we imagine and what we give to create love and happiness. I want you two to never let anyone take that away from you. Your feelings of Christmas, your inspiration on what to do to make others happy and the love we have for each other... those are all invisible, but they are the most real things in the world. I believe in them with all my heart, and I hope you do too.

There is only one thing I believe in more, and that is you.

I am sorry if there are other questions around our own Christmases of which you may not feel you are getting answers. How did you get what present, when and how did whoever got it for you know? As I said, I cannot confirm or deny who that person is or how they operated as an agent of St. Nick. St. Nick does not want identities to be known.

What I can tell you is: that person, loves you more than anything. They feel that every gift you got, you deserved and more. That is the most important answer you will ever need to know.

Merry Christmas. Show me the Saint Nicks I know you can be. I love you. Daddy.