Let me preface this by saying: the world and the Internet can be wonderful and terrible, and sometimes it's easier to just pretend the garbage people don't exist in either place, but they do.

They do, and sometimes they drop some flaming dog shit on your doorstep and you realize, alright, let's do this.

A few weeks ago I had an incredibly condescending and offensive experience wherein a very drunk man approached me to tell me I should smile.

He clearly thought it was a way to flirt with me. You know, hey, I've been watching you (his opening line, not in any way unsettling for a woman to hear) and you should smile. You just don't look very nice when you're not smiling.

For context: I was manning the Still Kickin booth, hugging strangers and friends every ten seconds and crying with people over their dead people and my dead husband.

I was not charmed, and afterward I posted the first picture you see below.

For those of you thinking, "Wait, wait, Nora. A man can't tell you to smile? Lighten up."

Men don't get told to smile like it's their job. I don't go up to men and say, "Hey, smile! You're so HANDSOME when you smile!"

Why don't I do that? Because it's weird and rude and it's none of my business if you smile or not. I don't know you, I don't know what you're going through. And you don't exist to mold yourself into whatever I think you should be. Isn't that cool, that you're an autonomous person?

So, after that incredibly irritating exchange, I posted this on Twitter. 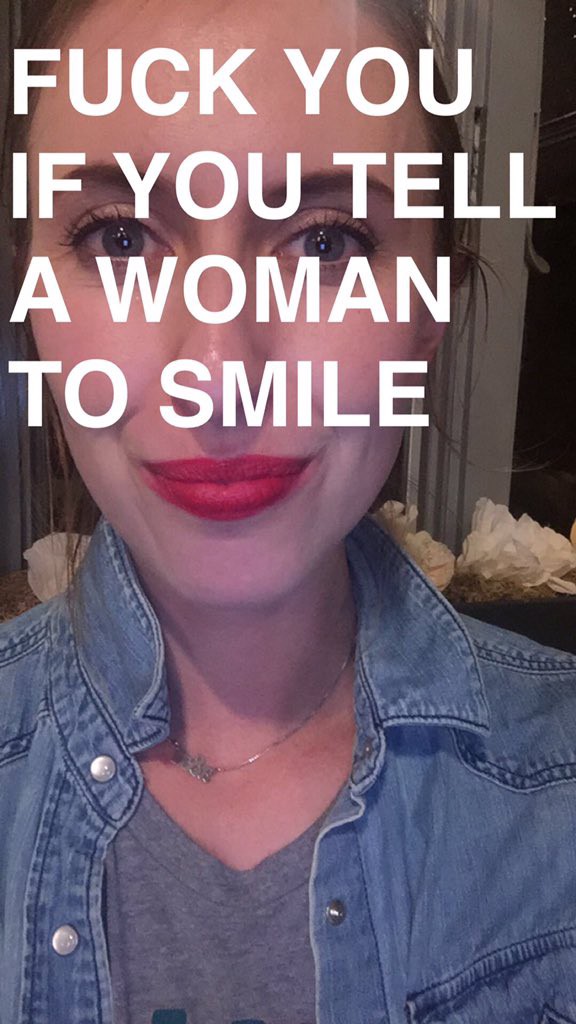 When you're fresh off crying in public and fundraising for ur nonprofit and a drunk dummy is like, you'd be prettier if you smile and you're like, nah no thanks.

And today -- weeks later, mind you -- some boy who trolls Twitter looking for feminists found it, and RT'd it with the sole purpose of getting his 15K followers to light me up. And, they did. 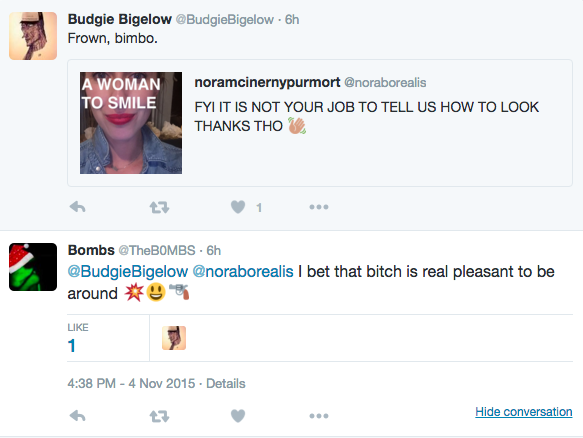 Oh. Reverse psychology. I get it.

Great engagement, very proud of you and your followers.

Someone read The Game!

The default: she's an idiot, she's a bimbo (which what? Okay, thank you for your '90s insult, buddy), and the photo you see below. 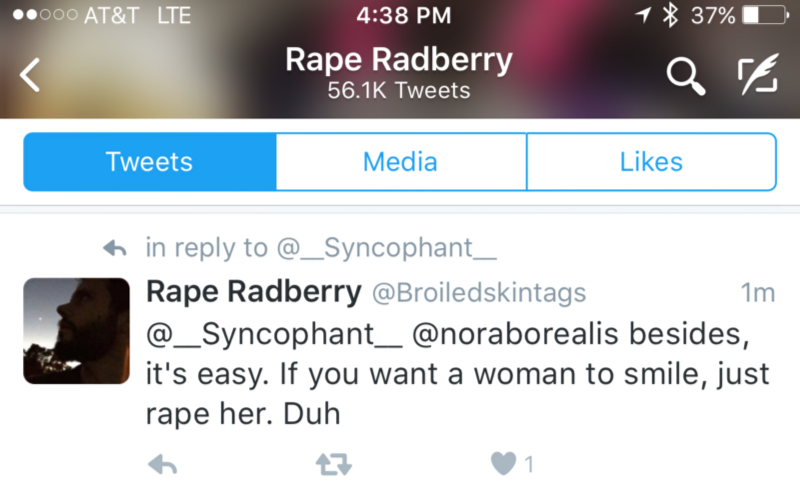 Thanks for the mention, real chill way to end my workday. 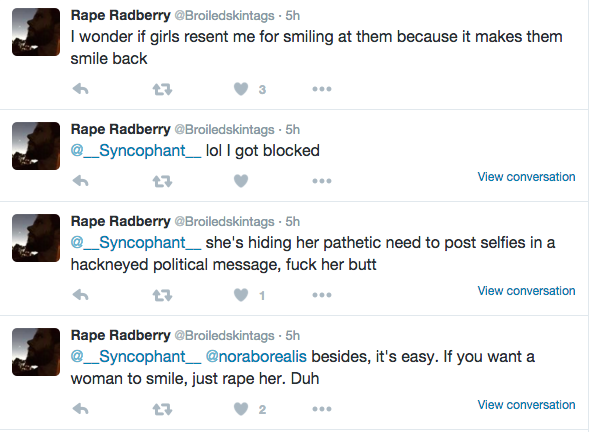 Please note the disdain for selfies, it will be important in like two minutes.

And even though I wanted to reply, to put each of those scared little baby men in their place, I held my tongue, I privated my account, and I waited in my car outside Ralph's daycare until my hands stopped shaking and my heart slowed down.

I did this because unlike these men, with online pseudonyms, it's me online. My face, my name. And because I am afraid of retaliation, I had to hide on the Internet the same way I'd have to run and lock my front door if this man had said that to my face.

That. Is. Rape. Culture.

It's a group of men who are so threatened by the existence of female opinion that it's nothing to them to toss off a tweet like that. Because, can't I take a joke? Because, why am I such a bitch when a man just wants me to smile? Because, what business do I have posting a *gasp* selfie and telling men how to treat me?

This exchange, in the big scheme of things, is nothing. Really, these people are nothing to me and I could just keep ignoring it and pretend it never happened and hope that they let me slide out of their part of the Internet and stay on the sunny side. I've watched my husband die in my arms so on the scale of Shit That Matters, a few tweets... don't.

Even in the big picture of the cesspool that is Twitter (Jack, dude, get it under control), this is nothing. Women experience worse. Every day.

That's why this matters.

It matters because this happens to every single woman you know. Every. Single. Woman. We all have a story like this. From real life and from online. A story where we are made to be scared and shut up because we said something or did something that a man didn't like.

But what they represent is colossal: the vile, brewing hatred in anonymous corners of the Internet. Because these aren't just names on a screen. These are people we share the earth with, who hate us, immediately, for daring to have an opinion on how we are treated. Whose default response to a woman saying she doesn't want to be told what to do by a drunk ass stranger is swift and violent and meant to get me to shut the hell up.

Don't react, one of their female followers told me, if they sense a weakness they will shred you.

Well, here is my weakness: I'm alive and I'm a person. I don't like when assholes tell me to smile. I don't like being told to be quiet, and I don't like having to turn the other cheek because strangers on the Internet could doxx me or light me up all day long because they don't like big mean feminists.

The same way I don't like to be afraid of rape and violence, because only 5 percent of rapists are ever convicted, because misogyny is real.

I want to feel safe in my body and in my corner of the Internet. I want that for you, too.

I don't know who this guy is, and I bet he's got a mother who loves him and he is kind to some people and pays his taxes on time. I don't know what happens to people to make them this way, I just know that women deserve better and that there are rules:

You don't get to make me lock my account.

You don't get to make me afraid.

You don't get to hide behind a pseudonym when you post selfies, talk about rape and use the N word freely and say, hey, we're just funny it's so funny to be a jerk don't you get it you dumb little lady with your tiny little lady brain?

You don't get to do that. 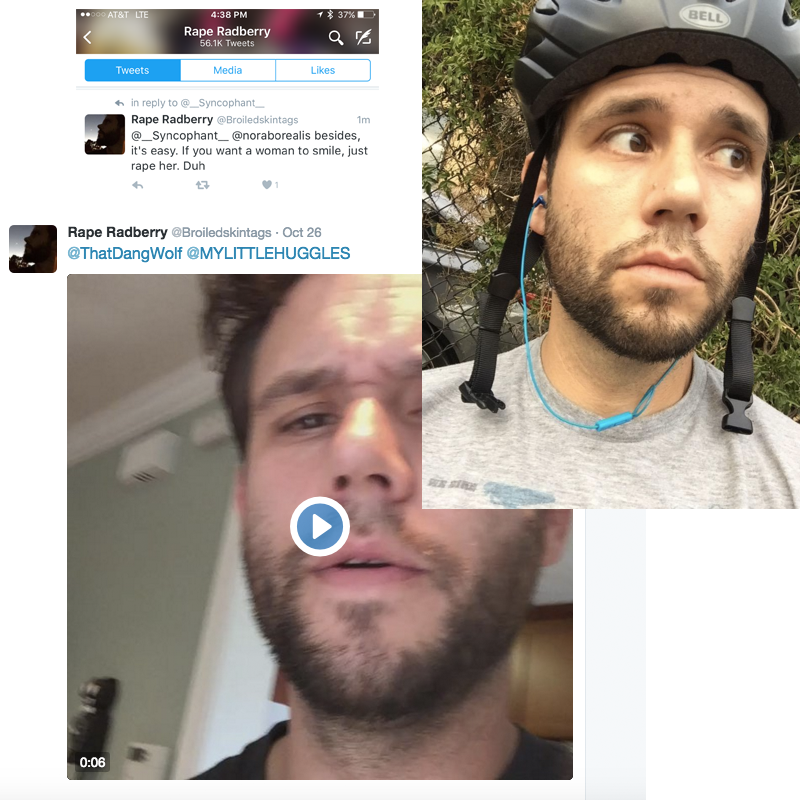 Now who has a pathetic need to post selfies? Oh, that's right, ALL OF HUMANITY.

Weapons Women Carry With Them To Fend Off Attackers