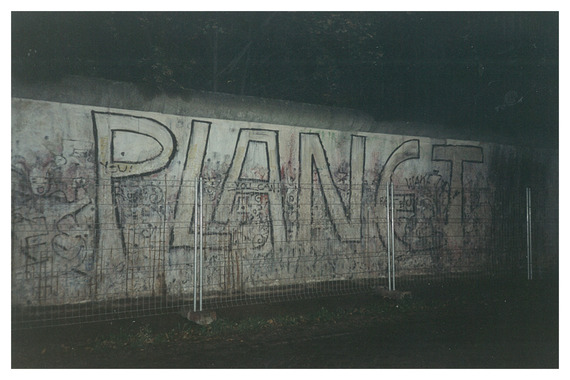 It was late on a clear chilly night in the fall of 2000 that, for the first time, I caught sight of what's left of the Berlin Wall.

An American baby-boomer with wide-eyed notions of WWII, particularly its aftermath, I had remembered watching in disbelief when TV network news showed protesters beginning to tear down the thing in 1989 - an iconic image seared into my brain like Neil Armstrong walking on the moon or Jesse Owens winning gold in the 100 meters at the Berlin Olympics. A visit to the symbol of communist repression immediately became part of my bucket list.

Built by the now-defunct German Democratic Republic in the early 1960s, the Wall separated East Berlin, occupied by the former Soviet Union, from West Berlin via a split negotiated after the war by the superpowers. Despite the 96-mile-long concrete obstacle, an estimated 5,000 people from the East still managed to escape to freedom in the West from 1961 to 1989, but another 100-plus lost their lives trying, many shot by East German border guards.

As communism collapsed in the early 1990s, most of the Wall was destroyed. But a few parts still stand, the most famous being the 4,320-foot-long East Side Gallery with more than 100 colorful paintings between Warschauer Strasse and the Ostbahnhof.

My focus was a less obvious, smaller section. My German friend, Rita, and I were headed to Potsdamer Platz. It wasn't for drama that we traveled under cover of the dark. There's an unwritten rule that tourists are not to take pieces off the remaining Wall, for obvious reasons. But in addition to seeing the thing, I wanted a souvenir, and this seemed like the surest way to get one.

Armed with hammer and screwdriver, and dressed in nondescript clothes, I felt a bit like a cat burglar -- I was nervous but also excited. Rita was more amused than anything else -- why with this crazy American wanting a piece of the Wall! -- and she humored me as we crossed a final bridge approaching the landmark. My pulse quickened.

After a check for passersby, I removed the tools from my jacket pocket, set the screwdriver firmly on a protruding section of grey, graffiti-strewn concrete and smacked it with my hammer. Nothing happened. I hit the driver harder, and a little piece fell off. I gathered it up in a pouch, along with some dust that had also crumbled off. I whacked it again, and another piece fell into my bag.

The rush was unexpected. It was as if the entire Cold War, bottled up inside me since age six, spilled out: Sputnik and the space race, the Cuban missile crisis, Soviet tanks on the Czech Republic's bridge, the duck-and-cover drills we practiced in elementary school in case there was nuclear war.

Rita, intrigued by my reaction, took her turn. Like me, at first she had trouble trying to stay quiet and still hit with enough force to dislodge something. After a few tries, she too got a chunk. We took some photos.

Sirens wailed in the distance just before we left, probably for a car accident somewhere in the sprawling city. But with Cold War paranoia still intact, I was convinced the commotion was for us, and that we had better hi-tail it out of there. Rita chuckled, a big belly laugh really, saying the last thing German police wanted was to bother an American over a piece of old cement. They had better things to do.

Later, I shook some of the Wall dust from the bag, taped it to a postcard and shipped it off to my parents as a souvenir. Rita, who originally thought my idea was dumb, now said she was happy to have her own piece of the Wall.

A few days after, we visited Checkpoint Charlie, with its famous museum of memories and relics from bygone days as a border crossing between the East and West. The place was fascinating and, to my surprise, hunks of the Wall were on sale there for between a few hundred and a few thousand dollars. Some were really impressive, with old metal rebar wire protruding from the concrete, like tentacles. Though tempted, I didn't buy any (they were probably real, but who knows?).

Safely back at my hostel were the smaller pieces -- ones I had chipped off -- and those were good enough for me. I had left my own mark on the Wall, however insignificant, by lessening its mass by just a smidgen, and maybe just a smidgen late.

Jim Clash, an Explorers Club Fellow and adventure journalist, is author of "Forbes to the Limits" (Wiley, 2003) and "The Right Stuff: Interviews with Icons of the 1960s" (AskMen, 2012).