It is time for me to make a confession to the people of my hometown in Lakewood, Ohio. In the summer of 2014, I brought illegal contraband into the confines of the city. Like a bootlegger during prohibition, I drove into the little suburb of Cleveland during the cover of night with my booty hidden in tow. No, it wasn't 10 cases of the finest hooch this side of the Appalachia; it was a 50-pound pit bull named Calliope.

I wasn't always a criminal. Mom and dad raised me with the same values as any good Midwestern parent does. This ranged from the stay-out-of-jail basics, to finding things to do that weren't in front of the television, to being open and accepting of all walks of life. The latter wasn't difficult. Despite its tiny 6.69 square mileage, Lakewood packs a big city's amount ethnicities, culture, and lifestyles. Growing up there exposed me to all of them. Nobody paid any mind if you were a homosexual, a "grip the gun and flag" conservative, a "let's stay PC, bro" liberal, a political refugee, a Muslim, an immigrant, a Jehovah's Witness, a junky, or a jock. I grew up with all of them and we all cried the same tears at the end of each Browns game.

However, in 2008, the openness of the city I had grown accustomed to had changed. Piggybacking off of Ohio's dangerous and vicious dog ordinance, which deemed that all pit bulls were vicious from birth, Lakewood passed a ban on these types of dogs altogether. Even though Ohio has since removed specific breeds from the ordinance and now just focuses on each individual dog's behavior, Lakewood's ban is still holding strong. After the ban was put in place, people could no longer adopt dogs that were deemed to be pits. Lakewood's council members claimed this was an attempt to make the city safer, when in reality it prevented good dogs from being able to find homes, forced respectable citizens to move, and created criminals out of ordinary people by forcing them to keep their family pet under the city's radar.

I didn't agree with the legislation but I also didn't dwell on it. I was finishing up college and planning a move to California after graduating. Dogs and the consequences of breed specific legislation were not on my mind. A couple of years later, I settled in San Francisco, met a pretty lady named Malli and moved in with her.

After several years in SF, Malli and I decided to move to New York City and were in the planning stages for the move. A dog simply wasn't something we were in the market for with a 3000-mile move across the country on the horizon. However, my coworker who fosters rescue dogs brought a brown and white mixed-breed pup named Calliope into the office to say hello. As I walked in, she was obediently lying on the ground basking in all of the attention of the girls in the office as they surrounded her saying "you're so cute!" in various forms of baby talk. Something happened when I stood there admiring her docile demeanor as she coolly looked up at me with her heart-shaped nose and doey brown eyes.

"Okay...okay" I thought to myself, "from this point forward, I will never allow any harm to come to this creature."

After Malli and I signed the papers making us Calliope's legal guardians, I had unknowingly joined a coveted group of dog owners. I was now a pit bull person. It was at that point I had learned pit bulls aren't actually a breed; it is simply an umbrella term of many different breeds that fit within certain characteristics. Being a rescue dog, we didn't know what exactly she was, but I knew that her large, dimpled smile, short fur, and big, blocky head, would be associated with pit bulls. I was perfectly comfortable with that. 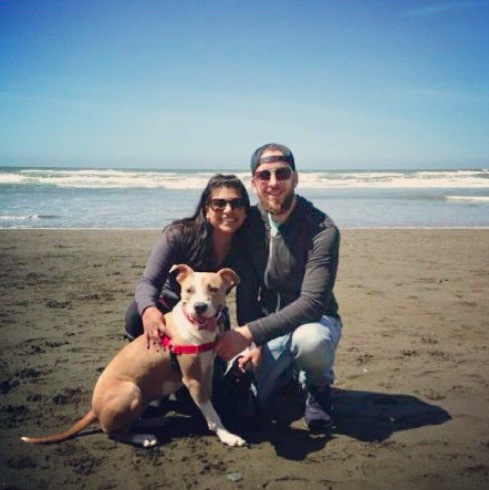 Similar to purchasing a car then noticing the same model every time one passes, I began to take note of all the pitties I walked by. I found myself reading about the controversy and misconceptions about these dogs. I learned that 1000 - 3000 pit bulls are put down every day, and that breed specific legislation not only prevents families from adopting these animals in need, it also instills the mindset that these animals are inherently aggressive. This leads to a reluctance to adopt, thus adding to the death count.

I also read about the stories of devotion these dogs have to their people and their patient demeanor with children. I saw these characteristics in Calliope as she instantly latched onto Malli and I and greeted children in the park with licks to their faces. I soon felt connected with the proud owners who are trying to end the discrimination that their furry companions constantly face.

Pit bulls were just another type of pooch before I adopted Calliope. Shortly after, I was a few paw prints away from protesting whichever team would sign Michael Vick.

Since Calliope would be categorized as an "aggressive breed", most airlines make it difficult to fly with her. So, my new family and I decided to drive across the country making a pit stop (pun so very intended) in my old stomping grounds of Lakewood.

As the entire country rolled by during the drive, our girl sat gracefully in the back seat as the only world she even knew fell further away.

The night we entered unfriendly territory, we all were weary-eyed and antsy from being in the car since Des Moines. We passed the Rocky River corp limit on 90-E and hit Lakewood's perimeter at roughly 10 pm on May 24th, 2014. Calliope stood up and licked her chops with excitement when we slowed down getting off the freeway since she learned that the slowing of the car meant that she could soon stretch her legs. I didn't have the heart to break it to her that she was now illegal contraband and could be taken away by the faceless brutes of animal control.

To avoid drawing attention, I drove inconspicuously to a safe house where we could keep her - my parents' place.

With respect to keeping this a full confession, I should admit that I had plenty of co-conspirators after we arrived. On top of my aforementioned parents, there was my niece, Madison (feel free to let me know if I should provide contact information for her arrest). Our trip to Ohio coincided with her fourth birthday party and she was excited to celebrate it with her new "puppy cousin." 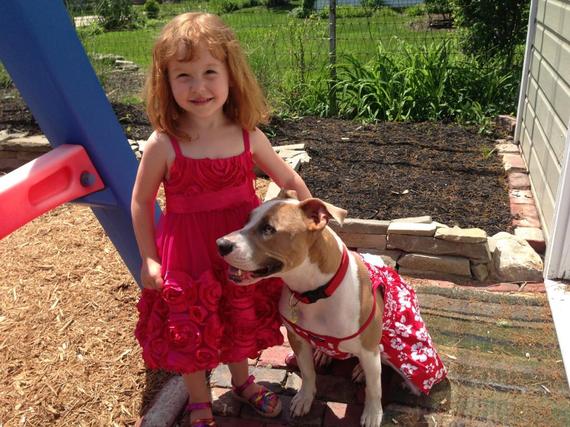 As soon as Madison and Calliope met, they were like two pups in a playpen. Calliope greeted her with some doggy kisses to her face while Madison giggled. The two youngsters were inseparable thereafter. This made it easy for Malli and I to leave Calliope in Ohio while we went to New York to lock down an apartment. We decided to leave Calliope with my niece at my sister's house so the new BFFs could spend some more quality time together while we got our lives situated out east. We planned to come back a month later pick her up.

Yes, residents of Lakewood, you read that correctly. My vicious K-9, that only attacks by exuberantly licking faces and blowing farts powerful enough to clear a room, crashed your peaceful little suburb for an entire month. During this time, Calliope was running around with her big pittie smile on her face while on playdates with the neighbors' dogs and spent her naps cuddling with a toddler, all of whom were operating outside of the confines of the law. She was taken for walks by the houses that rest the melting pot of families, the schools that educate through diversity, and among the local government that seemingly embraces all walks of life - while hypocritically not accepting hers.

You now have my full confession and am happy to receive my punishment.

Lakewood, Ohio has currently deemed a 4-year-old with cystic fibrosis as a criminal and may take her dog away. Sign the petition to allow her to keep this member of her family.