I have read (and reread certain sections of) the entire 601-page Senate reauthorization draft of the Elementary and Secondary Education Act of 1965 (ESEA), written by Senators Lamar Alexander and Patty Murray and named the Every Child Achieves Act of 2015.

I have also read the 29 amendments that were added to the Act as it gained approval from the Senate Ed Committee on April 16, 2015.

During this massive undertaking, I have had individuals asking about my position on the Senate ESEA draft. Even though some of my posts include glimpses into my thoughts about the Alexander-Murray draft (and now, its included 29 amendments), I have not yet offered a summative word regarding my opinion of this proposed ESEA reauthorization.

I will do so now.

Until something happens, whether that "something" is a new version of ESEA or killing ESEA, school districts across America are stuck with George W. Bush's infamously ridiculous and punitive version of ESEA known as No Child Left Behind (NCLB). In short, NCLB told America that there would be "100 percent proficiency in reading and math by 2014″ or else teachers, administrators, schools, school districts, and states would pay. The premise of NCLB is that teachers and administrators could be scared into producing a never-before-known (in any country) level of test-centered "proficiency." And states were set up to "prove" they were on the road to this perfection by setting up their own "adequate yearly progress" (AYP) toward this perfect goal, which was perched precariously on the test scores of at least 95 percent of a state's students. Not achieving AYP could result in dire consequences, including the firing teachers and administration as part of school "restructuring." (For an excellent summary of NCLB consequences, see Diane Ravitch's Death and Life of the Great American School System, pgs. 97-98.)

As one might expect in such a ridiculous high-stakes situation, in an effort to avoid NCLB consequences, states gamed the system to create AYP goals that they could achieve.

An entire nation of school districts boasting "100 percent proficiency in reading and math by 2014″ was not to be, and any individual with a sliver of common sense knew it.

So, 2014 has come and gone, and states remain under NCLB until ESEA is either completely done away with or redrafted and reauthorized. And by "under NCLB," that means states are subject to the likes of US Secretary Arne Duncan's NCLB "waivers," in which he has decided to leverage control over both state standards and teacher evaluation. Otherwise, without one of his "on my terms" NCLB waivers, Duncan can declare any state as having failed to meet that unrealistic NCLB goal of "100 percent proficiency in reading and math."

Stupid, I know. But that is where we are (and where we remain) until something happens to dismiss or replace the ESEA version known as NCLB.

Now, I mentioned that one option is to completely do away with ESEA. That is my preferred position, one that I wrote about on February 1, 2015. That post included an email I wrote to Alexander in which I suggested that ESEA be sunsetted in favor of separate block grants.

The reality is that ESEA will not be laid to rest. It will continue, and either Congress will fail in its efforts to reauthorize it and default for another seven years to NCLB (which means NCLB "waivers")-or- Congress will reauthorize a new version of ESEA.

There are two versions currently in the running, one originating in the House (Kline's HR 5, the Student Success Act) and the Senate (Alexander and Murray's Every Child Achieves Act of 2015). Both bills propose to retain the mandatory annual state testing in grades 3 through 8 and once in high school in both English language arts (ELA) and math. Both bills encourage charter school growth and expansion. Both include language forbidding the Common Core State Standards (CCSS) as a federal mandate. HR 5 includes language to make Title I money "follow the student," which would be an accounting and budgeting nightmare.

I think the Senate draft is the better of the two bills. It appears to be a true, Republican-Democratic negotiation that could garner the votes needed to rid America of NCLB (and Duncan's waivers), and it does not include portability of Title I funding.

As for the charter love in the Senate ESEA draft, I do not support the encouragement of dual or competing schools or school systems (i.e., traditional public schools placed in the position to compete for funding and students). The draft does not tell states that they must allow charter schools. However, the presence of the Title V grant (for charters) is meant to entice states to consider allowing charters if they haven't already and expanding the number of charters if they do.

The Senate ESEA draft language for Title V also has a couple of two-edged swords. First, like the draft in general, Title V attempts to remove the stigma of too much federal oversight by relying on the states to monitor their own "highly autonomous" charters. Also, Title V expects that charters will "leverage the maximum amount of private-sector financing capital" (Senate ESEA draft, pg.401). So, how well those "autonomous" charters are regulated (a contradiction on the surface) is left up to the state, for better or worse. Too, the public-private-funding hybridization makes charters that much more difficult to audit, for they can hide behind their "private entity" status if the state pushes for an accounting of public money.

I have no use for Title V, but like the annual testing, federal love for charters will not be going anywhere anytime soon- not so long as charter backers have the hefty cash to buy lobbyists.

And now, as to the testing:

I do not like the annual testing in either ESEA proposed reauthorization bill. America is over-tested, and all we have to show for it are thriving testing companies and education entities' learning to either game the testing system or risk losing funding (or even going under altogether).

The manufactured panic that America must score well on standardized tests is ludicrous in the face of our continued presence as a thriving world power.

The idea that standardized testing is a necessary condition for equality in the classroom, that "kids who aren't tested are kids who don't count," can only live if testing lives. If annual testing dies, then sorting students into "tested" and "untested" categories also dies.

My preference for the death of mandated testing noted, I realize that Congress wants the annual tests. I think a principal influence for retaining annual testing (and for not reducing the testing to randomly selected students even) is the influence of Kati Haycock and her Education Trust, which, along with others, including civil rights groups, petitioned Congress to keep the tests. (See here, as well.)

Throughout the Senate ESEA draft, the language clearly indicates Alexander's and Murray's intention to leave the details regarding the mandated tests up to the states. The language is also clear that there is no mandate for consortium-developed tests.

States might have to still give annual tests; however, in the Senate ESEA draft, these tests have no mandated length, and there is no requirement to tie test results to teacher evaluations. States can choose to evaluate teachers using student test scores, but the federal government wants to stay out of it. (See page 59 of the Senate ESEA draft.)

And the draft is clear that states do not need to submit their standards to the secretary "for review or approval" (Senate ESEA draft, pg. 33).

One of the ESEA amendments also addresses opting out of testing. (See Isakson's amendment in this post.) In short, the federal government does not want for any state to say that its opt-out laws are the result of ESEA testing mandates. This means that a state must still plan to test 95 percent of its students; however, a state can also support parental opting out because the state is offering the testing opportunity in which the parent chooses to have the child participate or not participate.

What I appreciate most about the Senate ESEA draft is the clearly- and repeatedly-stated prohibitions on the US Secretary, including prohibitions on state test selection.

The clear, repeated, detailed, and undeniable limits on the authority of US secretary of education and the absence of any discussion of Title I funding portability are my chief reasons for supporting the Senate ESEA draft. And I think this bill could realistically garner enough votes in Congress to rid us once and for all of NCLB. 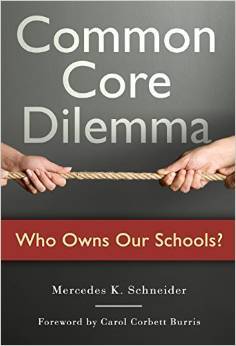