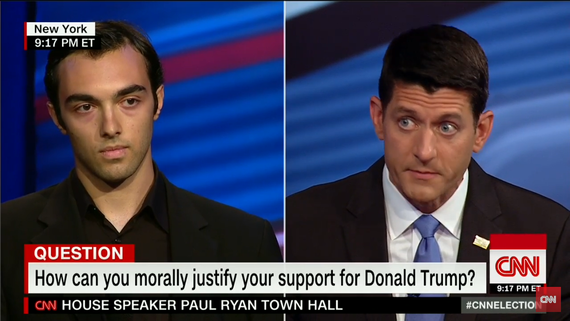 On Tuesday night Speaker Ryan responded to my question on the CNN Town Hall with what appeared to be an implicit recognition of Donald Trump's racist and Islamophobic nature.

I posed the following question, "I cannot and will not support Trump. It concerns me when the Republican leadership is supporting somebody who's blatantly racist and has said Islamophobic statements, wants to shut down our borders. How can you morally justify your support for this kind of candidate, somebody who could be very destructive?"

Paul Ryan responded by arguing that my position is equivalent to supporting Hillary Clinton. He went on further to explain that he believes that he can push more of the Republican agenda with a Trump presidency than a Clinton presidency.

I was not permitted a rebuttal but had I been I would have iterated the following.

First of all Mr. Speaker, what does Hillary Clinton have to do with the moral issue of supporting a racist? You have not denied Mr. Trump's racist and Islamophobic nature, and even if he isn't a racist he is certainly a symbol for such an ideology. I grew up as a Catholic as you did. I do not remember one homily that praised a leader for his/her prejudice and ignorance. Is there a moral foundation for the sponsorship of a man who denies fundamental rights to certain subsets of the population and who does not condemn the indiscriminate oppression of minorities (both historically with the Japanese internment camps and in the modern world with the ban on Muslims entering the country)?

Secondly, what price must our country pay for your party to push a conservative agenda? As a former Republican I do agree with many of your fiscal policies and your initiatives in foreign policy. However, one cannot support their implementation if such requires the placement of an ignorant firebrand at the command of the most powerful military force the world has ever seen. Have you forgotten about the unilateral power that the presidency holds? We do live in a nation of checks and balances, but the president can take radical action without the approval of Congress.

Mr. Speaker I could go on for pages about the dangers of Trump policy, but now let's turn to ideology and symbolism. Perhaps you recall John Winthrop's great speech at the genesis of American civilization, "We must always consider that we shall always be a city upon a hill - the eyes of all people are upon us." If you do not remember it from history class maybe you remember it from John F. Kennedy's 1961 address at the General Court of Massachusetts or from Ronald Reagan's 1980 speech on the eve of his election. What type of city shall we be if we elect Donald Trump as our mayor?

You see Mr. Speaker I believe in a certain vision for America. It's cliche but nevertheless fitting. America should always be the one place in the world where any individual regardless of his/her background can rise beyond the limitations of the human world and achieve what was once unachievable. Such is an America wherein all the peoples of the world can flee to find freedom and prosperity. How are we to persist as that beacon when we exclude the human inhabitants of our southern neighbor? How are we to persist if we exclude the 1.6 billion individuals who adhere to the faith so damned by the candidate you support?

You will never convince me, Mr. Speaker, that Hillary Clinton could be as destructive. I never thought I would support her in an election, but as an American I simply cannot bring myself to support a man so removed from the founding principles of our country.

Mr. Speaker, I am no longer a member of your party. I have left with many other young Americans and we will not return until you set your morals aright. I once thought that you were a good man, I hope that you can prove that once more.