20 years ago, 8,000 Bosnian men and boys were massacred by Serb forces in the worst genocidal event since 1945. In 1945, Serb forces massacred Croatian soldiers that included my grandfather, leaving my mother an orphaned refugee before she even left her mother's womb. Growing up "Yugoslavian," it was very clear how the maternal elders in my family wanted us to identify ourselves. We are Croats from Herzegovina. Calling yourself "Yugoslavian" meant you were aligning yourself with those that murdered our men and left our women to pick up the pieces. One of my great aunts walked around the rest of her life with a Serb bullet inside her abdomen.

Growing up with a Catholic Croatian mother and Muslim Bulgarian father was seamless in some ways since the two Balkan cultures were similar in language, traditions, music and food. The religious similarities of our family are what we focused on all through the years. Outside our family, however, our religious differences are what people focused on. Funny how that happens. I experienced the rich culture of my Croatian Catholic side- even dancing in a Croatian dance troupe at churches and festivals around Chicagoland. We connected to our Muslim Balkan roots by aligning with Bosnian Muslims of Chicagoland. There were only a handful of Bulgarian Muslims in America; and, Bosnians took us in as their own. We really are the same people. We're family.

In the 1990s, I was a young adult. I recall Bosnian refugees suddenly flooding the mosque. Men with their legs blown off. Women carrying babies. Elders walking in with canes. A new generation of Bosnian Muslims were in town; and, they were trying to learn English and resettle in a new land. They were here in droves under refugee status. They were here because Serb forces waged war against them in their homeland- a mighty military against a civilian population. They were here trying to grapple with PTSD. They were here grieving relatives that were massacred back home. They were here running back to their faith- back to God, trying to make sense of what they just endured and what others back home were still enduring.

I was young and naïve and I didn't get it. I recall taking in the images and the stories. I had already heard these types of stories- years ago - about my own family. But this was stuff that happened in previous decades. Nowadays, we are civilized. Armies don't perpetrate genocide anymore. This is the 1990s! This is not 1945! My brain did a bit of a shut-down. The way that my family pushed aside the travesties of our past was an easier way to deal with the reality of the world. I did join the others in pleading with the U.S. government to make it stop! Make the killing in Bosnia stop already! And they did make it stop. I remember cheering at the TV with my father as the news stations showed images of the U.S. military bombing Serb military installations by order of President Clinton. 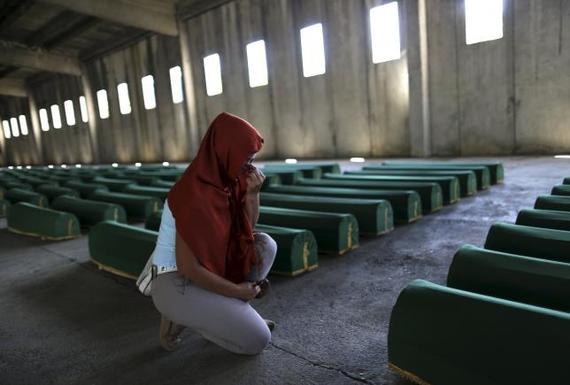 It stopped. But it was too late. 100,000 people had already been killed; 2.2 million people were displaced; and, Srebrenica had already happened. 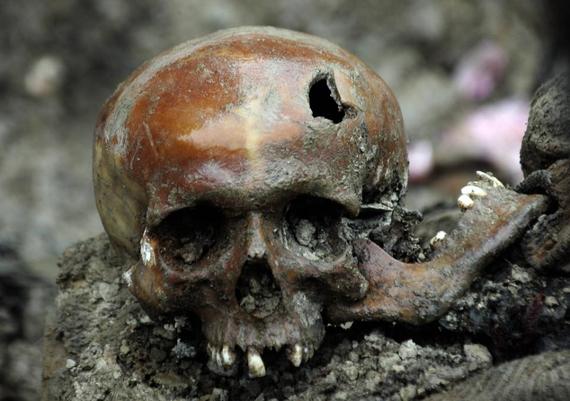 Now that I'm older, the reality of the 1990s war against Bosnians and the massacre at Srebrenica is finally hitting me. And my family history is finally hitting me. Leaving the mosque one night a few years ago, my Bosnian refugee friend pulled up in front of my house to drop me off. Instead, we sat in the car for hours while she told me stories of travesties that took place in Bosnia in the 1990s. Some of the things she told me, I have never repeated. They are so entirely gruesome, cruel and horrific - that I don't have the wherewithal to repeat them. I don't want to harm the memories of the victims by writing about it in detail. But the stories have been told of scores of Muslim women raped by Serb soldiers in front of their family members- babies killed - and men and boys massacred by the thousands. Entire villages were terrorized. They wanted the Bosnian people to "go out of their minds."

This is at the core of the Balkan travesties: religious bigotry.

You don't heal from witnessing mass genocide. You simply don't. The generations of Bosnians abroad and here in the United States are unhealed. They will never heal. They survive. I know. They are my friends.

This week, Russia and the UN officially did not recognize the genocide at Srebrenica as genocide. Mind blown. Who are you, Russia? Who are you, UN? Who are you to decide that genocide is not genocide? Who are you to invoke a Twilight Zone overture over a people that have suffered genocide? It's ridiculous. It's ridiculous we live in a time when people argue over whose genocide was worse. We live in a time when genocides are pimped out for reparations. But is any genocide worse than others? Can you politicize genocide and make it untrue by not acknowledging it?

Angelina Jolie covered the 1990s Bosnian war in a sub-titled movie called, In the Land of Blood and Honey. (See my personal review here. ) She did an amazing job attempting to shine a light and let the world know what happened. The scene about Srebrenica was too short in the film though. It showed mass graves with bulldozers next to them. Then the movie cut to the next scene. That moment in Jolie's movie of a bulldozer represents at least 8,000 men and boys that were massacred. Some dug the graves of others and witnessed them shot into the holes. Some dug their own holes. Others were buried alive en masse, bulldozers covering them with dirt. This is the stuff of barbaric times yet circa 1990s.

If this type of evil happened once; it can happen again. It's like a bitter taste in your mouth even in times of peace. Knowing that human beings are capable of such evil is a stark reality to come to terms with.

Justice is barely being served in this matter. Reportedly 25,000 people took part in the mass genocide. Some of these perpetrators made it to the United States and have been living the high life. They are now being deported; and, it's about time. Key figures (some now dead) brought to the Hague and tried for war crimes and genocide include: Slobodan Milosovic; Zdravko Tolimir; Radko Mladic; Radislav Krstic; Vujadin Popovic; Ljubisa Beara; Milan Gvero; Vidoje Blagojevic; Dragan Jokic; Radovan Karadzic; Ratko Mladic; Jovica Stanisic; Franko Simatovic; and Momcilo Perisic. These people do not deserve for their names to be remembered. The thousands of victims deserve their names to be remembered. But let their names forever be published for the world to never forget the evil that exists and what it is capable of.

It's been 20 years since the genocide of Srebrenica. Never forget Srebrenica. 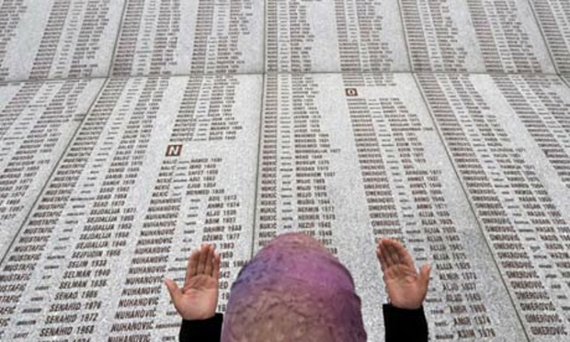