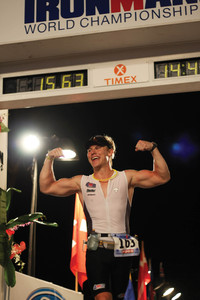 Crossing the finish line of the Hawaii Ironman - October 13, 2007

It was in 1978, when Naval Officer John Collins began playing with the idea of combining the three most challenging endurance races on the island of Hawaii into a single race. Why? To see who the toughest athletes were out of swimmers, bikers, and runners. The person who finished first would be the true "Ironman".

In that same year on February 18, a total of fifteen competitors, including Collins, came to the shores of Waikiki to compete in the first Ironman triathlon event - a 2.4-mile swim, 112-mile bike ride, and 26.2-mile run.

Fast forward 35 years, and you have the world's most difficult single day athletic endurance event.

I grew up watching this incredible sport on television every year, and was always fascinated by the athletes who participated. And as the Ironman celebrated 35 years this week, I reflected back on my very first Ironman in 2007.

I took my first step into the cool blue salt water and it hit me with all the force in the world, I was at the Ironman World Championship in Hawaii. It was going to be an amazing experience, and all the nervous energy that was still lingering around had vanished. I was ready to go.

The professionals were given a fifteen minute head start from the rest of us. There we were, almost 1,750 triathletes thrown into this gigantic stew of people treading about. As I was floating there looking at the sun rising over the large Hawaiian mountains, all I heard was BOOM! The race had begun and the large mass of people instantly turned into a human washing machine. Everyone was scrambling towards safety, but those areas were only inhabited by more people. The only way to stay afloat and not get trampled upon was to swim, and to swim aggressive. I was getting kicked, punched, clawed, scratched, dunked, and pulled back by these people. I tried to let all this chaos stay in front of me, and eventually found a somewhat less busy path to focus my energy.

I swam with a pretty steady group for a majority of the race, and occasionally you would get a daring swimmer that would enter the pack and try to push through everybody. After about an hour of swimming, I was headed back to the seashore and all I kept thinking about was that I still had another 138 miles to go. This was going to be a very long day.

I ran through the transition area, threw on my bike gear and I was out on the course. I waved to my parents on the way out, and that really gave me the boost I needed.

The first few miles of the bike course is within the small town so you get a lot of support from the spectators and locals, which is greatly needed and appreciated. After you leave the town, you're on your own and there is nothing but lava fields out there to keep you company. It's just the road, your water, salt pills, energy bars and your thoughts. You have a lot of time out there to think, and I kept thinking about all that my family and I overcame to get to this point. The more I thought about it, the more I appreciated the race for what it was worth. I knew that my family and friends were back home thinking and praying for me, and that my parents had their fingers crossed for good luck back at the transition area in town. It can be a lonely race if you're not a fast cyclist, so it was extra lonely for me, but I was enjoying the moment.

I was able to have a lot of great conversations out there with myself, and reflect back on the journey that it took to get there. These thoughts gave me the confidence that I needed to break through the pain and just keep moving forward. I'm sure it seemed ridiculous to a lot of people for me wanting to attempt this race with my recent medical background and recovery, but I knew in my heart that it was going to take something as extreme as the Ironman to finally complete the healing process. This event was much more than a race to me, it was a personal declaration that I was fully recovered, and also a way for me to show my appreciation to the people who were a part of my journey back to life - my parents, family, friends, medical team, blood donors, and supporters.

Before I knew it, I was on mile 20 of the marathon and I was almost back to the area where the finish line was set up. My legs were swollen and numb. The most difficult part was putting one foot in front of the other because my legs just weren't cooperating. They felt good at the start of the marathon but I knew something was wrong with my right leg because it kept cramping on me. The salt pills that I took helped the cramps go away a little bit, but they kept coming back. I stayed focused on finishing because I was almost there.

I made it to Alii Drive and was coming down the final stretch. It looked as if the entire town was out on the streets cheering everywhere, and this wasn't even close to where the finish line was.

A few hundred yards away, my parents were expecting me, and I was so excited to see them. I jogged down the last hundred yards and I must have picked up my third or fourth wind because I was giving it all I had left, giving everybody high-five's, putting my arms out to my sides, and then I finally got there and saw my parents waiting for me.

I made it, I had reached the finish line. I walked up slowly to the line, turned around to really take in the moment and look at the crowd, and then I put my arms up in victory and gave my parents the biggest hug that I have ever given them.

It was an incredibly emotional moment for my parents and I because we had gone through so much over the past few years. And in that moment, on that Ironman finish line in the late evening of October 13th, I was fully healed and my recovery was now complete.