I was a 24-year-old reporter in July 1995 living in Sarajevo when the Bosnian Serbs made their move on Srebrenica. I was there when -- a few days after the Srebrenica safe area fell -- a colleague first told me about reports of mass executions.

Even having lived in a war zone and under siege and even having seen innumerable atrocities, I couldn't bring myself to believe that Bosnian Serb forces would execute every Muslim man and boy in their custody. For all of the brutality of a horrific war, this was a singular horror. It was genocide. A fact now proven again and again by international tribunals. When I learned that Russia was planning to veto the UN Security Council resolution commemorating the genocide in Srebrenica, I confess I had a similar reaction. 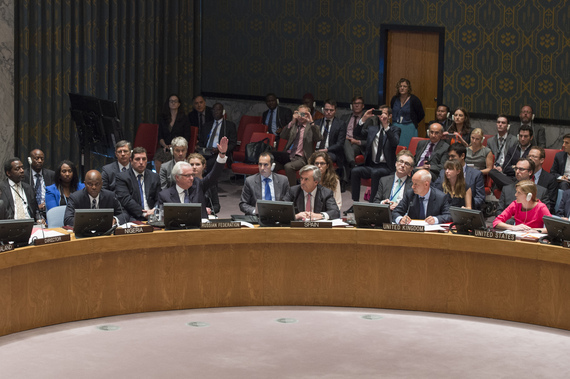 I spent the tenth and the fifteenth anniversaries of the genocide in Srebrenica there, in Srebrenica. In 2005, I met up with my former colleague, journalist David Rohde, who is here with us today. In August 1995, days after the massacres, it was David who discovered a leg protruding from a mass grave site in the woods and fields of Nova Kasaba. Subsequently, he discovered a pile of canes and another piles of eyeglasses. Canes of the old men who had been executed for one reason, because they were Bosnian Muslim. Canes.

In 2005, David and I joined the Bosnian families of those who had been massacred as they walked along the route that many of Srebrenica's Muslim men and boys had taken while fleeing the fallen safe area. The families were tracing their loved ones' journey in reverse. All along the route, although it was ten years since the genocide, we came across the human remains of the victims. Scraps of clothing. Shoes. Discarded IDs. And, even scattered bone fragments protruding from the earth.

In 2010, when I led a U.S. Presidential Delegation to Srebrenica on behalf of President Obama, I retraced just the final leg of that journey again. Interspersed among those on the march were many children of those who had been killed in Srebrenica. Most were teenage girls and young women who had grown up without fathers and brothers. There were far fewer young men than women on the walk -- a chilling result of the fact that so many young boys had been executed. Remains were still being dug up and mourned. One mother I met in Srebrenica was burying the fourth of her five sons at a mass grave site in the center of town. She was still searching for the remains of her fifth. It is that mother's truth and pain that was vetoed by Russian today.

Why should we continue to retrace victims' harrowing journey? Or why, for that matter, do we continue to gather -- whether it's here at the UN, or in Srebrenica -- to mark this day, and to retell these gut-wrenching accounts of the victims?

We revisit so that we can try to learn from our collective failure -- and by ours, I mean the world's, the Security Council's, and particularly those governments, including mine, that had the power to prevent what happened but didn't.

Bosnians believed they would be protected by a UN flag and by the principles it stood for; they took refuge in a place literally called a "safe area." Yet, when Bosnian Serb forces probed the UN's willingness to protect civilians under its watch, the peacekeepers melted away, and the Bosnian Serbs pressed ahead. First they cut off fuel and other essential supplies; then they attacked the peacekeepers' outposts; then they disarmed and humiliated the peacekeepers themselves. Promised NATO airstrikes never materialized.

Now we also commemorate Srebrenica to show our ongoing commitment to hold accountable the perpetrators of these atrocities. The perpetrators of the genocide in Srebrenica killed more than 8,000 Muslim men and boys and raped countless women and girls, in part because they felt confident that they would never be punished. That is why it is so important that all of the indicted masterminds and commanders of the genocide in Srebrenica, most notably Ratko Mladić and Radovan Karadžić, are now facing trial for their crimes in The Hague. This shows that the arm of justice is long, and that abusive regimes -- from the Assad regime that gasses its own people, to the North Korean government that works its people to death in gulags -- will one day have to answer for their atrocities.

Now, as we saw today, some political leaders and groups deny that genocide took place in Srebrenica or fail to wish to recognize it. Bosnian Serb leader Milorad Dodik last month called the genocide, "the biggest sham of the twentieth century." We have heard such statements from Holocaust deniers and even, more recently, from Rwandan genocide deniers. Individuals who use such phrases humiliate themselves and mislead those they claim to represent. Genocide happened in Srebrenica. That is the conclusion reached by both the International Criminal Tribunal for the Former Yugoslavia and the International Court of Justice based on mounds and mounds evidence. The refusal to acknowledge that genocide occurred is not only deeply hurtful to the victims and their families who have already endured so much, but it is the obstacle to reconciliation. Imagine being the mother of those five sons killed in the Srebrenica genocide, and being told that a denial of the genocide will advance reconciliation. It is madness -- a madness motivated by a similar negation of the Bosnian Muslim experience that helped fuel the slaughter at Srebrenica in the first place. So long as the truth is denied, whether here in this council or in the region there can be no meaningful reconciliation. Imagine us, imagine if this were our families, would we reconcile when our experience was being denied? There is no stability in genocide denial. This Council did everything in its power to get Russia on board with this simple resolution that did not even name the perpetrators. But Russia had a red line; the resolution could not reference the genocide in Srebrenica. It could not reference a fact. Twenty years ago the international community failed to protect the people taking refuge in Srebrenica, and the result was genocide. Today, because of Russia's refusal to call what happened in Srebrenica by its rightful name, genocide, the Council is again failing to live up to its responsibility. This is a veto of a well-established fact documented by hundreds of thousands of pages of witness testimony, photographic evidence, and physical forensic evidence of the kind I encountered on my walks.

The Rwandan genocide, like the Srebrenica genocide, is an established fact. Would anybody here dream of arguing that we should not mark the Rwandan genocide -- indeed that we should deny it -- because a group of genocide deniers said it might undermine reconciliation or stability? Does Holocaust denial advance reconciliation, or do we all agree that recognition and remembrance are the key, critical ingredient to moving forward? Everyone here knows the answer to these questions. Yet a number of countries today have chosen to remain "neutral" on genocide recognition by abstaining from supporting this resolution. If the mothers of the boys executed in Srebrenica - boys executed just because they were Bosnian Muslims -- were here today, they would ask how anybody could abstain on their reality.

But far worse, they would ask how could any country use the privilege of permanent membership on this Council to negate entirely what has happened to them. The crime of genocide is the crime that the United Nations Genocide Convention was written and ratified to prevent and punish. The crime of genocide in Srebrenica is what the genocide convention -- which all of us have ratified -- exists to prevent and punish. Reconciliation cannot be built by burying the dark parts of one's history, however unsettling they may be. In the hearings at the ICTY, perpetrators and victims alike testified to how heavy machinery was brought in to dig up the earth to bury victims, even before the executions had occurred. So as the victims -- many of them blindfolded, their hands bound -- were led to their death, they heard not only gunshots and cries, but also the roar of bulldozers, digging the mass graves that would eventually bury them.

I just want to tell one story in closing. Ramiz Nukic nearly ended up in one of those mass graves. As Bosnian Serb forces approached Potocari in July 1995, he said goodbye to his wife and children, and fled into the forest with his father, brother, and thousands of other Bosnian men and boys -- he shared his story recently with a reporter. When the men and boys paused briefly at the top of a hill, tanks and guns opened fire. His father and brother were killed immediately, along with others; Nukic himself managed to escape, eventually finding his way to a refugee camp.

In 1999, Nukic returned to Potocari and found his way back to that hill. He found bloodied clothes and shoes and three skeletons there, but none belonged to his family. Since then, he has spent every single day searching the woods around Srebrenica for victims' remains. What began as a search for his father and brother has become a search for the remains of all victims. He said that a day rarely goes by that he does not find some remains, which he reports to Bosnia's Institute for Missing Persons, which then tests the bones' DNA against a network of survivors.

The identification is important for victims' families, particularly those who have never been able to confirm what happened to their loved ones -- expecting they were killed, but having nothing tangible to prove it. The remains help give them a long-overdue sense of closure. "Thanks to [Nukic] many bones got their names," a staffer at the institute said.

This year, partial remains of Nukic's father were finally found -- though not by him -- in a mass grave. Nukic will bury his father on Saturday in Srebrenica -- one of 136 newly identified victims to be buried alongside the 6,241 victims already interred in a joint cemetery there. He will be joined by thousands of mourners who assemble each year to mark the genocide. On recovering part of his own father, Nukic said, "Although he is not complete. I will bury him, and I will know where his grave is." He said he intends to keep searching for the remains of other victims for as long as he lives.

We too must continue to search relentlessly for the full truth about Srebrenica. The remains of more than 1,000 victims are still out there. They continue to haunt us, and we cannot rest until they are all found. Only by unearthing these truths -- and only by recognizing this genocide, the gravity of this genocide, and how we outside failed to prevent it -- will we be able to help the region move beyond such a dark part of its history, help it walk toward greater reconciliation, which we all seek, and live up to the promise of preventing genocide in our time.