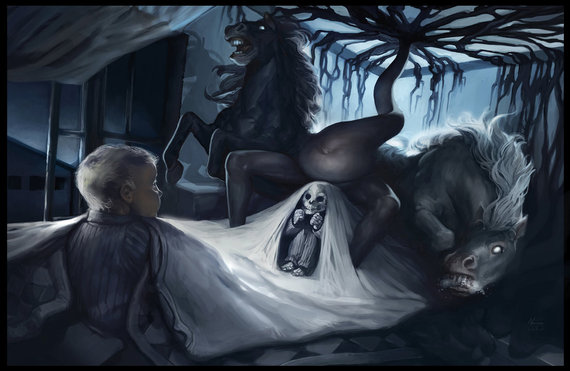 It's a cold night in February 2017. I am making passionate love to Megan Fox, who is so enthralled that in the past two minutes she's barely mentioned my gut and male pattern baldness. Suddenly the television seems to turn on by itself, broadcasting a press conference with President of the United States Marco Rubio and Vice-President Ted Cruz as they address the nation.

Rubio: We are going to replace Obamacare!

Cruz: A plan that will be implemented after we take back our country!

Rubio: By exposing Hillary Clinton. She ate dinner at Wendy's yesterday. She wore bifocals. And a pantsuit!

Reporter: Why is that bad?

Rubio: Everything she does is bad.

Cruz: Bordering on evil. Her thoughts at least are most probably evil.

Reporter: Have you ever been able to prove any of your accusations?

Rubio: Who needs proof? We have theories. They're much better than proof.

Cruz: Except for the theory of evolution. That's not true.

Reporter: You're about to invade Iran. Why?

Rubio: The Clinton Foundation once inoculated all the children in Iran with a polio vaccine. We think they're actually building a super-race of intellectuals.

Rubio: Like President Obama, they blame everything on someone else. People like this can't run a country!

Then I wake up. Despite being an atheist-right-to-choose Democrat, I thank God it was only a dream. Suddenly, I realize Megan Fox is gone too. I blame it on Rubio and Cruz.