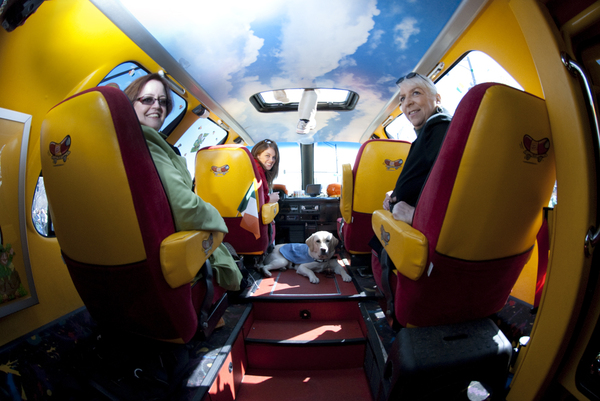 This month Oscar Mayer is celebrating 75 years of the Wienermobile. The first Wienermobile was the brainchild of Oscar's nephew Karl Mayer, and on July 18, 1936, the 13 foot hot dog built by GM started cruising the streets of Chicago and the Midwest. Today's marketing experts consider it one of the most successful marketing gimmicks in history.

When Noelle Overly emailed and invited me to ride "shotbun" in the Oscar Mayer Wienermobile in Chicago's 2009 St. Patrick's Day Parade I was sure it was a prank. I demanded her phone number to make sure she was official. As soon as it was clear she wasn't punking me, I immediately swabbed myself in mustard and emailed all my friends to make them jealous. I filled the letter with all my worst puns: "You know I'm going to relish this!" "Come to the parade and ketchup with me!" I gloated.

Today there are six copies of the 2004 model cruising the nation bringing delight to children and hot dog lovers like this Meathead. The fiberglass 27' hot dog rests on a toasted bun wrapped around a Chevy W4 Series chassis powered by a 300 Vortec 5700 V8 engine with a 4 speed tranny and anti-lock brakes. It is equipped with a bitchin' sound system and wireless microphone and external speakers. There's a hot dog shaped instrument panel with voice activated GPS, an exterior rear view camera, a "bun roof", gull wing door with retractable steps, and a horn that toots the Oscar Mayer Wiener Jingle.

The interior is plush, carpeted, with comfy mustard and ketchup colored captain's chairs for six, and a blue-sky ceiling dappled with clouds. Surprisingly, there is no fridge or grill on board. In 2008 the company also launched a mini Wienermobile that are only 15' long built on a Mini Cooper chassis. 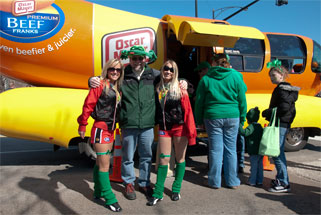 As we waited for our turn to roll out, the iconic vehicle was surrounded by laughing kids and parents posing in front of the giant orange sandwich. Even the Miller Light girls checked us out and posed with the public (right).

The large Wienermobiles are staffed by two "hotdoggers" hired right out of college for the world's best first job, motoring across the country collecting waves and smiles. Driving on this bright clear sunshiney 40-something Saturday, March 14, 2009, was 22 year old Molly Fergus of nearby Des Plaines, IL, a recent journalism graduate of the University of Missouri, of Irish descent, from County Mayo no less. Her partner was Amanda Maurer, 23, of Yorktown, PA, and a marketing grad from James Madison. 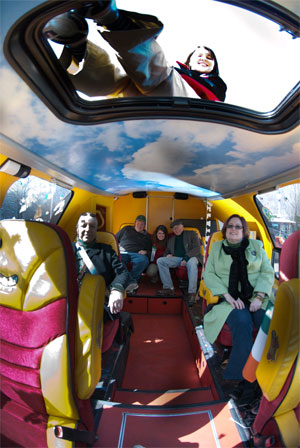 Along for the ride were Molly's Mom Peggy, Dad Brian, and Brother, my friend and guest, Mary Ann Brauneis, the now retired owner of a landmark Southside Chicago hot dog pushcart, and Sunshine, an eight month old Yellow Lab my wife and I were raising for Leader Dogs for the Blind. In the picture, that's Mary Ann on the left, Molly's brother, Molly, her Dad, Mom, and in the bun roof, "Hamanda". Sunshine has since graduated from Leader Dog School in Rochester, MI, and is dragging a blind man around Madrid, Spain. Click here to see a photostory of a day in the life of Sunshine when she was training at age 3 months.

As we headed down Columbus Avenue through Grant Park behind the Art Institute, Amanda scrambled up on the roof with her microphone and led the crowds in singing the jingle and chanting. "I say Oscar and you say Mayer" she exhorts" and the five-deep crowd dressed in green responds every time. "Who likes mustard?" she asks, and they cheer loudly. "Who likes ketchup?" and they boo louder. Then she sings, and the crowd joins in:

The girls clearly love their job because after months behind the wheel, Molly still smiles broadly and sings the jingle without the loudspeaker, even when nobody is watching. College students can apply for the job on their website and anyone can follow their blog there. Sadly, they do not publish their schedule on the web because it brings out the PETA crazies. You know, the ones who protested when President Obama killed a fly.

How did I wangle the invite? I think it had something to do with the fact that I gave their formulation of the all-beef "Premium" Frank a good score in my blind tasting of 30 franks (the other styles they make did not fare so well). Click here to see my all-beef frankfurter blind tasting results.

Now that I've been in the St. Pat's Parade, and I've ridden in the Wienermobile, I'm thinking my life is complete. What could be cooler for a guy nicknamed Meathead? I must have been quite a sight with my head sticking out the bunroof grinning ear to ear. Have you ever sausage thing?

With all the variations of hot dog available, none of them perfectly satisfy me, although the Chicago Dog comes close. So here's my ideal hot dog:

1 fresh baked bun long enough to hold it all. This may be the trickiest part. For my ultimate dog I do not use the flimsy hot dog bun. I look for a fresh baked oblong bun about 7" long and 3" high. I want a soft center that will make a pocket for the dog and all the ingredients. I also want a crunchy crust but nothing so tough as a baguette. A hard crust will cause the dog to squirt out the end and onto the lap of the person across from you. Slice it open and toast it on the grill.

1 bun length jumbo hot dog. A Sabrett. But they're hard to find outside NY and NJ, so try Hebrew National or the Oscar Mayer XXL Premium Beef Frank. It's not a bland kid's dog and it's big enough to fill the bun. Most of the other dogs in my grocery are too small. And don't turn your nose up at Oscar Meyer. The Premium is for adults. The others are for kids. Cut an X in the ends and cook on a grill until there are char marks but don't allow the casing to burn or blister. Place in the bun.

1 long thick squirt Dijon-style mustard. Peanut butter and jelly. Steak and potatoes. Hot dogs and mustard. The combo is unbeatable. I prefer brown, spicy Dijon style mustard's depth and complexity to ballpark yellow mustard for this recipe. Better still, try my Grownup Mustard Sauce. Lay down the mustard on one side of the top of the frank so it will act like glue to hold down the raw onions.

2 tablespoons chopped fresh onions. Chop enough onion just before using it or it can get stinky. Vidalia or Walla Walla onions are sweet, juicy, and less biting than other onions. Spread them between the frank and bun on one side only.

1/2 onion, caramelized and flavored. I love Sabrett's Onion Sauce, but frankly (ahem) I prefer caramelized onions for this recipe. Slice the remaining onion and slowly cook it in a nonstick pan with 2 pats of butter until brown throughout. When it is brown, add a splash of balsamic vinegar and a pinch of hot chipotle powder. Spread them along the other side of the frank.

1 tablespoon Japanese pickled ginger, chopped. This is the stuff you get in Japanese restaurants to garnish sushi and sashimi. You can buy it in jars in a lot of groceries nowadays. Sprinkle on top of the mustard.

Celery salt. Required in Chicago. Sprinkle lightly over the ginger.

Ketchup. And ruin it? No way! Click here to read what the experts say about ketchup on a hot dog.

How do you make your favorite dog?

More:
grillingeatingculinaryDinnerGrill
Newsletter Sign Up
An essential daily guide to achieving the good life
Subscribe to our lifestyle email.
Successfully Subscribed!
Realness delivered to your inbox