For the last 20 years I have gone to the same hair stylist in New York City. He is a calm, quiet, tranquil man of few words. His process is meticulous and time-consuming. He looks at my dry curls. I am washed twice, conditioned and returned to his chair for an hour of precision cutting. My coiled, frizzy hair is dried and then flat-ironed piece by piece so it hangs pin straight. Only then does he begin his dry cut. One section at a time and when he gets to the front one hair at a time. It's tiring sitting under the lights with little conversation as he stealthy moves behind me. Every few minutes I catch a glimpse of him peripherally. When he is fully satisfied that my coif is perfectly angled, I am free. Perfect cut it is, but as mentioned, pin straight. Such is not a look that is the look for me. So, up in a ponytail it goes and out the door I go.

I haven't lived in New York for a decade but that has had no effect on my hair. 4-5 times a year I take the train to New York for my cut. Just because I chose Philadelphia for my family, why should my locks loose their whisperer?

Until my 30s I was pretty happy with my hair. Other than wishing every day that it was straight. Still, my curls were nice, I had a lot of them and it wasn't their fault I decided to cut bangs. Or a bob. Humidity is not my friend, rain is my enemy and going from blowout to chia pet in less than 60 seconds is a cool party trick. Straight it wasn't, but a good curly it was.

And then I had a son. And then a daughter. And then my marriage took a slow, winding, treacherous ride down a long dark road. And then, then I picked myself up and put myself back together again. And then I was ok.

This week at the end of my cut, my hair stylist took off my cape, took a long look at me in the mirror and left me with, "Your hair is better, it is finally better. Turn around and look, it's finally better."

Holy crap. All along, my hair held my story, my hairdresser the reader.

All along he would hand me complimentary bottles of special serums and treatments from his frequent trips back to his native Japan. Serums and treatments without English so what was in them and what they were claiming to do I hadn't a clue. He could tell when my body was brimming with joy, with baby and when he knew when I had lost hope and stopped fighting a fight. He could tell when I picked myself back up and began to come back to life.

He saw me grow back into myself inch by inch. He patiently waited and every few months cut off the dead and sent me on my way. He knew when I tried to hide the physical manifestation of my crumbling life with a band-aid. A curly haired girl thinking an express keratin treatment is the answer to hide her half-full head of hair.

My hair still frizzes the moment it senses moisture and sadly ¼ of my curls decided they want to be waves. Some curls want to curl and then hang straight on the end. Unless I am on a beach, fresh outta the salt water, air-drying is not an option and I spend most days in a bun.

But my hair is finally better, it's all grown back. Different than it was before but healthy and strong.

For the first time in 20 years when I walked out of Eiji Salon and onto Madison Avenue I kept my pin straight hair down. And it looked great. 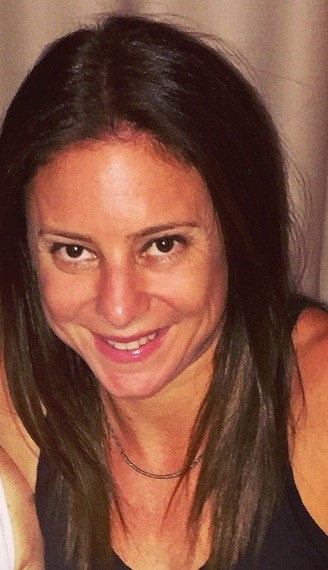