During the last twenty days of September, I attended twenty Seattle area theater productions. I didn't go to one each day, but some days I'd attend a matinee and then an evening show. It was a wonderful whirlwind that continues in October.

Here are a few of what I consider to be highlights that are still playing:

1. American Idiot at ArtsWest. An energetic 95 minutes of sheer energy and inspiration presented in two different ways - Observational and Immersion. Worth seeing twice. I did.

2. Bloomsday at ACT. Moving and insightful. Caused me to consider being more in the present without regrets.

4. Snapshots at Village Theatre (show moving to Everett soon). Another thought provoking performance with songs that are familiar.

5. Book-It Theatre's What We Talk About When We Talk About Love. Raymond Carver at his best performed by a first rate cast in an intimate venue. Love and relationship explored. Bring your sweetie.

6. Oliver! at Tacoma Musical Playhouse. Well worth the trip to Tacoma to see this gem of a musical. 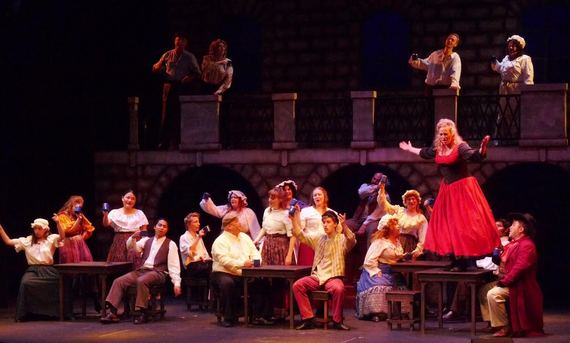 7. Seattle Rep's A View From the Bridge. Classic Arthur Miller presented in one of Seattle's best venues. Thought provoking and entertaining.

There were, in fact, many more highlights, but most of those shows have closed. October will be another such month with Taproot's Dracula, Teatro ZinZanni's new show Hollywood Nights and Waterfall at The 5th Avenue among others.

There really is a lot of amazing talent performing in the Seattle area every evening.

Arts Arthur Miller Oliver Act A View From The Bridge