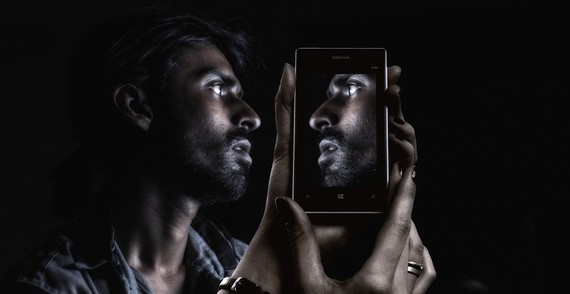 Are we living in a postmodern screen dream?

Has this ever happened to you: you accidentally leave your cell phone at home, and it feels like your soul has stayed there with it? Your nerves crackle, you feel short of breath - in short, you panic. The specific reaction to a forgotten device depends on the individual, but in the end it's basically separation anxiety: you find yourself far from something that's really important to you.

In today's technology-driven reality, we are seeing the emergence of this new symptom - what I call "anxiety of the disconnected". It may sound trite, but the phenomenon is real enough to have been studied.

The Gabinete de Comunicación Estratégica in Mexico confirmed in a 2016 study that 25% of the country's population has felt sad or anxious upon not receiving a "like" on their Facebook status, or when they lose internet connection.

In the United States, psychological studies on the relationship between internet connectivity and anxiety have shown that additional symptoms include headache, disturbances in sleep and strained vision.

Teachers see it all the time. Just recently, at the Instituto Michoacano de Ciencias de la Educación, the teachers' college where I work, one of my students started yelling, "S**t! S**t!", surprising his peers with his profane outburst. "I forgot my ..." He rifled through his backpack, taking out books, papers, emptying out everything. But to no avail: the smartphone wasn't there. I could see the anxiety on his face, as if he'd lost a piece of himself.

What is the source of the anxious feeling? Is it really related to the forgotten object? A postmodern analysis suggests otherwise.

Here's a quick refresher on postmodernism as a concept. According to French philosopher Jean-François Lyotard, the postmodern world can be understand as a modern life distinguished by the losses of the "big references": myth, religion and philosophy. This represents a void experience, which we try to fill through consumerism.

That's when the disconnection happens, because buying doesn't satisfy us. But in fact the disconnection has already happened anyway: we are born disconnected, lost in the virtual reality that is our lives. Or at least that's what many people feel, including children, who now engage in less social play due to digital attachments.

For the postmodernist, then, the real cause of anxiety upon forgetting a cell phone is not the disconnection from the digital world per se, because it has never filled the void left by the loss of big references. Rather, it's that the subject is suddenly left undefended against the terrible reality of confrontation with others.

Without a screen that lets me disappear into the realm of the imaginary, I must confront the other, face to face - necessitating conversation, discussion, perhaps sometimes even a fight.

Adding friends and erasing them

Polish sociologist Zygmun Bauman has said, "what social networks create is a substitute ... you can add friends or erase them, control the people with whom you interact."

It's true - in real life, how do you erase someone? How can you block them, or unfriend them?

You can't. That's why people increasingly prefer social networks and the life they facilitate. And if there's no virtual contact or connection, the normal psychological response is to feel anxiety, of course - not due to our distance from the virtual world, however, but because when we are disconnected, we cease to be the subjects of our own reality and are subjected to reality itself.

But even when we in tune with our digital social networks, we know from the testimony of psychoanalysis patients that over-reliance on technological relationships can dangerously shrink our worlds. Loneliness becomes desolation, connectivity becomes mechanicity; the subject, neglected, contracts, a condition that can increase the risk of suicide.

Even if we enjoy the richness of excellent digital connectivity, it comes at the cost of poor social relations. These are, in the end, a critical part of human existence.

So based on the psychoanalytical literature and philosophical truth, we know that the anxiety of the disconnected isn't because one feels separated from humanity. No, the anxiety comes from the opposite direction: from feeling too close to humanity, too near to the other.

If the subject is disconnected, they have no choice but to face their spouse, their children, their father, whomever else. It is a hard thing to confront one another using words, to dialogue, make agreements, find peace.

Conflict management on Facebook differs from that required in real life, as numerous studies have shown.

That anxiety you feel when you realise you've left behind your smart phone? It isn't about the object you forgot so much as what it represents: a social function that you must now perform in person.

No screen to sink into, like Narcissus drowning in his own image. No, the smartphone-less subject must engage, reposition themselves vis-a-vis the other - a real, living, breathing human being that dreams, desires and conspires, and whom she cannot erase nor often even choose.

And that, indeed, is an anxiety-producing fact.