I think it is safe to say that as parents, we are constantly criticizing our own parenting and hoping that our children do not end up on a therapist's couch talking about how their parents scarred them for life. Or maybe that's just me...

As someone who is a bit temperamental and known for her flair for the dramatic, I try really hard to reel myself in on the parenting front, so imagine my shock when, two days before Christmas, my 3-year-old son called me the Hulk.

As with most parenting questions that stomp me, I turned to Facebook for an answer. Hey, don't judge me. I know you've shared a parenting tale or two (or in my case, 50) on social media.

"I feel a certain type of way about the fact that whenever we watch an Avengers movie, Sesame says I'm the Hulk. I'm not that bad when I'm angry."

There were various responses, including my mom agreeing that I'm mean, but two stuck out the most because they found hidden gems in him seeing me as the Hulk.

The first friend said, "Maybe a good thing for a kid to see the power of a woman's rage, and learn that women are allowed that emotion, too. He knows you're a complex being, and obviously adores you and knows you have your soft side."

The second friend said, "Hulk is also a PhD. There are some parallels. Dr. Banner said he's always angry to control Hulk. My overanalysis is summed up by James Baldwin: To be black and conscious in America is to be in a constant state of rage."

When I read the first comment, the feminist in me was certainly pleased that my son did not simply assign me Black Widow because she's a girl and so is Mommy. As parents, we actively work towards making sure he understands that societal gender norms are not the be-all, end-all. After laughing at friend #2's insistence that my preschooler is a genius, I stopped to really consider the possibility that my son actually understands that his mommy is both a diligent graduate student and an emotional activist.

I was so caught up in my sadness about him seeing me as angry that I did not think of the bigger picture. Sure, I do not yell at him often, but he does see me yell at the television. He's seen me break down in a rage over the media's portrayal of #BlackLivesMatter and police brutality. He's seen me weeping while listening to the mothers of Trayvon Martin, Jordan Davis, Tamir Rice, and Michael Brown. I know he's overheard me discussing gun control and mass shootings with my husband because he's asked me about it later.

He also sees me surrounded by books and hovered over my laptop with my brow furrowed as I try to find my place in the academic sphere. Maybe he was actually listening during that trip to the university library to help me pick up books for the literature review section of my dissertation prospectus. Is it possible that he remembers sitting in my lap as I feverishly typed my take-home comprehensive exam a few days after his first birthday? I wonder if he remembers the nights I read him bell hooks' Teaching to Transgress while he kicked in my belly?

Or maybe he just simply saw Iron Man and the Hulk hanging out more in Age of Ultron and decided that's the two of us? 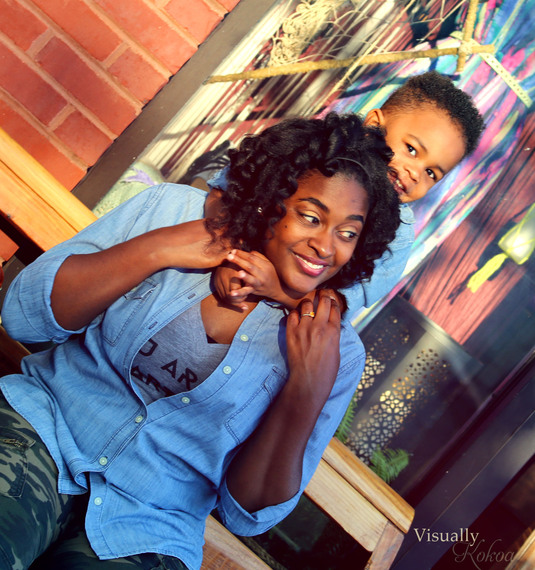 More importantly, I'm OK with my son knowing that Mommy has emotions and they are not always the happy kind. Hopefully, Baby Baldwin, as he's been dubbed by friend #2, sees messy emotions in the same way he sees our messy living room -- a place that we clean up after we've let it all out.

So, yea my son called me the Hulk the other day, and I'm OK with it.