The recent arctic cold snap that brought frigid temperatures and the season's first snow to Denver reminded me of a fact I simply cannot deny: my son is, and has long been, a loser. This simple teenage truth became comically clear about this time last year and remains true to this day. The mystery also remains, "Why can't my son keep track of his things?"

The most recent round of this longtime phenomenon took place beginning a year ago with the anticipation of ski season. I got my son his season pass and bought him a handsome new ski jacket, plaid like the snowboarders wear, a good brand, on a slight sale. When the weather turned cold a few days later, it made sense for him to wear the jacket to school; it never came home. When questioned, he remembered taking it off in a stairwell at his large, urban high school. "Must've left it there..." We never saw that handsome new ski jacket again. (And I wonder what my son could've done if he did see another student wearing it in the hallway.)

To teach him a lesson, our son had to buy his own new jacket. He found another plaid one for cheap at a used clothing store. Not a good brand and not really so much made for snow sports as for fashion, he would pay the natural consequences of this inferior garment once he hit the slopes. The only problem with that lesson was that this new (used) jacket went missing before we ever went up skiing.

To teach him yet another lesson, our son was forced to wear his old ski jacket from the previous seasons after the other two coats went missing. The sleeves were short on him, an affront to his sense of fashion. He took this in stride, yet this jacket, to which his season ski pass was attached, also did not come home from school soon after.

By now you must be wondering how I could contain myself and not go off on my son for losing a total of three ski jackets. Parenting pundits might suggest we punish him by taking money or preventing him from skiing. Instead we took the suggestions of Slow Parenting Teens and rolled with these events. Rather than strain our relationship with our teenager, and also sacrifice an otherwise good ski season, I offered my son my old, black, REI puffy jacket - fiber-filled, not down -- which was too big and not the least bit attractive on him.

The ski season came and went, and with it our memories of those missing jackets. (A trip to his school Lost and Found did eventually turn up the third one -- arms now way too short, the ski pass long since replaced.) And the seasons passed again until this recent cold snap when out came the ugly, black puffy that now fit slightly better as our son continues to grow like teens do.

Yet as the seasons change, some things stay the same. Today is a snowy Denver day, and my son cannot seem to find that consolation puffy, last seen in the high school theater as part of his costume for the fall play. "I'll look for it..." he assures us. I asked that he also look for the old soft-shell jacket I loaned him to wear under his vintage black leather jacket a few weeks ago. When that old favorite of mine went missing, we agreed he'd pay me for part of the replacement. As he layered up today with shirts and a sweater, I noticed that after our discussion he chose to leave his treasured leather coat at home, perhaps acknowledging the odds it would otherwise go the way of so many jackets before it.

Life brings loss, and I've known plenty of it. My mother when I was seven, my only sister when I was eleven, my dad just 21 months ago. In the great scope of things, losing these jackets is no big deal. My son is really just playing to type, doing as his peers and what is age-appropriate, losing things and learning from it, albeit slowly. Sure, I could press the matter more, make him pay more cash, or somehow more dearly, but I am not convinced it would help my son change his ways. And I am fairly certain that stern words and harsh consequences would only serve to strain our relationship at a time when what we need most is open communication and whatever trust we can build and maintain.

So what? My son is a loser. So am I. No, I don't misplace anywhere near what he does. Indeed, I have a talent for remembering where I last saw things, and I pride myself on how seldom stuff actually goes missing, and on my ability to recall and locate items that do.

However, to be perfectly fair and honest, those pesky little Bluetooth headsets that I stridently wear in service to cellphone safety while driving go missing so frequently that my e-bay account knows exactly what brand I am seeking when I log on to order another one. Yes, I am a loser too. My son loses coats, I lose headsets. Like father, like son, and that's why I give him a break.

(Epilogue: Ask me about his recent "stolen" iPhone and the keys I lost last week.) 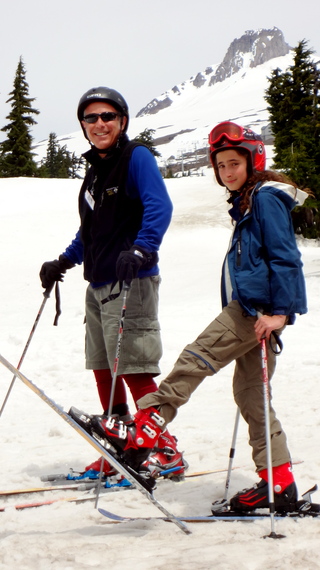 From a few years ago, when we barely needed a ski jacket!

More:
raising teenagersParentsfatherhoodteenagersfather son relationships
Newsletter Sign Up
Raise the kind of person you'd like to know
Subscribe to our parenting newsletter.
Successfully Subscribed!
Realness delivered to your inbox

Educator, author, and activist in the pro-feminist men’s space, my Full-Circle Fatherhood blog reflects on being both a father and son.