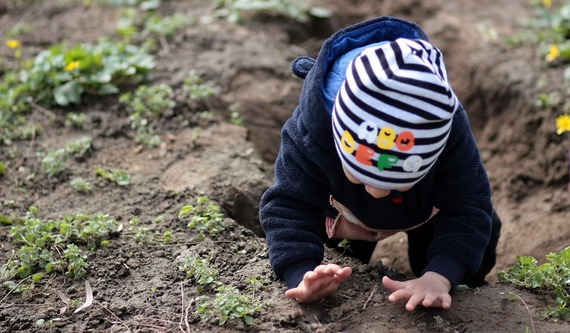 Because we were mostly raised by a single mother, my brother was often instructed by well-meaning friends and family to "be the man of the house" and "take good care of mom." While he is now one of the most kind and thoughtful men I know, he also sometimes gives too much. I know as a child and young man he lived with a terrible sense of helplessness from being unable to make things better while friends and family suggested that he had some sense of responsibility to do so.

So, when I became a single parent and noticed people imposing these sentiments on my son (who was not even two years old!), I made the decision to speak up. "Take care of mom" and "you're the man of the house" are unwelcome directives in our world. My son is not the man of the house; he's a little boy! It's not his job to take care of mom; its mom's job to take care of mom. I say let him be little! The time will come for him to grow up, and it's not now. I won't even get into how sexist these comments are -- that's a whole other article!

I work hard to shield my son from the stressful aspects of my day-to-day life while also instilling a sense of responsibility and awareness in him. I want him to know that money is earned and that life requires integrity, effort and commitment. I also want him to have a carefree childhood; one where he spends hours learning about the caterpillars in our tiny garden without a moment of concern about anything else.

There's a balance, though, between providing too much shelter and instilling in him a sense of awareness for others. I think all parents walk that line every day. I don't want to raise my child to feel entitled or to be oblivious to the needs and feelings of others. I'm honest with him when I have a rough day. He sees me cry. He knows that being a one-woman show is not always a cake-walk--but he also knows absolutely none of that is his responsibility.

I believe that the best we can do in relationships is to take good care of ourselves and allow others the space to care for themselves, while supporting and loving them. I want my son to one day be able to choose a partner who is neither a taker nor a caretaker.

My boy knows to clear the table after dinner, to clean up his toys before bed and to put dirty clothes into the laundry basket. He knows that I will always listen to his stories, but that sometimes he has to wait five minutes until I finish what I'm doing. He has his moments of four-year-old crazy, but overall he is a kind and compassionate boy. So far I see no evidence of him worrying about me or our life, and I will do everything in my power to keep it that way.

I recently got hit really hard with a painful bug. Unable to do very little for a few days, I did my best to care for my son while making sure he knew that my health was the priority. I watched as he played independently, and then eventually brought his Transformers one by one to where I lay on the couch so we could play together. After a while he wandered away, returning with a cup of cold tea for me in his Star Wars cup. Then he was off to play again. It was a beautiful moment. He had been caring and kind, and also respectful of my need to rest. He didn't feel the need to make everything ok, but he was compassionate enough to think of bringing me some tea.

Parenting is so complex and so ever-changing. I'm sure I make so many mistakes just trying to keep up. We all do the best we can and hope that our kids come out relatively unscathed. My hope is that my son will always see his mother as someone who is human and fallible, but also capable of handling the speed bumps of life. So, from one single mom to the world: enough with this "Man of the House" stuff! Let our boys be little! We've got this.

More:
sonsgender rolesParenting divorcesingle moms
Newsletter Sign Up
A weekly guide to improving all of the relationships in your life
Subscribe to HuffPost’s relationships email
Successfully Subscribed!
Realness delivered to your inbox