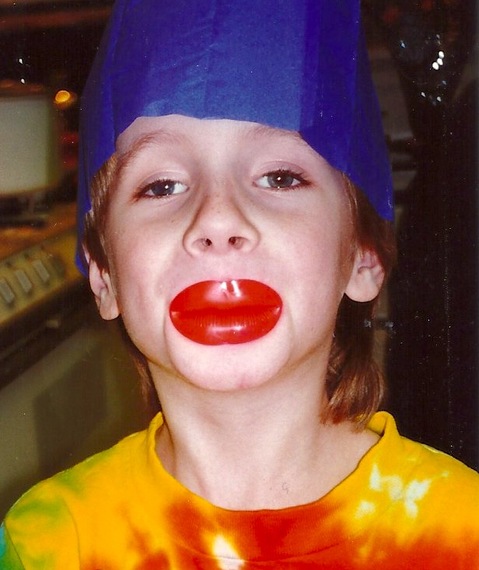 On a sub-zero February morning in 1997, I stopped at my son Harry's bedroom door. I wanted to see if he was dressed for the day ahead in first grade. He was sitting on the floor in front of an open drawer, putting his left foot into an orange sock. A complementary lime green sock covered his right foot.

"Girls have a real advantage," he said, looking up at me.

"They can wear whatever colors they want and play sports."

An ache moved across my chest. "Yeah, you're right. It's not fair."

At six years old, Harry was keenly aware of the chasm between school clothes for boys and those for girls. He would have gladly worn the pink chambray skirt from his dress-up box over his purple sweat pants. But I'd made the distinction that his girls' clothes were only for play. I felt guilty talking about what was fair and what wasn't.

I shifted mental gears to appreciate tie-dye. I thanked Gap Kids for solid-colored sweat pants. And I appreciated my cousin Kat for wowing Harry at Christmas with a gray sweatshirt she'd decorated with glittery fabric glue teddy bears and reflective confetti.

I followed brightly clad Harry down the stairs; happy he'd been able to choose clothes from a drawer full of colors. Eight months earlier his dad and I had considered a private school with a dress code. Conservative styles aside, the only colors allowed for boys were navy, dark green, yellow, white and khaki.

We knew that would never fly with Harry. To him, sameness was boring. But I'd floated the idea anyway.

"At one of the schools your dad and I visited kids can only wear only certain colors," I told him.

"Well, not exactly. You can mix the colors you wear, but only a few colors. Just navy blue, dark green, tan, yellow and white."

Harry's mouth fell open and his eyebrows crinkled toward each other. I might just as well have said all Barbie dolls were being recalled.

"We know," I said, biting my lower lip for having described such a fashion prison.

While I made Harry toast and cocoa that winter morning before school, I told him about Liberace and the clothes covered with rhinestones, sequin jackets and pink-feathered capes. I described Elvis Presley's gold lamé suit with diamond-encrusted lapels and the white jump suit decorated with metal studs and big red and black stones. And I talked about the braided blazer, fringed coat and silk scarves worn by Jimi Hendrix.

I wanted him to know that the fashion door would open for him; that as boys got older they gained the freedom to wear whatever they wanted. I needed him to know there were men who had defied the notion of sameness and boredom with what they wore.

Harry hung on every word. I knew he was imagining what it would feel like to be dressed so glamorously out in the world.

This cold, snowy February of 2014, Harry is 23 years old. The last time we met for dinner in Brooklyn he wore his black faux fur coat, lemon yellow fox scarf, some printed leggings and Army-issue Desert Storm boots. If he's performing as Amber Alert, best bet is she'll be in a shimmery silhouette of sequins, beads or feathers. And sports or no sports, she'll be taking full advantage of all the glitz and glam that fashion has to offer.