Every morning my four-year-old daughter, Sydney, drags a chair into her closet and plucks a dress off of the rack. I try to lean her in other directions --"Why don't we try shorts today?"--but Sydney's stubborn. And I think she deserves the freedom to choose what she wants to wear.

My son, Asher, is 2. I grab shorts and a T-shirt out of the drawer and dress him, because he still has trouble dressing himself. But he figured out how to undress himself -- and pretty often that means he's ripping off his clothing and screaming "dress" over and over again. He climbs onto the chair in the closet and tugs at one of Sydney's dresses --"This one."

So most days my son is dressed like Sofia the First, or some Disney princess, or -- my favorite -- rocking a multi-colored Ralph Lauren spaghetti strap sundress. Taking all social mores out of it, he looks good in dresses. And on an 80 degree summer day in LA, it's probably the most practical choice. 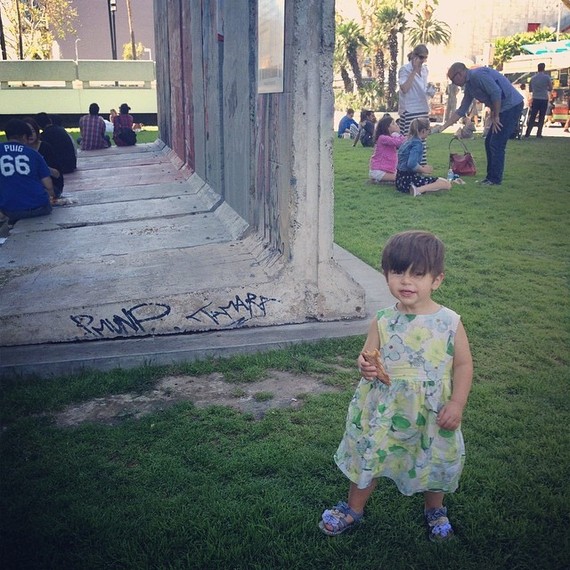 It used to embarrass me slightly when he wore a dress in public. And it wasn't because I cared about people who thought it was weird that my son was wearing a dress. It was because I cared that they thought I had chosen to put him in a dress. As if there was an agenda on my part to use my son as a way to break societal norms, or as my friend's mom said to me -- a religious Sephardic Jew -- "You wanted another daughter?"

This was at a birthday party for my friend's daughter and before I left my house I had tried to convince Asher to change into "boy clothes." I knew that if he showed up in a dress, it would be an endless series of questions and judgments, and I just didn't feel like dealing with it.

But Asher was stronger than ever that morning. He had a huge tantrum as I tried to force his legs into a pair of shorts. His nose was running into his mouth as he cried and protested and I suddenly realized I was fighting for something I didn't even believe in. I was making my kid feel badly for something he shouldn't be ashamed of. And I stopped. And I gave him a hug and I apologized. And then I put back on the purple princess dress with his sister's sparkly Tom's shoes. 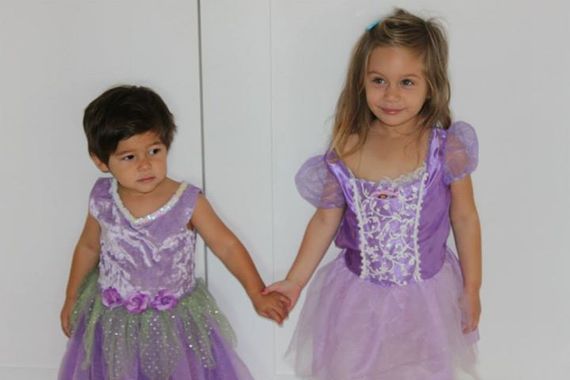 We went to the party, and, as I figured, some of the Israelis laughed and made comments. One said to me, "Do you think this is funny? There are kids here. You want them to see this?" Another said, "You want him to be gay?"

And I stayed calm. And I explained to them the best I could that there is no correlation between kids cross-dressing and being gay. And if he is gay, it's not because of anything I did. It's because he's gay. And maybe it's a stage. And maybe it's not. But either way, I don't want him to ever feel like he wasn't able to express himself because his parents didn't support him. And some understood. And some, trapped by religion or ignorance, gave us the stank face.

Plenty of people are supportive. They'll see my kids -- Sydney with her long dirty blonde hair, and Asher with his short dark hair, and say, "I love your daughter's pixie cut." When I tell them he's my son, they smile and say, "I love it." They also apologize for confusing his gender, but I tell them, "Don't apologize. He's in a purple dress with sparkly shoes. How would you know?" I know there are parents who get worked up when you confuse their kids' gender -- but I'm not one of them. 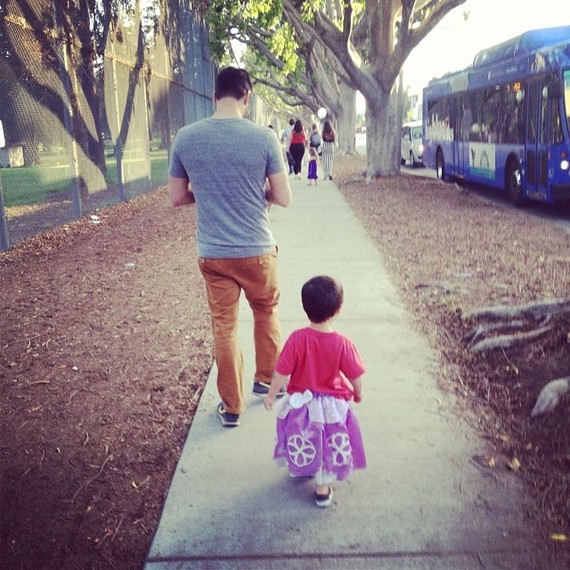 A gay friend saw me with the kids at Jazz at LACMA on Friday night, and apropos of nothing said, "Just so you know I didn't wear any dresses when I was younger," which is essentially saying, "Don't worry. Your kid's not gay like me." This openly gay, married man was trying to make me feel better about a problem that didn't exist. If my son is gay, so be it. Maybe he is. Maybe he's not. Maybe he'll be a cross dresser. Maybe not. I have no control over any of it. All I can do is be supportive.

The saddest thing about the exchange was learning how my friend felt about being gay. As if it were a curse -- and not the awesome, endless dude party it really is. Then again, he's married now. He probably forgot.

I get home before my wife most nights, so I was taking the kids out to walk our dog. They were dressing up in different outfits -- my daughter treating Asher like her doll, as she tried various dresses, shoes, and headbands on him. And then Sydney told me she wanted me to wear a dress, too -- "Oh my god, it will be so funny."

I said, "No." But she kept begging. I said, "People will laugh at me." She said, "If they do, I'll tell them to go away." And I couldn't argue with that, as I squeezed myself into Carrie's most flexible dress. We walked the dog on our block, and the pleasure my kids took in seeing their dad go out of his comfort zone, trumped the humiliation I felt.

Carrie pulled up to the house, and I saw her slack-jawed from the end of the street. She laughed. She took a picture. And she told me I better not rip her dress. And then we all went for a pizza. 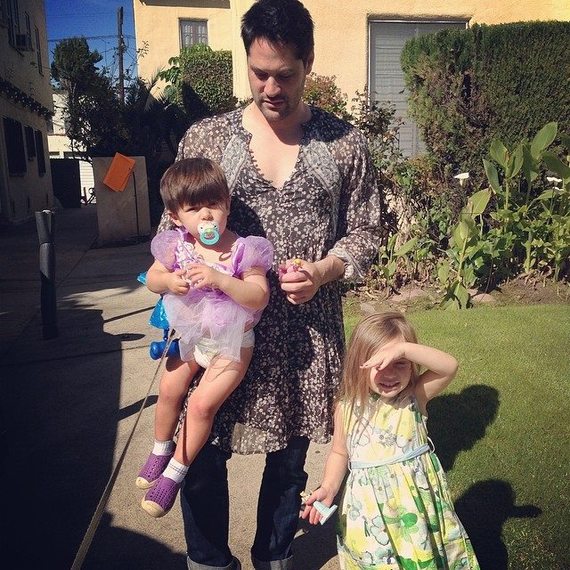 This essay also appeared on xoJane.