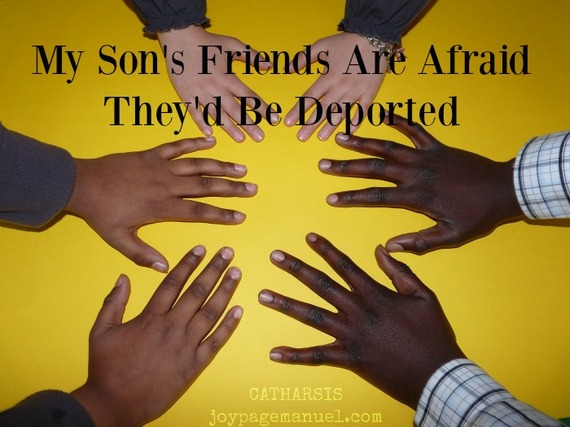 He said it happened during Social Studies. They were discussing concepts such as democracy and voting when one of his female classmates said,

"If _____ (supply presidential candidate's name) wins, 'Ahmed' (another classmate and not the boy's real name) and I would have to move out."

This was spoken by one of my son's third-grade classmates as she spoke about her and another classmate who's also Muslim. I could console myself by saying that it's still fortunate that these two children are not discriminated upon by the other children in their class, but it makes it no less painful that these two feel this way because of the type of discourse our current politics has brought out.

My heart sank. I felt it to be completely unjust for a nine-year-old to even feel that one person can hold that much power to drive them out of what they consider home; that their lives can drastically change all because of people's ignorance. I felt sick to my stomach at the thought of these young children getting exposed to sentiments of hate and blatant racism, feeling singled out not because of anything they have done wrong but simply for being who they are and practicing a culture they were born into.

I felt angry that these children have to be robbed of their innocence -- the belief that differences are okay, religion shouldn't divide us, and that skin color is not what defines any of us.

I will never understand why those particular political candidates are peddling such beliefs to the masses, or the reasons why anyone in their right mind would even support that sort of candidate. For me, nothing can ever justify my choice to support a bigot. I don't care how educated, wealthy or popular you are, if you're a bigot I cannot support you. It's a line I choose to clearly draw and recognize, among others.

I find it both hilarious and frustrating that a common response to the question of why someone chooses to support such a candidate is this: "He speaks his mind and he's straightforward!" Here's the thing. I think it's fun to get drunk with someone who speaks his mind. There's still a high probability that I would consider you an ass but at least I might consider you entertaining. However, an entertaining ass who speaks his mind is not someone I would trust leading a nation. More importantly, such a person who seems to always have the cunning ability to speak straight out of his ass is certainly not a role model I would ever want for my child.

In our home, my husband and I are very vocal with our son about our political and moral beliefs. We tell him about our leanings and explain to him why, always going back to our values and ideas of how we want our world to be. We try to teach him about the importance of respecting differences whether it be about religion, race, sexual orientation, or social class. I know my son felt sad about the idea of his classmates being forced to move out. I sense that he doesn't fully understand why this is so and probably feels it doesn't make sense. Well he's right about that, isn't he? IT DOES NOT MAKE SENSE.

It doesn't make sense for any child to be made to feel this way, that they can just be kicked out because of their color or religion.

It doesn't make sense for any child to lose friends just because they look different or practice a different culture.

It doesn't make sense for any child to be made to feel less. PERIOD.

How are those things any different from having political figures promoting ideas that discriminate against children of color or children from other cultures? These are children who are being made to feel less. PERIOD.

It is disgusting, and NONE of us should stand for it.

More:
ParentsraceParenting Politics
Newsletter Sign Up
Raise the kind of person you'd like to know
Subscribe to our parenting newsletter.
Successfully Subscribed!
Realness delivered to your inbox