When my 11-year-old son, Teddy, returned from overnight camp last month there was one thing he wanted, one thing he had missed above all else. Hint: it was not me, nor was it his father. It was the object to which he is more attached than allowance, Doritos and Kobe Bryant in his prime. It was his iPad mini 3.

We live in Hollywood where kids can't just skip out into neighboring streets or yards to play, and there are only so many rush hour 101 Freeway shuttling trips I can make in order for my child to hang out with friends (while retaining my sanity). I recognize my son's iPad is the place where he can still partake in a game of football with pals (on Madden), joke around with classmates (on group texts) or double-check homework assignments (on FaceTime). It's his virtual neighborhood.

It is also, however, the epicenter of contention in our house. The "screen time struggle" is familiar to my generation of parents -- the first navigating our way through the technology and accompanying media we didn't grow up with. A refrain of: "Turn it off!" "Do your homework!" "Download the clean version!" "Why don't you read any more!?" echoes through our homes.

There's no doubt that if left to his own devices with his device, Teddy would happily bounce from playing assorted game apps, to chattering on group texts, to sampling new music, to screen saving humorous memes, to designing custom Nikes we'll never buy - for untold hours on end.

Since neither my husband nor I (nor anyone else except perhaps a professional athlete or hip hop icon walking into his room) can compete with the iPad for attention when it's in Teddy's hands, we realized we needed clear parameters to wrest it from them. Before the new school year kicked off, a balance had to be struck between virtual and real life. Knowing that my 11-year-old heads closer to adolescence by the moment - as do his classmates - we also needed to match connectivity with safety, and to ensure he was able to delineate in-good-fun electronic banter with crossing the line.

I decided, therefore, to make "Teddy's Acceptable Use Policy," my own not-so-fine-print version of the guidelines that technology companies themselves draw up. 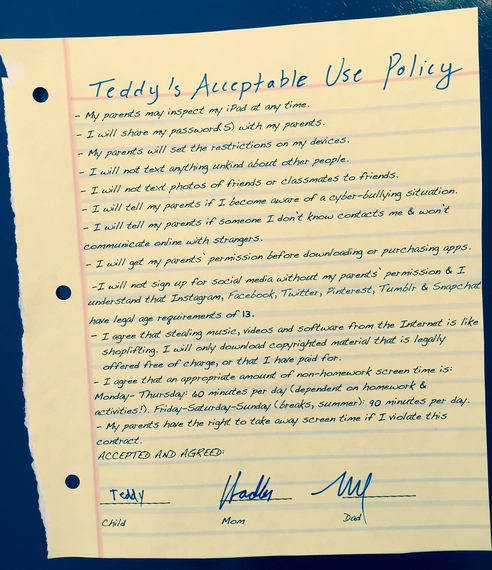 As parents who purchased said iPad mini 3 we had the leverage to simply force his signature, but I wanted our son to understand the reasons behind the boundaries. I shared the cautionary tale of my friend's 4th grader who was shown pornography at a sleepover by a classmate with an older brother - and without electronic parental controls. The child wished he could "unsee" the video but we all know that is as impossible as "unsending" something you wish you hadn't.

This is, I told my son, why children - who generally don't yet have the ability to think through all ramifications of what they post - are not ready for social media. But I didn't ask Teddy to simply trust me on this matter. We looked together at Instagram's terms of use and saw that even though some of his fellow 6th graders have accounts, it requires kids to be 13 to join. Facebook, Tumblr, Snapchat and Pinterest have the same minimum age listed. While Twitter no longer asks for a birthdate at sign up, the company's privacy policy explicitly states: "Our services are not directed to persons under 13."

We then discussed how lies can have consequences and it turns out if you claim you're 13 to sign up for any of the above, you won't be protected on that platform by the federal government's Children's Online Privacy Protection Act (COPPA). Teddy liked the idea of being shielded by the law - and understood that his father and I consider protecting him to be among our most important responsibilities as parents.

I am not under the illusion that our document can solve screen time struggles and the insatiable pull of the web. The user agreement will require as much commitment and engagement on my and my husband's part as our son's. We have to pay attention to the minutes Teddy logs with his device. We have to scroll through dozens of 11-year-old communications (good for 2-3 chuckles and several eye rolls). Ideally, we also have to set an example - which means we can't be constantly drawn to our own screens.

Here, I am reminded of sitting in the back seat of a sedan with my friend Rachel and her mother when I was about the age Teddy is now. Rachel's mom lit a cigarette, took a drag and said on the exhale, "Do as I say, not as I do." Yes, Rachel grew up to be a smoker.

More:
kids screen timeParentsparents-families-techBack To SchoolScreen Sense
Newsletter Sign Up
Raise the kind of person you'd like to know
Subscribe to our parenting newsletter.
Successfully Subscribed!
Realness delivered to your inbox