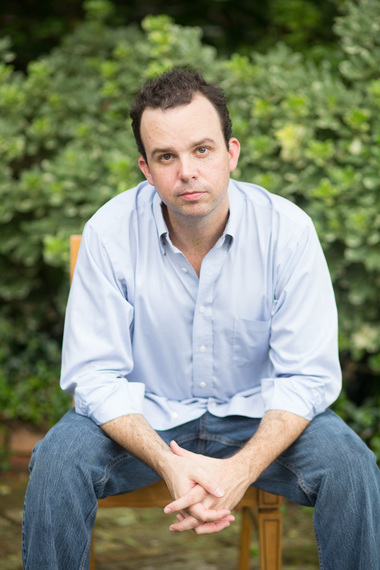 In M.O. Walsh's debut novel, My Sunshine Away, a thirty-something narrator tells of the summer of 1989 when he was 14 years old. He was obsessively in love with Lindy Simpson, a 15-year-old girl living across the street. After Lindy is raped one night and no arrest is made, innocence and illusions are shattered on Piney Creek Road in Baton Rouge's affluent suburb. Not until decades later, does the narrator come to terms with what happened, and the part he played. Recounting what took place that summer, the mystery of who committed the crime is finally revealed.

This is your first novel. How long did you work on it?

It took me seven years. I found writing a novel to be extremely difficult. My writing process is generally slow. I'm a constant reviser. I revise every time I sit down and begin working. I'd have days where I'd write for several hours and only produce one sentence. Revising is a pleasure for me as opposed to writing the first draft, which is like pulling teeth.

Also, my wife and I had two children during that time. I went from being able to write at night, to having to get up at four in the morning to write until six, when I began changing diapers and making oatmeal. (Laughter).

During those seven years, aside from writing, how were you earning a living?

I was teaching fiction writing and English Literature courses at LSU. During the last year, I've been teaching those courses at the University of New Orleans.

I understand there are some parallels in My Sunshine Away and aspects of your life.

The narrator and I share where we grew up. I based many things on the neighborhood where I was raised, and things I could easily picture. My neighborhood had creeks and woods behind the houses, as occurs in the novel. I didn't do many of the things this narrator does, which makes my mother very happy. (Laughter). I did take a lot from my own upbringing, but I see myself and the narrator as different people.

You said aside from having entertainment value, the novel has certain goals. What are they?

While I was writing it, I didn't consider it a mystery or crime novel. My concerns were always with character and doing justice to them. I wanted them to deal with personal tragedies. One goal was for the reader to appreciate a character coming to terms with things he'd done in his past which he never owned up to. I wanted to address how someone gets one's life together after realizing he played a part in something horrible that had happened. Although you might want to go back and fix things, you really can't. I think one of the novel's goals is to explore how people come to grips with their own mistakes. And of course, not everything can be fixed or even made better.

So, the novel addresses the crucial issue of moral reckoning. Is that a fair assessment?

I hope so. Also, I'm interested in memory and how people use it to their own advantage or detriment. I hope the reader can consider and appreciate how memory moves us through our lives.

Yes. Absolutely. At times, memory is an unreliable narrator; and, the novel deals with that, too.

You once said, "I believe people are losing their wonder." What did you mean?

My students are in their twenties and are technologically savvy. They have access to instant information. I've noticed conversations seem to be less interesting because whenever a question comes up, someone reaches for a phone and grabs the information, rather than discussing what they think the answer might be. In a discussion, you can find out a lot about the other person, and about yourself. If there's a question and someone guesses the answer, that guess may reveal so much about the other person. What does the other person imagine the answer to be? Today, many people value instant information as opposed to the quest for it. I just miss that conversation. I bristle when people automatically pull out their smart phones, cutting short the exchange. I miss people sitting around, willing to be wrong.

Only after writing My Sunshine Away and getting a publisher, did you show it to your wife and family. What made you hesitate to share it? I hope I'm not putting you on the spot.

(Laughter). No, not at all. Throughout the entire process of writing the novel, I showed the first three pages to a few people. When I'm working on something, I like it to be my own world without any other voices in my head. No one is suggesting things or telling me I've made a bad decision about a character or plot development. I want to make the mistakes for myself.

Critics have praised your novel as being both a literary work and a page-turning mystery. What thoughts do you have about classifying novels by genre?

I never thought about any classification for the novel. My main goal was character development, and not to be boring. A writing professor, Barry Hannah, once said to me, "Writing is easy. All you must do is to have something very exciting on every page." (Laughter). That advice haunts me, but is impossible to live up to. I think it's easy when you're interested in characters and ideas to let the plot wallow a bit while you explore things. My goal wasn't to write a thriller or mystery.

When I got an agent, she began trying to classify a genre for my novel. "Is this literary suspense?" she asked. I had no idea. I value language, and spend time on each word in every sentence, so I guess that makes it literary. But also, if readers want to know what's going to happen next, there's the element of suspense. Ultimately, I think it's literary suspense.

The writing in My Sunshine Away is quite lyrical. Which authors do you feel were your greatest influences?

I've always been a reader, in high school, college and beyond. So, there's a whole hodgepodge of writers I've admired. Specifically, Lewis Nordan was a writer from Mississippi who wrote a short story collection, Music from the Swamp. Reading those stories just cracked me open for some reason. I felt kindred to him in how he saw the world. That collection instilled in me a great deal of confidence in my view of the world. Barry Hannah was an important influence. I found specific books quite influential, including Willa Cather's My Antonia, and The Virgin Suicides by Jeffrey Eugenides.

Which authors do you enjoy reading now?

A book I read recently that totally knocked me out was Fives and Twenty-fives by Michael Pitre. It's about Iraq veterans who return home. It's incredibly well-written with a great mix of action, humor, pathos, fear and other emotions. I also love reading short stories by Kelly Link. I just got her latest book and I'm afraid to open it because I know what's in store for me. It's going to be awesome. (Laughter). Right now, I'm reading All the Light We Cannot See by Anthony Doerr. It's incredible.

What's coming next from M.O. Walsh?

I really don't know. I haven't started a new novel. I'm researching a few ideas. When I have some time, I'll go back and finish some stories I abandoned when I was working on My Sunshine Away. Now, I'm very busy with an author's tour. Honestly, I'm enjoying the hell out of what's happening right now with this novel.

Congratulations on penning My Sunshine Away, a beautifully written and poignant novel about love, obsession, and pain, asking how we live life to its fullest as loving and moral people.