I was painfully shy growing up.

I'm still introverted, but you can't realistically claim to be totally shy when you write stuff for a living and genuinely want people to read it. I love that part of writing -- hearing people's reactions, taking part in conversations, sharing ideas.

Okay, that might be a little lofty for a humorist. Maybe it's more like "taking part in inappropriate giggling" and "sharing potty training horror stories." Same concept, though.

I'd managed to avoid any run-ins with trolls. Those online bullies post inflammatory comments just to... what? I'm not sure. Be mean? Get an emotional reaction? Whatever the reason, I can tell you I was a little afraid of them. Confrontation is still confrontation, even if met through the glass of a computer screen. After all, that screen is the only thing separating the trolls from my thin skin.

But I knew it was only a matter of time.

Not long ago, I was excited to see one of my jokes retweeted by @HuffPostParents. Within minutes of reaching a larger audience, my words were met with overwhelming support and humor -- and one (I thought) unnecessarily venomous response. 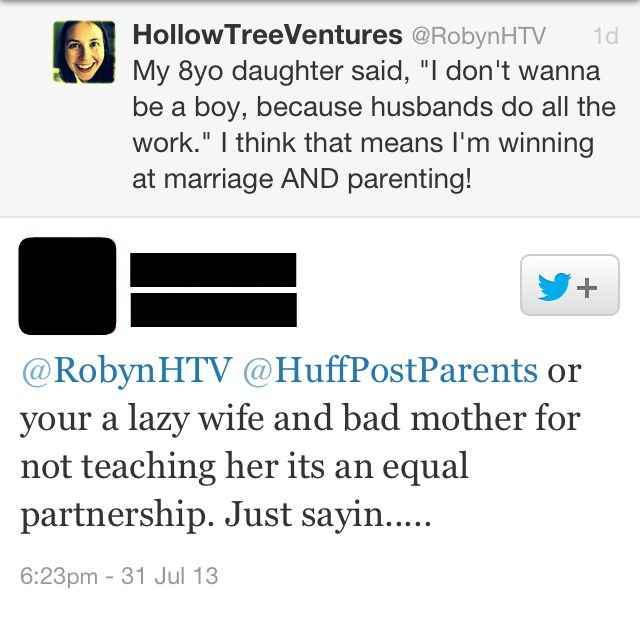 But is everyone allowed to launch a personal attack against someone else's marriage and parenting based on one 140-character quip? Can you say whatever you want, as long as you follow up with, "Just sayin'"?

I tried to be as nice as possible, within the parameters of civility she had set. 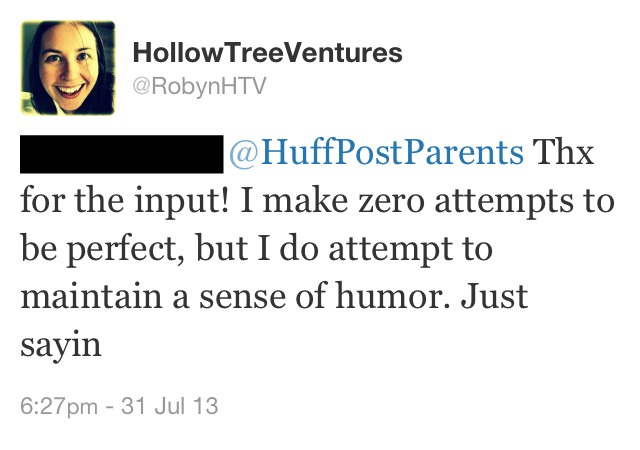 And then I realized something that surprised me: my feelings weren't hurt. Maybe she was being a bully intentionally, maybe she was having a bad day, or maybe she just had trouble more kindly expressing her opinion within the confines of 140 characters, but I found I truly didn't care.

I still didn't care when she continued to tweet to me, and instead of being upset or cringing from the confrontation, I continued to respond with as much kindness as I could muster. 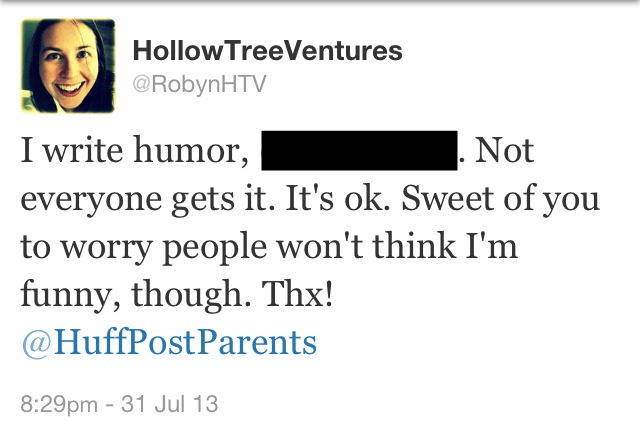 As I decided against congratulating this woman for being the very first person on the entire Internet that I ever had to block, my eight-year-old daughter came in and asked why I was laughing.

She knew I had posted her funny one-liner on Twitter (she was joking, by the way, when she said that -- she does know I occasionally lift a finger around here), so I told her quite simply that, in addition to a lot of really nice reactions, a bully had replied to it. She was as surprised as I was.

And I was happy to report to her that I'd responded the same way I'd always taught her to respond to bullies -- with kindness. And when that didn't work, with silence. And, the best surprise -- with my shy head held high.