In fact, outside of North Korea, it's next to impossible to try a sampling of Pyongyang's culinary classics, unless you're in Vietnam of course. Vietnam has everything these days. With all the political issues surrounding North Korea, nobody really talks about their cuisine. But the question remains, is it good? I went to find out.

Saigon is home to one of three North Korean restaurants in Vietnam, with Da Nang and Hanoi hosting the other two. There are other restaurants scattered throughout Asia, including ones in Cambodia, Laos, and China, comprising of actual cooks, chefs, waitresses, and entertainers from North Korea. These are not simply North Korean themed establishments with local workers. These are owned and operated by North Koreans who supposedly pay the Democratic People's Republic of Korea an annual fee of operations. In other words, you're getting a real deal sampling of what the elites of the elites get to eat in Pyongyang. 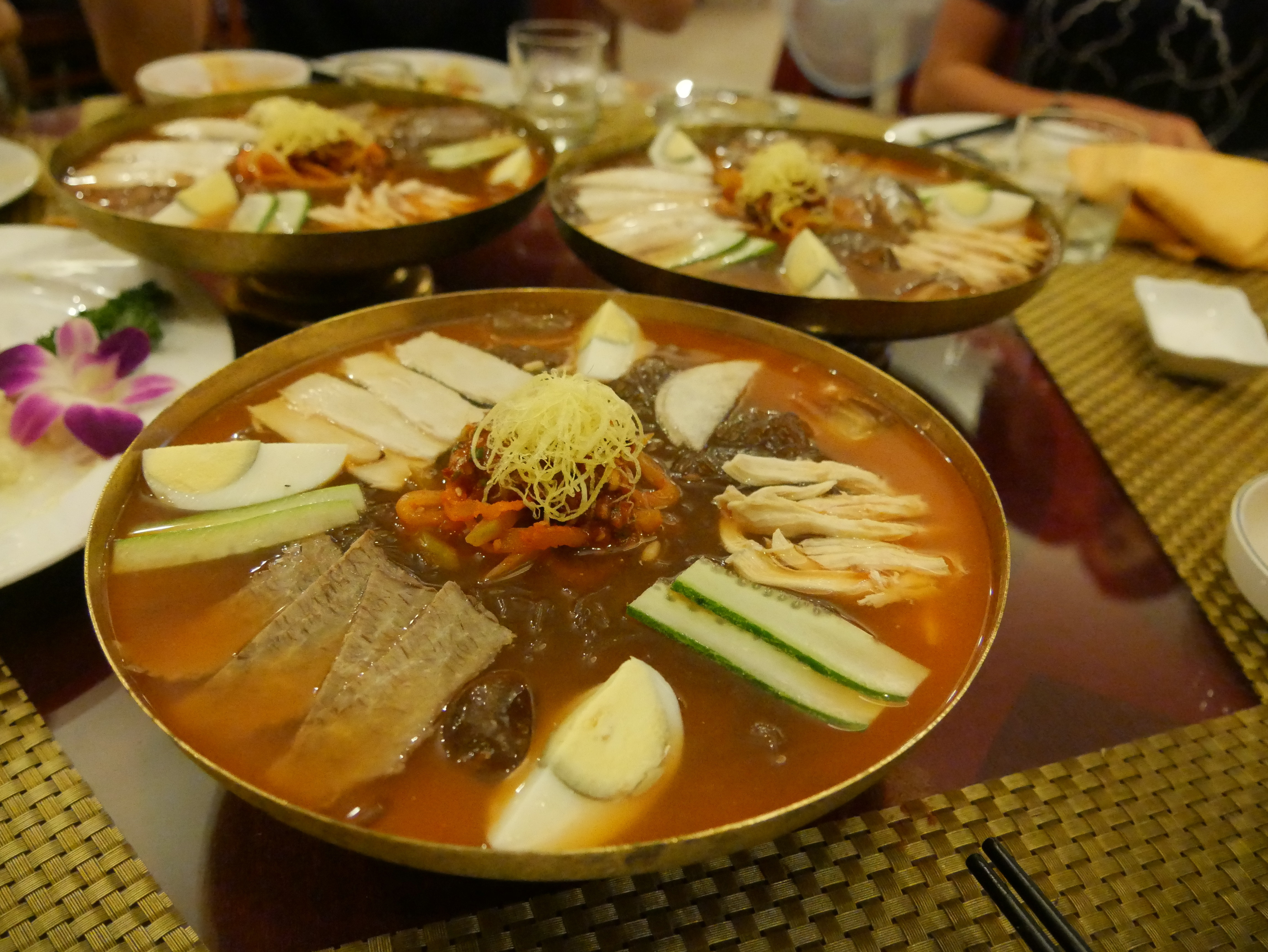 So how does it compare to the more familiar South Korean menu options? I'm sure we've all tried their all-you-can-eat Korean BBQ or kimchi from a jar. But what I ate at this restaurant can only be described as desolate. There just wasn't much going on with any of the dishes. For instance, there was a tofu with kimchi dish and that was it - Literally boiled tofu with kimchi on top. It didn't taste like... anything. But, you don't come to these restaurants for the food. You come for the entertainment.

At 7:15PM, the waitresses suddenly permitted video recorders to be turned on them as they performed a song and dance routine, while just a few moments earlier scolded me for filming the food. It's the usual Pangapsumnida song, which welcomes the patrons. There's a constant surreal feeling that comes with watching people who were born into a life that revolves around supreme leaders, singing loudly and proudly to a choreographed routine. It's confusing, yet mesmerizing to watch the spectacle unfold. It's as if I were suddenly in 1970 North Korea, but a look outside of the window brings me back to 2016 Saigon as the motorbikes whiz by.

When the final number ended, I actually wanted more, and not because they were perfect singers or that artistically inclined, but because the thought of watching a show like this, something transplanted from such an isolated country, was beyond simple entertainment. 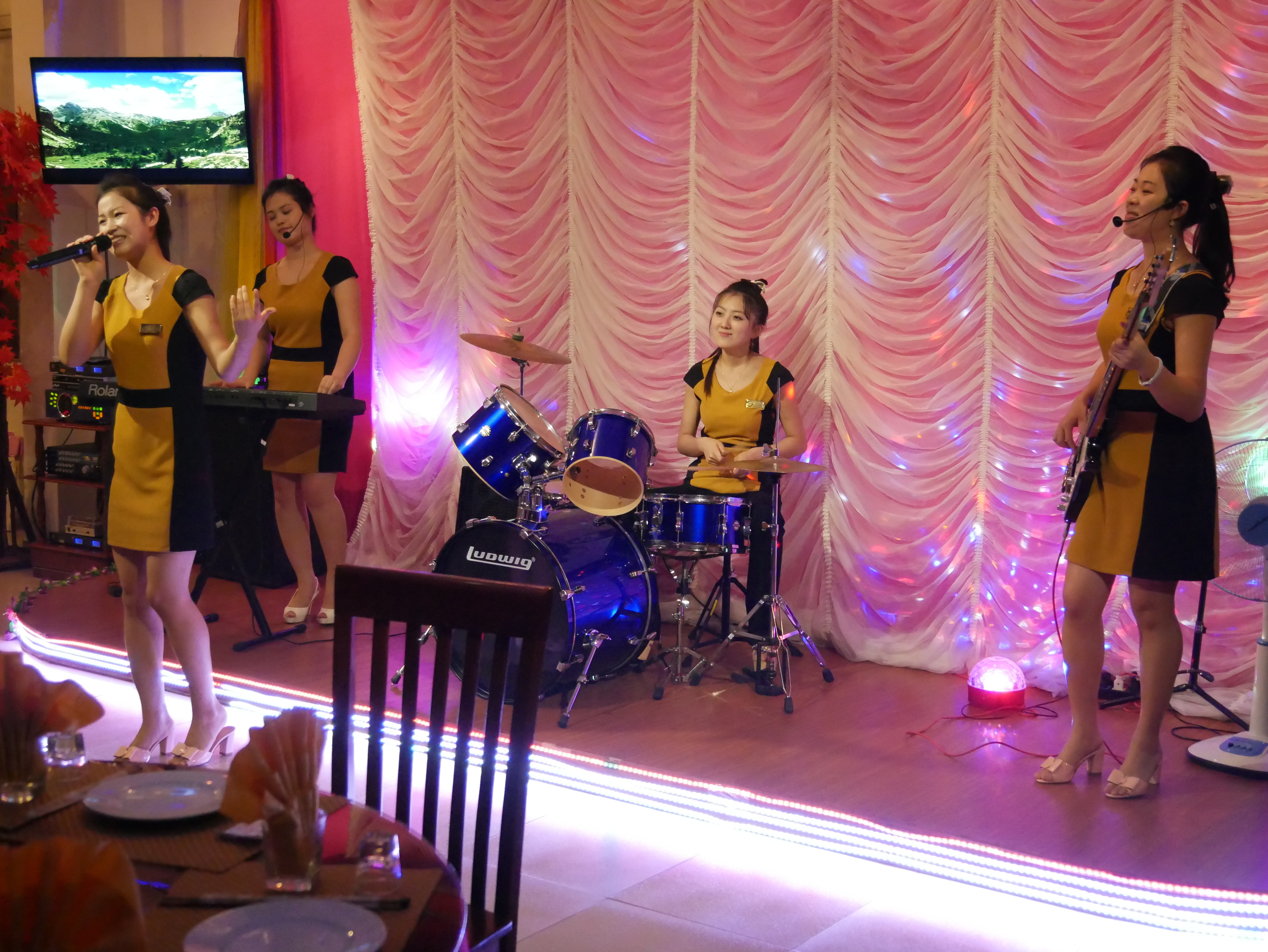 I made sure not to wear my blue jeans (a crime in North Korea because it's symbol of the enemy), and it lead to an awkward moment when one waitress tried to speak to me in Vietnamese, but I couldn't understand their accents, so I casually said I was from America. We just stared at each for a while until I got back to eating. While I was very scared for a moment the truth is it's not that intense. As with anywhere you go, as long as you're respectful, you shouldn't have anything to fear.

Some might argue that eating at a North Korean restaurant funds the country to keep doing their thing. I'm sure if you're still reading this, you're well aware of their dictatorship, and how dangerous, brutal, malicious, and every other negative adjective to follow, it can be. I understand that there could be a direct connection between the money that I spent there and the money that goes into the DPRK and that somehow I'm indirectly funding their nuclear program with my order of noodles. At the same time if you're going to make connections like that with everything that you spend your money on, then likely you'll just never buy or eat or go anywhere or do anything. I hear this all the time with certain people about certain countries, and how they have no interests in visiting a place because of past political reasons. The truth is, it's impossible to know where your money really came from and where it'll end up. Instead of looking at it as web of money, politics, or exploitations, look at it from a smaller point of view. If my 40 dollar dinner funds a North Korean rocket, then that rocket is probably isn't flying anywhere. As for me, I think rare opportunities to sample worldly cuisines shouldn't be passed over. So the next time you're in Southeast Asia, I recommend eating at a North Korean restaurant, just don't tell them I sent you.

The Pandemic Missing: Hundreds Of Thousands Of Kids Have Never Returned To School

Residents Can Return After Air Deemed Safe From Derailment