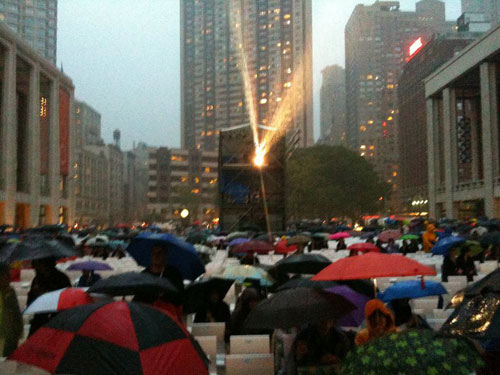 The Metropolitan Opera's season-opening performances last week of Wagner's Das Rheingold got lots of media attention, and with good reason. The opera, featuring an all-star cast, is the first installment of a technically complex new production by Robert Lepage of Wagner's four-part "Ring" cycle, one of the most ambitious and richest works of art ever created. Such a mammoth undertaking is unlikely to go unnoticed.

Much of the advance coverage had a defensive flavor to it, with commentators pondering the question of whether in a time of economic hardship the expenditure of many millions of dollars on an entirely new production made sense, given that the Met's old production had worked so well for so long. Writers like New Yorker critic Alex Ross, making a surprise appearance on the opinion pages of the New York Times, made spirited defenses of both Wagner in general and of the Met's plans.

But as the coverage multiplied -- including stories about the drama of the creaking sets not functioning properly in the climactic final scene on opening night -- and the inevitable "which singer was best" score-keeping got under way (for my money, Eric Owens and Stephanie Blythe made the strongest impressions), I began to worry that perhaps the most important elements of Wagner's Das Rheingold were being overlooked, or at least overwhelmed, in the coverage.

I'll begin by saying that I opted this year to sit outside on the Lincoln Center Plaza and watch opening night on the giant screen in front of the Met rather than from inside the house (another giant screen was similarly entertaining even bigger crowds in Times Square). The main reason I did this was that my client, soprano Deborah Voigt, was outside on the red carpet hosting the pre-show festivities, and I wanted to see how her work was faring with the assembled crowd (very well, it turns out; her interview with Patti Smith was a particular highlight, viewable here). Little did I know when I came up with this plan that it would be a wind and rain-swept night. But rather than annoy me, I found being huddled in the crowd and trying to keep myself dry under an umbrella quite thrilling. Wagner was a radical creator -- none more so than in his "Ring" -- and hearing the opera this way (kudos to the Met for the picture and sound quality) somehow seemed very consistent with the revolutionary spirit of the work.

When the performance ended, my pants were soaked entirely through because of the rain, but my mind was just buzzing with ideas inspired by what I had just seen and heard. First, it was awesome to be reminded anew of the staggering power of Wagner's score: the deep murmurs of the slowly building prelude, the vaulting brass themes, the sumptuous sonorities brought to life by the singers and the orchestra. But what really floored me was how contemporary the work felt to me -- how strangely 21st century American this myth-inspired work by a German romantic composer of the 19th century seemed to be.

Rheingold begins with the premise that the natural order is something that should not be tampered with, and that doing so will have grave repercussions. That is, it's something of an environmentalist treatise, a pre-Green-movement manifesto. As the Rheinmaidens lament the loss of their beloved gold, the consequences of its removal conjure up any number of scenarios from the degradation of the Gulf by BP's oil spill, to global warming, to the mountain top removal mining that drives the protagonist of Jonathan Franzen's Freedom to increasingly desperate action.

And then there's Wotan, the leader of the Gods. He creates a lot of the trouble for everyone by building Valhalla, the home (or should we say McMansion) of the Gods, with no money down (where Fanny and Freddie when you need them?). His plan to offer up the goddess Freia to the giants who built Valhalla is untenable from the start, as it would mean forcing the Gods to give up their eternal youth (her golden apples do a lot more than just keep the doctor away -- and remember, there was no Botox in 19th century Germany). And the alternative plan to pay the giants by stealing the Rheingold from the dwarf who stole the gold from the Rheinmaidens to begin the whole downward spiral has all the credibility of a Bernie Madoff investment scheme, or any number of or budget plans coming out of both parties in Washington these days.

These were just a few of the things that popped into my mind during the performance, and many more have come to mind since opening night a week ago.

As the Met's Rheingold built to its final climactic scene, it became clear to me that staging such an ambitious new production of Wagner's "Ring" wasn't a luxury that we needed to indulge in on any kind of aesthetic grounds, but rather a necessity that we should support and engage in wholeheartedly. In a world where political leaders lose themselves, like Wagnerian Gods, in adolescent diversions, great artists such as Wagner provide reminders of what's at stake when human beings fail to address the real issues at hand.

Wagner's "Ring" is more than just a grand evening of musical theater and an epic work of art: it's also a cautionary tale that we ignore at our own peril. And if a new production of it gets even more people thinking about it than they would have otherwise, that's all the better. 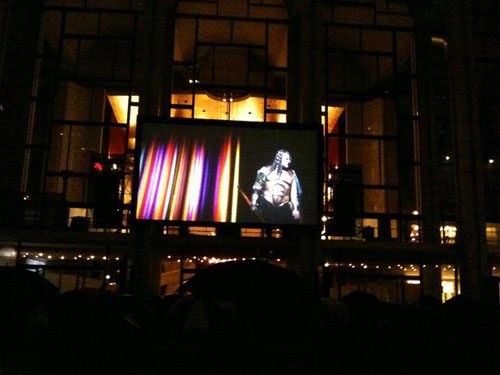 Bryn as Wotan on the big screen in Lincoln Center Plaza