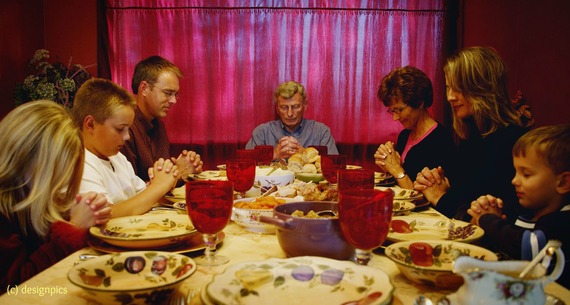 Millions of Americans will sit down around a special table graced with abundance this holiday season. We'll set aside the time and traverse the miles, all to be with family and friends for the sole purpose of giving thanks and celebrating another year.

So let's count our blessings, shall we?

We live in a country birthed from those who fought for independence. Rebels and refugees and exiles were driven from other lands where their right to self-determination and to worship as they saw fit had been denied.

We celebrate Veteran's Day - honoring the sacrifice of men and women and families who gave much that this nation might continue to be free.

We are steeped in honor and traditions of protecting dignity for the least of these, aiming for equality, and edging toward liberty and justice for all. Entrepreneurship, opportunity and creative ideas for solving problems have been our lifeblood. And freedom our beacon and our calling.

Even when we took a wrong turn - we wrestled our way back. So slavery and "whites only" segregation and voting rights for white men only and internment camps for whole nationalities of American citizens (Japanese) have been cast aside.

We have planted our feet on a long path to justice. Though steep and often painful - we have pressed on together.

Much too recently we were wounded.

9/11 was a blow to our innocence and insulation. We were jolted awake to the knowledge that extremists, under the false cloak of religion, sought to sow hatred and destroy free will and blatantly lay waste to precious human life.

In Paris (with echoes in Beirut and Mali) the terrorists struck again. And again civil society the world 'round was rocked.

So what do we make of this moment?

The ultimate goal of terrorists is to instill and install terror in our minds and our hearts. To so infiltrate and violate trust that everyone becomes the enemy. To so pollute our minds with noxious emotion that rational thinking is not possible.

The goal of the terrorist is to outlaw debate. To eliminate ethical speech. To remove questioning and deliberation and fast forward from dissent to judgement to execution.

It is right and necessary to defend against the terrorists.

But what is our most powerful weapon?

Some proclaim that Islamic terrorism is at the root of the problem - as if a religion is the cause and therefore we should watch and restrict the rights of all Muslims.

But does not ISIS represent Islam in the same way that the KKK and white supremacists represent Christianity?

Some proclaim that the women and children and men who are fleeing for their lives from bombs and chaos and utter destruction in Syria are the adversary and the target. Borders are closing. Sanctuary is being withdrawn. And winter approaches.

Civil society is being gripped by fear and so fences are drawn high to more tightly define our own safe haven. While millions displaced in their own ill-fated bid for freedom grow more desperate as now their only goal is to survive.

So if help is denied across civil society, where do they turn then?

Too many Christians are being tempted to forget the parable of the gathering of all the nations and the judgement based on a simple edict:

Too many of Jewish descent verge on blurring a time when a broad brush of blame and mass monitoring and round-ups against their own were advocated for another ominous purpose in the name of "security".

Too many Americans risk betrayal of our very heritage and foundation:

Not like the brazen giant of Greek fame,
With conquering limbs astride from land to land;
Here at our sea-washed, sunset gates shall stand
A mighty woman with a torch, whose flame
Is the imprisoned lightning, and her name
Mother of Exiles. From her beacon-hand
Glows world-wide welcome; her mild eyes command
The air-bridged harbor that twin cities frame.

"Keep, ancient lands, your storied pomp!" cries she
With silent lips. "Give me your tired, your poor,
Your huddled masses yearning to breathe free,
The wretched refuse of your teeming shore.
Send these, the homeless, tempest-tost to me,
I lift my lamp beside the golden door!"

--Text of the poem, New Colossus, by Emma Lazarus engraved on the Statue of Liberty (itself a gift from France)

So this is my holiday prayer...

That we remember who we are.

That we claim the noblest examples of what we have been and who we are called to be to defeat this present assault on humanity.

That we refuse to swallow the terrorist bait and bow to a level that turns deaf to plaintive cries for help or condones wanton disregard of life and human dignity.

That we stand tall and proud to continue to be a bastion of hope and light and possibility for the world.

That the brave who have gone before us would not be mocked, as we reject the public calls to imitate the deeds of evil as a mask for fright or grief.

That we call on the politicians who would represent us and speak in our names to unite us not by appealing to our lowest and basest fear, but through the vision and challenge of our highest and most glorious aspirations.

So let's count all our blessings...

and then willingly and graciously embrace those that have few.

Let's be Americans (at our best) this season.