Editor's note: Actress Rose McGowan came under fire today for comments she recently made about the gay community while talking to novelist Bret Easton Ellis. In the blog below, she responds to the controversy.

I was on the Bret Easton Ellis podcast the other discussing sexism and misogyny. I made a dumb generalization, for that I apologize. For everything else I said, no. I will not.

Where does it say that because of a man's sexual preference, I don't get to point out character defects? When equal pay for women was voted down by every male Republican there was no LGBT outcry. I wondered why that was? After all, lesbians are women, this affects them, too, right? Misogyny infuriates men and it endangers me as a human. It also endangers the LGBT community. Empathy towards the plight of women isn't making it better. Your voice will. Could I have articulated my frustration in a better fashion? Undoubtedly. For that I apologize, but I stand by my overall point. The rights that have been earned by the community are simple civil rights. What I want is for gay rights activists to help other disenfranchised groups. These activists are experts while so many other groups flounder. It's time to share the wealth and knowledge. I may have said it inelegantly, and made a dumb generalization, for which I apologize. Gay men certainly aren't MORE misogynistic than heteros, but I've met some that have come damn close. In some ways it's more damaging, because it's coming from supposedly enlightened people. I do expect more from a group of people that understands discrimination.

The LGBT community absolutely needs to combat the misogyny in their midst. I've lived and breathed gay rights for as long as I can remember. I've seen so much change and now I want more. Women, myself included, have given blood, sweat and tears to the gay rights movement. I'm asking for help in return. Casual and accepted misogyny no longer works for me and it shouldn't work for you.

Here's a small example of being the change you want to see: I was with a gay man the other night who was talking about the sexually liberated Blanche Devereux of the Golden Girls. He was going on about what a slut she was. I asked why he'd say that so thoughtlessly? If I'm not supposed to say (and I don't) "that's so gay," surely this man can start thinking about why it's acceptable to slut shame. He thanked me for opening his eyes. This is how we do this, one on one. Catch it when it's happening, and challenge it.

By the way, if you want to know what I was doing at the Beverly Hills hotel, just look at the picture. I sent it to the Sultan of Brunei, I'm fairly sure I won't be getting a response. 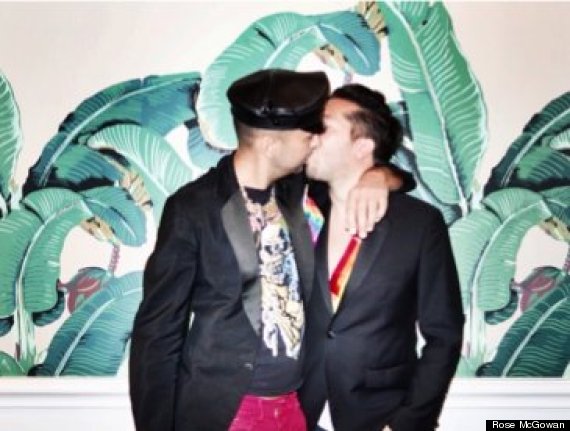 And as for those who question my allegiance to the gay community and try to paint me as a gay hater, I have a big eye roll reserved just for you. I'm human, I mess up, but I mess up with love and good intentions. I feel like I'm in a fight with my family.

Now, let's go do the right thing, myself included.