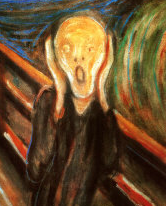 1. My son's allergies will get worse. They are not numbers on paper. I have seen my son Eden react progressively to a trace of walnut oil, peanut butter, sesame seeds, milk, soy, one green pea, one fava bean and sauteed garlic. And those foods just rolled off the top of my head. When I describe Eden's allergies to strangers, usually their first question is "But he will outgrow it? Right?" Maybe. But his is a new generation of allergic children and some medical studies are playing catch up.

2. My son will decide to be a Tough Guy. In the Journal of Allergy and Clinical Immunology there is a study that was performed on a large university campus that revealed that only 39 percent of students with an identified allergy consistently avoided that allergen. And only 47 percent of the students consistently carried their medications.

3. My son won't be well nourished as he grows. Teenagers favor group meals at pizza parlors where he may be feeding his growing bones with cheese-less bread and sauce. He may feel too embarrassed to keep toting safe food around. I hope that instead his hunger will guide him to eat well, despite the stigma of being different.

4. I will screw up and forget my Eden's medicine. This scenario is, in fact, a reoccurring nightmare of most allergy parents. That red nylon kit, complete with Epipen and enough Benadryl to gargle, rinse and repeat, will get left by the door. Or in the car. Or back at the hotel. Or on the subway...

5.Despite the promise of a few groundbreaking treatments, my son will never know the joy of eating freely. I have a particular fantasy:

Eden reaches, takes and offers. He is a prince. I move his plate closer, butter his dinner roll, our lips anointed with infused oils because he is a prince and I am a queen. We are not ruled by fears -- instead, we rule the table.

More:
healthy livingfood allergiesHealthFood
Newsletter Sign Up
The essential guide to taking care of your mind and body
Subscribe to HuffPost’s wellness email
Successfully Subscribed!
Wellness delivered to your inbox