Under a sky pregnant with stars, his laser pointer stroking constellations and planets as he named them, astronaut Story Musgrave told his audience,

"This is the first time in history that humans are taking most of our information from 'content' developed by other humans, and almost completely ignoring nature. We are creatures of Earth and cosmos, and we need to live in balance with both." 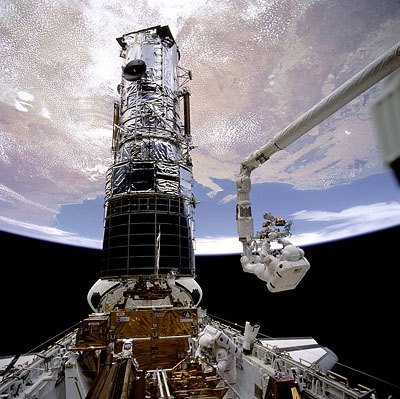 Astronaut Story Musgrave hangs off the arm of the space shuttle performing 'eye surgery' on Hubble.

The awestruck crowd of about 400 was seated in the natural amphitheater surrounded by jagged peaks in Badlands National Park. As the keynoter for the park's first astronomical festival Dr. Musgrave told us how his early years exploring the forests in his Massachusetts neighborhood prepared him to perform delicate "eye surgery" on the Hubble Telescope in outer space in 1993.

"I convinced my mom to let me go into the woods by myself at night, and by some miracle she agreed. Going in, I'd feel the tree bark with my fingertips and memorize it so I'd know what I should feel for on my way out. That skill came in so handy when I was hanging off the spaceship fumbling around in my suit, trying to line up those lens."

Today there's so little nature in our lives that doctors are actually writing prescriptions for their patients to get outside and take walks in the parks in order to become healthier. Curiously, the venerable E.O. Wilson established 30 years ago the theory of biophilia, which says that our need for nature is biological, not just recreational, since we evolved in nature. (I'm meeting him Sept. 26 at the 125th Anniversary Gala of Rock Creek Park at the Italian Embassy in DC!)

So is there a relationship between our great disconnect from nature and the strident, bombastic attitude which seems uppermost in our country right now? So much "content" and "information" from innumerable sources, but little of it points us to beauty, to our shared values as human beings, or to the "truths we hold to be self-evident."

I am sometimes tempted to tune it all out, EXCEPT that I've toured 171 units of our National Park System and I KNOW the struggle, the blood, sweat, tears, the courage endurance that it took to get our country to the state where every American has a voice. Knowing that I am the beneficiary of such a huge investment of human and natural capital, how can I sit back and let it all go down under the cult of greed and personality to become an oligarchy? The first director of the National Park Service Stephen Mather was right when he said, "He or she is a better citizen, with a keener appreciation of the privilege of living here, who has traveled the national parks."

So I propose that exploring our National Park System is the cure to reconnect us with nature and remind us that we are part of it and not ABOVE it, to remind us where we've come from and show us where we're going. I'm starting by inviting 40 Members of the US Congress to join me on a virtual "Voyage of Rediscovery." Like the 19th Century Corps of Discovery explored the physical dimensions of our continent, this tour will reconnect us literally with the homeland and plumb new internal horizons of being.

Over the years Frank and I have taken thousands of people on their first visit to a national park. We've seen it affect the young man who grew up dodging bullets in his Miami neighborhood the same way it affected the buttoned-down founder of a successful equity firm. It made them lower their defenses and become childlike again for a few hours. I'm banking on any crack in the shield to provide an opening for change.

Once they've agreed, I'll enlist my friend Sid Wilson's A Private Guide to provide us with luxury transportation. Our colleague mountaineer Stephen Shobe, who's summited four of the highest mountains on Earth, 65-year-old outdoorswoman Carolyn Hartfield and nature-writer Jarid Manos will be among our guides. 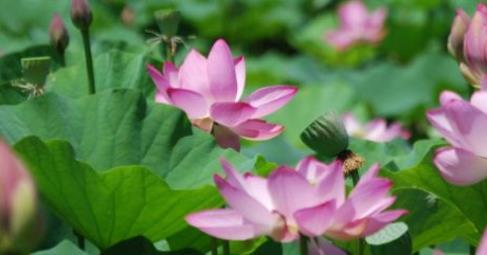 I visualize our guests piling out of the coach at Kenilworth Park Aquatic Gardens in DC, our first stop. Their jaws drop in amazement as they walk through the sheltering tall oak trees and into an explosion of bobbing multicolored lotus and lily blooms as far as they can see. I see them strolling leisurely along the path in pairs and threes, stopping to observe a particularly beguiling bloom, talking desultorily with their colleagues. Thoughts of competition and parties and agendas have been replaced by the sweet feelings of appreciation I felt when I first saw the Gardens, putting me in mind of the Grand Canyon.

I see them listening attentively to the young park ranger of color sharing the story of Walter Shaw who lost one arm in the Civil War and spent the rest of his life creating the water gardens which his daughter Helen persuaded Congress to save as a park. They'll be struck by the power of the human spirit to persevere and collaborate, to leave a legacy that benefits society.

From Kenilworth we'll drive to Shenandoah National Park in Virginia. Our guests are relaxed and I can see the look of satisfaction and joy on their faces of the congressmen as we navigate the winding Skyline Drive, and stunning views of stacked green mountains and valleys undulate into view. 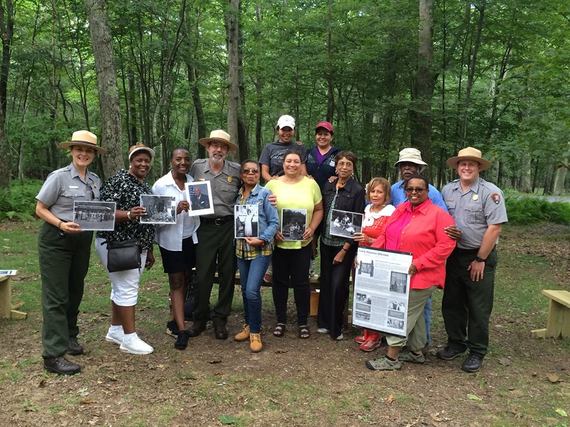 Audrey Tutt-Smith and Elaine Blakey are in this picture taken last year at Lewis Mountain and their families are in the photos and artifacts the park ranger shared.

We'll take leisurely walks through the park ending up at Lewis Mountain, the section reserved for the use of Negroes until the 1950s. Our friends the venerable Audrey Tutt-Smith and Elaine Blakey who grew up in nearby Luray will share how much they looked forward to their visits to the park in the segregated years and how they enjoyed being in nature. They'll tell how the great smell of food cooking in Lewis Mountain drew white visitors across the berm that had been erected to keep the Blacks out of sight. They'll share that their story and artifacts are now part of an interactive museum exhibit in the park's visitor center.

At day's end we'll drive down the mountain to our friend Darryl Haley's bed and breakfast in Luray. Stay tuned for the next installment of our tour and the "humanizing" we observe!