There are some habits that are really hard to break!

For my BFF and me our summer vacation to Maine is one of them, and it is that time of year once again. When we think of Maine, we think of bikes and beaches, lighthouses and lobsters. We are the ones who stay on the coast not the woods, the white waters, or the lakes, although we are wondering if we can break our present habit and expand in the future.

However, four years ago, when I transitioned, this "habit" was tested mightily!

My book, No! Maybe? Yes! Living My Truth, is dedicated to my BFF Tessa and I wrote:

We said our goodbyes when I transitioned, but they did not stick, as we both learned that the meaning of true friendship was more important than my changing gender.

Not that this was an easy process! I transitioned in April of 2011 when I had FFS (Facial Feminization Surgery). We were not certain that we would actually take our annual summer vacation in Maine as we were playing everything out day to day. We had the hotel reserved and I was prepared to, although with thoughts full of anxiety, go on vacation by myself.

Make no mistake about it; transitioning gender will test each and every relationship in your life. As we come to terms with the relationship with ourselves, we ask everyone who knows us, who cares about us, who loves us, to go deeply inside and ask themselves what our transition means to them first, and us a distance second. Although we know how hard our journey may have been, we often have no idea how difficult the journeys we have asked all these people to go on also, and there may be no way for us to help them, as they are the only ones who can find the truth in their hearts about the relationship.
...

The hotel was reserved in my old name, so that was the first thing to change. Tessa did not come in with me when I did this. We went to the beach and this was also new for me in how to dress for the beach - yes, I was full time but still had male anatomy. Both of us were self-conscious, so it was a bit uncomfortable. The mornings biking were fine as we were pretty much on our own, but anytime we were in crowds, and for dinners, she thought people were looking and pointing at us. By the end of the second day she no longer wanted to go out in crowds and we tended to stay off by ourselves. When we left we debated whether to hold the room for another year, as it was not the best of vacations. We did it but had no idea what the next year would be like.

The following summer trip occurred after I had another round of surgeries - gender reassignment and breast augmentation. For me swimsuits were no longer an issue and I was excited to go to the beach. It was a little easier for Tessa but she still got triggered a few times when we were walking on the street and she thought people were pointing at us.

I don't know who has changed more over the past four years, she or me, but even though she tells me there are times she is a little uncomfortable, we now go anywhere and interact with people in stores and on the street just as any people would do. Certainly I ma more and more comfortable in my own skin, but it seems that Tessa's journey to being comfortable in public with me may have been a more difficult journey than mine. Our friendship kept us going even through difficult times. I made no demands on her. I was there and understood and accepted her discomfort, and would follow her if she felt she/we needed to isolate to make her feel better.

It has been four years since my transition and our friendship has survived. The concern of me being me no longer seems to be a potential embarrassment to her, and she tells me she is no longer worried about the potential judgment of other people. Perhaps it is that there is more awareness of transgender people, or perhaps I may be less obviously a transgender person. Unless someone recognizes me - the whole idea of being "read" is so beyond me - but with my book and blogging and interviews - I am becoming an open public transgender woman. What is more likely is that Tessa too, has changed and evolved as a person and has become more comfortable in her skin, her choices, and her friendships.

We said our goodbyes in 2011, but old habits are hard to change, the goodbyes were ignored, although not easily. We still are looking forward to bikes and beaches, lighthouses and lobsters. Oh, and that habit we had for a while of each of us having anxiety, well that habit has been broken! That's a good thing! 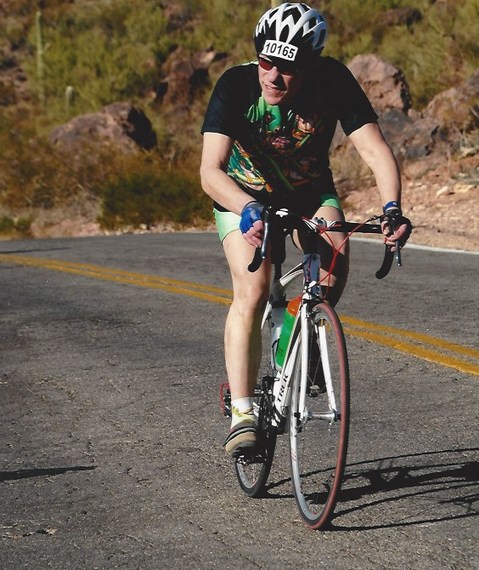 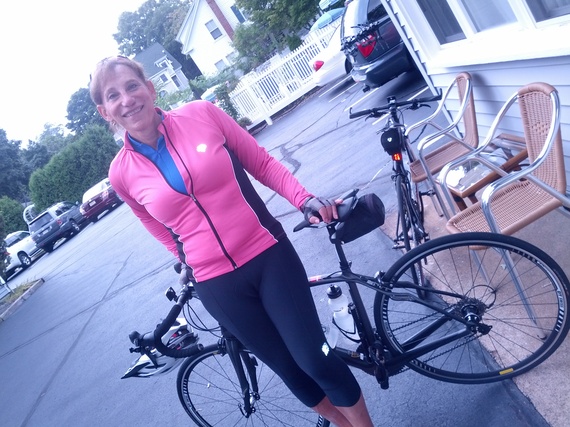 Grace getting ready to bike in Maine August 2014