When I was young, growing up in Brooklyn, I was taught that New York City, and America was "The Melting Pot," where as you entered New York Harbor, the grand lady -- The Statue of Liberty, welcomed the tired, the poor, the huddled masses yearning to be free.

I was young and took this literally. After all, I was not that far removed from this, as my grandparents on both sides arrived here from somewhere in Eastern Europe in the early 1900s.

As a second generation American, I have been pretty thoroughly assimilated and certainly have as one of my core identities, a born and raised American. However I have never forgotten that was not true for people in my family who I remember.

Now I wonder how times have changed! When did I, and so many of my friends become the "Other?"

I know I have talked about diversity before. There are many reasons that makes me feel it is important that I talk abut it once again, but perhaps now through a different lens.

Perhaps it was only 5 years ago, when I "officially" reached my self-acceptance as a transgender woman that I became a part of the LGBT community and achieved my own "otherness."

Five year ago, the challenges that I worried about included how my family, friends and co-workers would accept me. I knew there may be challenges and the political agenda was to help states pass non-discrimination laws, but I had no idea that there would be states that would actually do the opposite and start to pass laws that would allow discrimination against LGBT "others."

I am not at all certain how I would have responded if what has been going on since SCOTUS passed marriage equality, had happened when I chose to transition. But that was then, and now I have found my voice in a variety of ways.

In his new book, Negotiating the Nonnegotiable, Daniel Shapiro, explains the challenges of one's tribal myths and core identity impact each of our world views and ultimately our relationships with others.

I have shared the following picture below before in a slightly different manner. It shows primary and secondary characteristics of diversity. When I teach with this slide I always ask, what makes one of these characteristics more important than the others? Is gender or sexual orientation the most important? Is religion? Is race? Is ethnicity? Is income? And so on and so on.....

My goal was to get people to really think about this, as personally I do not think any one is more important that the others. However it requires energy to think about this deeply and a willingness to go to a place of love rather than a place of fear. It is easy for many to not be willing to spend this energy. This saddens me. 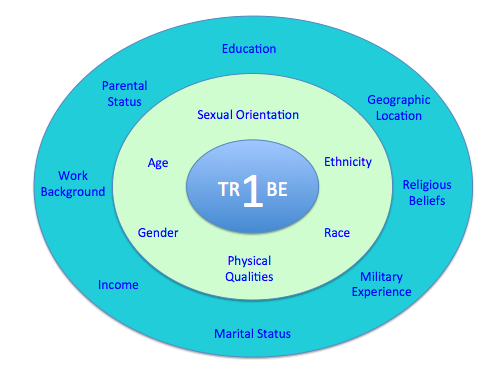 It seems there are some in our country that believe the term "melting pot" refers to raising the heat so high that the pot that holds all of us, of melts down to its base metal and leaves all of who were in it to jump overboard and try to find safety in the burning waters of hate; each on their own. Perhaps they feel threatened by all of the "others" out in the world and are trying to protect their own core identity and mistakenly believe there is no possibility that there is room for all. This is not and never can be a justification for hate and separation, and discrimination. Never!!!

This is not my America. Not at all!

We really all are One TR1BE. We are never just one thing. And no two of us are the same!

I believe in the American melting pot that holds all of us; all of our differences; where we learn to mix, to accept and to learn from each other, so that we can all live and grow to become the very best version of ourselves. This is really what has made America great -- nothing else!

I believe in the America that shows hope and love to all of the "others" as much as it loves itself.

I hope that you do too.