My father was born in the Bronx in 1914. By birthright, he was a U.S. citizen. His parents were immigrants from - as far as I know - somewhere in Eastern Europe. I never knew for sure where they came from, and I never knew them.

My father's mother died during the 1918 flu epidemic. I have only been able to piece together the bits and pieces of the stories. I find it hard to comprehend what it was like for him and his brothers to grow up in the 1920s and 1930s on the streets of New York in a broken/blended immigrant family. He never finished high school and it seems he led an interesting life of survival on the streets. His birth name was Hyman Rabinowitz (which is what I knew him by), but I know during the war years he was known as Joe Gorrell - not wanting to be identified as Jewish. However everyone just called him Blackie. One story I heard that in his teens on the streets of the Bronx he was known as little Blackie, as there was another with that name. Before WWII he drove a junk truck from the east coast through the mid-west and back. However if there was one word that defined him, and his spirit, he was a gambler. 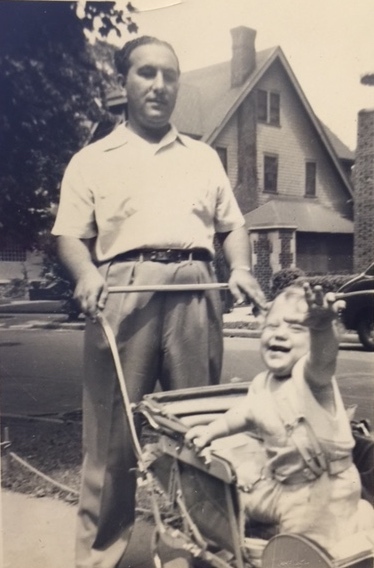 Blackie, and a very early version of me - late 40s

By the time I was a young boy, my consciousness knew that my parents argued about his gambling. I never longed for anything, but the reality was we did not have very much, as my parents and I lived in a 2-room apartment in a large building in Brooklyn. Each morning he would walk to the paper stand and get the scratch sheet and the Morning Telegraph, so that he could handicap the day's horse races. I always listened to him on the phone as he called his "bookie" without having a clue what it was all about. My father worked 6 days a week in a gas station and often drove an AAA truck in the 50s. I remember one Wednesday when I was in the third grade when he let me stay home from school and took me with him to Belmont Park to watch the horse races. At first I was excited - although the other kids went to baseball games, I was going to the track! In the second race he asked me to pick a horse. I did, it won, and I was excited. The next race I picked again and it lost. I hated this. I realized it made me a sore loser and I did not want to bet again. As I watched my father, losing never stopped him. It took me years to figure this out.

ADDICTION
A compulsive behavior with something external to ourselves, and continuing that behavior in spite of the consequences to ourselves and others.

My father was a gambling addict. It did not matter if he won or lost. He needed the "action" of the event. Whether it was losing money he had or money he did not have never mattered, he needed, he required the "action" to survive. However it developed, and I look at this without judgment, gambling was his spirit. From his own eyes, from his own heart, gambling defined Blackie!

Perhaps the apple did not fall too far from the tree! I never thought of myself as a gambler. Losing always felt worse that the excitement of winning to me. I never thought that I had any addictions. Convenient denial, perhaps? After a few years of teaching/counseling in a substance abuse clinic and using the definition of addiction above, I finally had to admit that I apparently had a compulsive behavior that was....what was it...defining, acting out or hiding.... my true spirit. I cross-dressed - I could not stop - I could not control it! Was this so different than my father's gambling? I know that defined him, but what in the world defined me? What was/is my true spirit? Why would I hide so much of myself? What was I afraid of?

I hated losing! If I ever dared to let my true spirit out, I feared the losing, the losses of everything and everyone in my life. This fear blocked me at all turns. Until the moment I could admit my truth to myself and accept it. I still feared the loss but there was a glimmer of hope that I cold also possibly win something here. After the decades of hiding, denying and avoiding my true spirit, I chose to move forward and go on the journey to live my truth.

It is now over five years since I made the choice that allowed me to win my life back. It is over four years since I have been living as the woman I truly am. My relationship with my father - who has been gone for over 20 years has changed and is still changing - all for the better. I think I can understand him more and accept him more.

Sometimes, in my dreams, I let him know this. He lets me know he loves me - which is something he never said when he was here. My relationship with myself is also changing and also for the better, and I remind myself this each and every day.

For those who have ever gone to a casino and won, and then continue to gamble, there is a saying that you are playing with "house" money. You can enjoy the "action" without worrying about losing your own money. Once I claimed and chose to live as my true spirit, and as myself, I find that I have won so much of myself, my spirit, that I am playing out the rest of my life with house money! But is has nothing to do with finances!