Sometimes, it seems that the line between my life before and after transition appears to be a bit blurred. At least it does to me.

I am now a five-year survivor of the adventure of gender transition. It was at 6 A.M. on a Thursday morning... April 28, 2011 when I had my son dropped me off at the Boston Medical Center. He was quiet as he felt he had to do what his father asked. I did not think to ask him what he thought about what I was about to do. After all, there was not much I was able to think about except this myself.

I did not sleep much the night before waiting for him to come get me. The thoughts running through my head were going off in so many different directions and proving impossible to rein in. One voice was yelling that this was the end of my life. Another was arguing that it was the beginning of my life. They were both right, but neither would give in to each other.

Those voices have had enough time to quiet down and learn to live in peace. Today, when I go inside to find them and ask what they have thought about the last five years, they look at each other, share a small grin and agree they had no idea that it would become so peaceful inside of me. They know it has not always been easy, but they agreed that the overall sense that everything is as it should be, is the overall internal theme, that they are now enjoying.

I remember on that morning five years ago, as the anesthesia was being given to me, my last thought was saying goodbye to the life I had lived for 64 years. Later I was told that I was in surgery for nine hours -- but of course I had no sense of it at all.

I am not a big fan of coming out of anesthesia. For me it usually features some crazy dreams where I am not sure about time or whether I am in or outside of my body. I am pretty sure I try to move parts of my body and eventually find some success as my consciousness returns. This time I struggled as I could not even open my eyes and felt my head wrapped in what seemed like a giant pillow.

By the next evening, I had at least one eye opened a bit as my son came back to take me home so I could spend the next month recovering in my own bed -- which I so much wanted to. Months later, he did share that when he saw me when he picked me up, it was one of the hardest things he ever had to do.

As soon as I could look in the mirror, I had that same internal thought. I can understand why he said that. 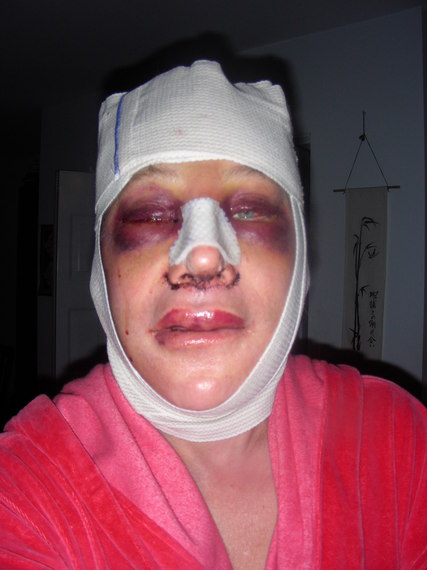 It's been five years since that day, and the point in time that I call my "alignment day." Sure, there were more surgeries after that point in time, put this was when the man stopped appearing in the world and the woman started. There were so many adventures when I returned to work in my two work places. There were so many discoveries to be made as I was learning who Grace really was.

I know that there are many on this type of journey who have the goal to let go of their old life and try to blend in as the new person. There are also those who may become activists and use their lives and identities to make a difference in the world, in many different ways. There are also some who may be angry on how the world sees, perceives, or treats them as some oddity to be avoided or punished. I never had a plan for my journey as my only goals was achieving the alignment to be who I knew I was inside.

Now, five years downstream from that day of transition, I am not sure when all of those paths that I considered and most likely traveled on have blurred together. Today, I just get up each morning and am just me. I get up like most everyone does, and I am only focused on what I need to do that day. For many decades, my first thought upon waking was to make sure I put on the proper mask to prevent the world from seeing the real me. It is so much easier not wearing any masks.

It is only over the past few months that I have been able to separate the fact that I write, teach and talk about the trans world experience, but that in itself does not define my true sense of being.

I have many trans friends and am active in many ways in the trans community, but in my day to day life, almost tall the people who I meet, am friends with, and work with are not trans. Most of these people did not know me before I transitioned, and are surprised to see me as anything but the woman who I am today. I am realizing that five years since my transition, I too am surprised to think of myself as anything but the woman I am today,

For me, it took me five years to reach this point, and I am glad that I reached it. I am happy some of the old lines are blurred. I am a trans person. I can talk about trans topics, and fight for trans rights. But I am a woman. My transness should not and to me, is not the most important thing about me. I hope to think that by being true to whom I really am and living my own true life is what people see and find interesting about me.

I think I have now become the post modern trans person. I wonder what the next five years might bring.

Grace Stevens transitioned at the age of 64 and holds a Masters Degree in Counseling Psychology. She is the author of No! Maybe? Yes! Living My Truth, an intimate memoir of her journey to live authentically. Grace is available for speaking with Live Your Truth: Discover Paths to Improved Performance.