Having hid for so many decades, from both myself and all those in my life, at first the idea of being seen - yes really being seen by everyone seemed to take over. When I transitioned in 2011, my day job in the tech world was on a campus of over a thousand people, and my role did not allow me to be invisible. My evening job as a mental health counselor in a substance abuse clinic was also a place far from transparent. Whether I led with the fact I was transgender or needed to respond to comments or question, over time, I learned that each moment could be a teaching moment.

This did not happen day one for me. No, far from it! There were the comments that triggered me, annoyed me, and even had me questioning everything about my journey. This is the point. The beauty of time is that we can learn, we can grow, and most importantly, we can change.

I knew the day(s) that marked my "transition" to become Grace, I did not fully know who Grace was. I knew who I wasn't, but this was the start of a new journey of self-discovery, and really finding my voice. I chose this path without having any idea where it would lead. In my book, No! Maybe? Yes! Living My Truth I wrote about my time of transition:

In my last blog, I stated that the map is not the territory, and one needs to gain the wisdom of experience to really understand the meaning of this. Having landed on the ground and spending the past four years discovering who Grace is, reinventing and reunifying myself in ways I had never foreseen, I understand the value of this experience more than ever.

As a parent it took me some time to be comfortable with letting my kids have their learning experiences, making their mistakes, and becoming their own person. In some manner I had to take this learning and apply it to myself as a "loving parent" would to the newborn version of me named Grace. I made my mistakes, learned, changed and grew. Most importantly, I learned that this never stops.

The World Professional Association for Transgender Health (WPATH) has published Standards of Care (SOC) that many practitioners follow as the best practices in working with and guiding gender variant people. Although not without controversy, this is the best guidance that is available. There is the concept of The Real Life Test, where it is recommended that an individual live in the new gender for a year before a recommendation for any gender confirmation surgery is provided. It is my experience - both my own and from observing many friends and acquaintances, that this year is of great value in providing a time for self-reflection and really getting to know our new selves. I know that my feelings evolved and changed and certainly had its ups and downs.

This brings me to wonder where Caitlyn is on her journey and perhaps how I would advise her. I do have a map - even though it is not the territory. In 2004 Aaron Devor published a paper titled Witnessing and Mirroring: A Fourteen Stage Model of Transsexual Identity Formation. I have adapted it below.

The time line below shows that Caitlyn appears to be very close to the "transition" event, which is marked by the star. It appears to me, that Caitlyn is at the beginning of the stage of "Acceptance of post transition gender and sex identities." As I believe each of our journeys are unique as are snowflakes, there is no specific time duration as we work through the stages. I have had friends that have gone through various experiences and changes. Some of the comments that I have heard include:

"Well, that was my slut period"

"Well I never was a teenage girl, so what did you expect?" 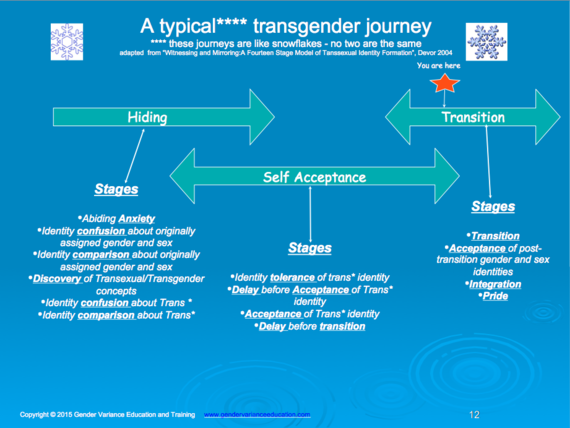 The new "hatchling" Caitlyn is going to take us on a road trip as she explores and discovers her voice and who she is. I expect that she will learn a great deal and make great personal discoveries. I know so many people who have done this - including myself. I truly hope that everyone understand this. Caitlyn, just like each and every one of us is a work in progress. Sometime this is hard for us to admit. Caitlyn may fall, she may trip, she may learn but I am certain she will grow. That will be her journey and her's alone - no one else's.

She appears to be allowing us to watch her go through this. This may be her real courage!

This past February I had the chance to do a corporate training for over 600 people where a co-worker was transitioning. For scheduling it was broken into three 1-hour sessions in a small room with about 200 people in each one. It was both an intimate and interactive setting. At one session, at Q&A, one person stated, "So, you have just spent the past hour asking us to just be a decent human being, right?" I agreed and ended the training there as the teaching moment was complete. 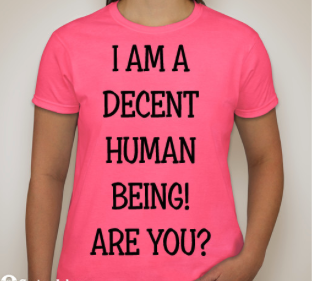 Grace Stevens is a transgender woman who transitioned at the age of 64 and holds a Masters Degree in Counseling Psychology. She is a father of three, grandparent of two, athlete, advocate and author of No! Maybe? Yes! Living My Truth, an intimate memoir of her personal struggle to transition and live her true life authentically as a woman. For more information about Grace, her speaking about authentic living with Living on-TRACK, and how Gender Variance Education and Training can help you, visit her website at: http://www.graceannestevens.com/. Follow Grace on Twitter: www.twitter.com/graceonboard .