She first arrived around Christmas in 2002.

She has never left her place in my bed since then. It has turned into a relationship that I had never expected or planned for. She has been steadfast, happy and non-demanding. She has been with me both before and after my transition, and although she seems to be getting a bit old, and gray, I am pretty sure I would never let her go.

Her name is Tabitha. Even some years later, when I brought her a younger friend to join her, she never complained, and always kept the same smile on her face

I am not certain why I asked for her. It seemed a bit silly for an already mid-fifties man to tell my very new friend one thing that I always wanted, but for some reason I felt it was safe to tell her many things about me that I never, ever shared with anyone. In fact it was only a few months after we picked out Tabitha, that I shared with my new friend my deepest secret, that I cross dress. I was certain that would be the end of this budding friendship. It wasn't and both Tabitha and my BFF "Tessa" are still parts of my life. As I noted in the dedication of No! Maybe? Yes!we found that our friendship was stronger than my changing gender.

Tabitha is a teddy bear. When she first arrived she was pure white. She came a bit less than two years after my marriage ended, and was going thorough an existential crisis on who I was and what would I ever do about all those feelings and compulsions to dress in women's clothes. I was constantly wondering what in the world was wrong with me.

In the corridors of my mind, the question of how could I ever form a relationship with anyone again, was bouncing and banging and all responses had varying levels of pain associated with them. I was in denial for so long, and holding back secrets to others and myself and still had days totally consumed with the fear of discovery. I was nowhere near self-acceptance or any self-understanding that there really was nothing wrong with me. My own battle between isolation and needing connection was often overwhelming.

Tabitha had no answers but she never complained when each night I met her in bed, while wearing a nightgown or breast forms, and reached out and held her tight until I fell asleep. It was not the same as a human touch, no never was, but I always and still find her soft fur comforting.

In the summer of 2010, Tessa and I were on vacation in Chicago, and were on a tour, when we stopped at the Hershey store. It was totally unplanned, when we spied another bear that seemed to cry out for me to bring it home. By this time I had another traveling companion on all my trips, a small stuffed frog named Fergie. By now I was 8 months on hormones but still not certain whether my future included transition. I was in my early sixties, slowly moving forward on a journey that had unknown stops and destinations. Over the years I was acquiring more and more, of what some people would say are toys. I am not sure if I was obsessive, but I never thought of it as a problem. I named the new bear Heshy, and hoped that there would be room for him when I returned home. 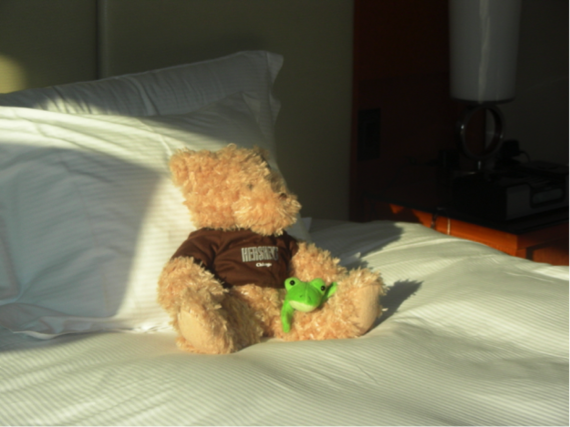 Heshey and Fergie at a Chicago hotel 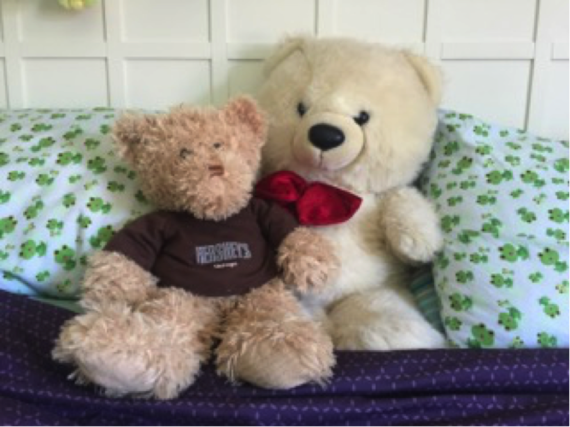 Heshy and Tabitha in my bed

In 2014, Tessa and I went to the Big E - the Eastern States Exposition, and there was a booth from Vermont Teddy Bears. She asked if she could buy me a new bear, as Tabitha was looking old, ragged and dirty. I was floored, angry, and went silent, as so many feelings overwhelmed me. I was "off" the rest of the day, and not pleasant company, as I was trying to figure out why I was so sensitive to this offer of a new gift.

It took me many weeks to calm myself and understand what was the attachment I had to an old stuffed bear, and what meaning this now graying (I could not repeat the comment "dirty") "toy" had to me. At this point Tabitha was my nightly companion for almost twelve years, and to me much more than a toy. It took me even longer to understand that Tabitha was a scared item in my life.

I had found a new friend. I was not totally open and free with her, as I feared the loss of this friendship. I was confused as what to do, and what to say, almost every day, as I was still learning how to touch the various feelings inside of me. I searched to answer what would make me happy. I still am doing this today, although it is no longer something that consumes me.

In my mid-fifties I may have been one of those people who appeared to have everything, yet the simple things that may make life worthwhile were still not apparent to me.

I finally understood, that the act of asking me what I would like, and my answer of a Teddy Bear back in 2002 was the real gift. It was the gift of friendship that I had not experienced before in my life, or if I did, not ever let it in. Even though I changed so much during the next twelve years - with the risk of losing the friendship, that original gift was something that meant more than I consciously understood. In 2012 when the new offer was made from the same friend, and as I now know, an offer of renewal and redefinition, I could not process it that way. No not at all! I was stuck in the past. At the time was I was so desperately in need of a connection and I put all of that into my relationship with Tabitha. By the time of the Big E in 2015, I was ready to see if we would get another bear. The booth was there but as I explored, even though I was in a good place and arrived prepared to buy, at the last minute I realized it was not really necessary.

Tabitha is aging gracefully with me. We both are getting a little gray. I know what she means to me and am ok sharing that with others. I don't think this is childlike, Even if it is, that is ok with me

After all..... I think the following is true. 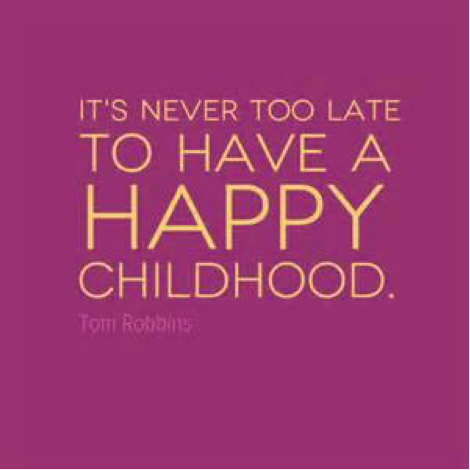