I was excited that she asked..... I wasn't sure if it was OK to put a cryptic invitation out on Facebook, and I know most people are kind of busy on a Wednesday afternoon

My friend Lisa asked if it was OK if she came with me. I asked her why she wanted to come, and she quickly and laughingly responded,

"I want to hear you screaming!"

I laughed too, and then last week, she came with me when I got my second tattoo. I hope I did not disappoint her, as there was no screaming that occurred during the hour it took for the artist to create the masterpiece I named "Frogheart." 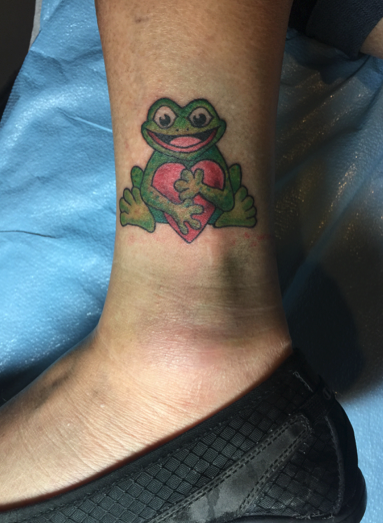 It was only two years ago that I got my first tattoo. I wrote about it in my book....

It was in 2010 when I received a call from Elie, and he asked what I thought if he and Becca were to get tattoos. He was already on the path to living his adventures and truth and told me he was thinking of getting a tattoo of a compass. Being the dad of unconditional support, I told him that if that is what he wanted to do, I would be fine with it. I shared with him that I was thinking of (again) someday, maybe, getting a tattoo. There were a fair amount of parts in me that seemed to be a bit startled as these words left my mouth.

In the early spring of 2014, Elie called and said he was going to get a second tattoo and wanted to know if I was ready to join him and get mine. Finally at this point I really did not need any more encouragement and figured that after all the surgery and changes I have experienced, what would prevent me from doing this? I quickly said yes.

Even though it seems many of my trans friends seem to get tattoos - although this is neither an exhaustive or quantitative survey - I have a different topic I want to share now.

It took me a long time to not only admit to myself that I wanted a tattoo, but actually act on it. I started to wonder if this was much different than the decision to transition and live my truth five years ago. I know there are still many things inside me deeply buried in my internal well of dreams and desires. I still struggle with allowing them to surface and see the light of day.

It is only recently, that I have been willing to go inside and search for that inner well.

I was a little surprised when I first saw her. I watched her for a while as she was pushing a small wagon that appeared to have a bucket in it. I couldn't tell if the bucket was empty or not, as she saw me watching her. Her eyes brightened and a large smile broke out on her face.

She laughed as I heard her say, "I've been waiting for you a long time! Come help me."

Those words and her voice seemed familiar, as if I had heard them before...

She repeated, "Come help me! There are so many buckets to fill. You know they belong to you! Come help me! Here, grab the wagon and let's get to the well." I thought about turning around and leaving as she stared right at me, and found myself talking a step forward. Both of our sighs created a new harmony.

As I pushed the wagon, she asked me if I was OK. I admitted that it was quite heavy and hard to keep pushing it up the hill. She nodded as we walked on. She said she knew this and was doing it for many years. She hoped that things were about to change now. All these years of putting my dreams into the buckets and dumping them into the well may be over, but it was totally up to me.

She shared that I had given her this job a long, long time ago, to be my bucket master. I would put so many of my dreams into bucket after bucket and her job was to take each bucket and throw them into the well of dreams and desires we were marching up to. She said the well was getting pretty full after all these years, and was hoping that I came by to help clean up what was in there and start to pull some of them out. She thought it was about time!

My jaw dropped and I failed to control another voice inside me from taking over and saying, "But I transitioned and am living my truth!"

With kindness, she gently reminds me, "That was five years ago....and it is great that you have come by a few times since then - and your tattoos are great! There is so much more in here that you have been dreaming all your life. It's time to live some of these too. What stops you?"

What stops me? I really did not have a good answer. I looked back at her with a smile that I hoped was saying thank you to her. I walked over and took a look into the well. There were a few things I could make out and some that were not very clear. I think this was going to be some work for me.

She walked over to me with an empty bucket in her hand, and asked me, "Are you ready?"

I was still smiling as I responded. "Let's get started!"