I was thinking how best to welcome in 2016. In the past I have struggled mightily with the idea of resolutions, but I have been toying with the concept that seemed to be on everyone's tongue this past year -- simplifying.

The year, 2016, will mark my fifth year of living my truth, since I transitioned. To me the idea of simplifying was tied very closely to the concept of purging. Like many trans people I have some history of purging all my clothes and accessories and saying never again. I did learn that resistance was futile, and the accumulation had started all over again. However once I transitioned, I evolved, yet there was so much that was still in the drawers that never saw the light of day for many years. I was hoarding my history and I really did not want to face it.

However I could not think of a better resolution for the new year... I started with the unmentionables...

There were the corsets; the waist cinchers; the lacy bras and panties, most of which were never worn. As I rummaged through what seemed to be a never-ending pile of bright colors, softness and lacy trims, the thought, "what was I thinking," briefly flashed through my mind. It was only five years ago, but prior to that there was a fantasy world that was very much part of my everyday being.

Was I ready? Was I really ready to let them go? At last the answer was yes... I really could no longer even picture a day where they would be used, nor did I enter that fantasy world very often any more. Simplify! Yes, I could do it!

Over the five years since I have transitioned, I have accepted the fact that high heels are beautiful to look at but impossible for me to walk in. The few times I do, I say the pain is not worth it. From the foot pain to the sometimes sciatica as my back is pulled out of posture, I have reached the point that I can purge the heels too. I started with the boots.

There were so many wigs and wig stands, and the products to support and condition them. I know I am lucky. After two successful transplant procedures these have become no longer needed and were added to the simplification pile. This one felt really good!

There were two closets that had deep dark corners in them. There was a part of me that knew what was, well, not so much lurking in there, but just binding their time in case of an emergency. I knew the emergency would never ever occur, but... I took a deep breath and went in. 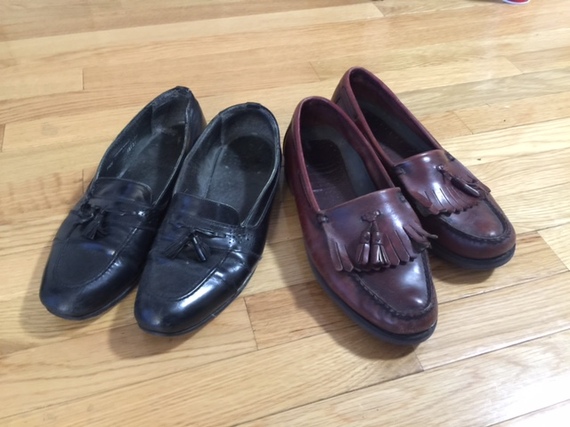 Yes, in one closet there was still 2 pair of men's shoes. In the other closet there were a few men's suits left over from my 2 son's marriages.

I am not certain as to the whys or wherefores, but going in here was a bit harder than even the list above. I could do it, I was telling myself, I could... and I did. They were added to the purge. It still feels a bit strange.

We all know the verse from Shania,
Men's shirts, short skirts...
Oh, oh, oh, I want to be free yeah, to feel the way I feel

My latest purge can paraphrase..
Men's suits, heeled boots..
Don't need them to feel the way I feel
Man I feel like a woman!
...

There is much truth to the old Billy Crystal routine:

When you look good, you feel good!

Now, five years in to my journey of living my truth I have learned that my looking good is so much more than just the clothes I put on each day. Each morning as I groggily make my way to the bathroom and pry my eyes open to look in the mirror I tell myself (even if it is a little lie) that I look great, and that makes me feel good too.

When I pop out of the shower and my eyes are now wide open, I look in the mirror once again. I add one more comment -- and darling, you look marvelous!

There is no better way to start the day.