Suppose you flipped a coin to see if it came up heads or tails. 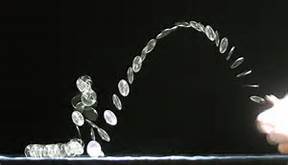 What if when you looked closely at which side is up you could actually see both the heads and the tails side shimmering away so that there was not one single answer?

For those of you who actually might still believe in science, we are learning that this may not be far from reality.

Theories about harnessing atoms and quantum computers have been around for decades.

Quantum computers aren't limited to two states; they encode information as quantum bits, or qubits, which can exist in superposition. ..... Because a quantum computer can contain these multiple states simultaneously, it has the potential to be millions of times more powerful than today's most powerful supercomputers.
- Kevin Bonsor & Jonathan Strickland (How Stuff Works)

Basically the idea is similar to being in two places at the same time. We have seen this idea in many science fiction and even Harry Potter books. Now, scientists and engineers are busily at work learning how to move the theory of quantum computing to become reality.

This entire idea has led me in a new direction, one that is near and dear to my heart and my own experience.

Now, what if that coin, instead of a heads and tails on it represented gender, and had an M on one side and an F on the other?

Or, in other words, what if our entire concept of gender, which has been believed to be a simple and strict binary choice between male and female, actually "contained multiple states simultaneously?"

As I consider this, I hear a few voices in my head.

"Yeah, that's the ticket," one yells out.

"Bingo," another joins in.

A group in the corner of my mind is getting together discussing how that explains everything.

I am pretty sure all of these voices occurred at the same time, so perhaps there may well be the possibility of simultaneous states occurring.

I am now thinking of the quantum of gender.

One of the most challenging concepts to teach and understand is that sex and gender are not the same. The definitions of so many concepts under the transgender umbrella or spectrum are moving and changing so quickly and for so many have great emotional content associated with them. I have seen people within and outsides of the trans community struggle with these. I have presented to therapists groups, and I have seen them struggle with them too. The best I can do is to provide a set of definitions that I use at the moment with many caveats that they are incomplete and highly likely to change. I suggest to be careful about what they read (even here) and store that away as the correct and only way to look at or understand things. I advise that there is no single way, or correct way to be transgender.

When we grow up and store away the "fact" that gender has to fit a binary model while the reality is that so many people do not fit precisely this model, it is at the very least, confusing, and so very complicated. (If you have read this far, I suspect many of you are nodding your heads.)

So, for your consideration, I present to you the idea that we think of gender as a quantum quantity.

The coin of gender has two faces, male and female, but for any individual, traveling through life and time, each of our own experiences of gender may well have infinity of possibilities of the mix of these faces.

Since I have invited you into the quantum realm, we now also consider dear old Werner Heisenberg and his Uncertainty Principle. If we try to stop, take a snapshot of our gender at any given moment, and describe exactly where we are, our description may not quite be correct. To me, I see this as the common everyday experience when it is so difficult to answer the questions that include....

Perhaps this concept can also explain those among us who feel we are non-binary, or gender non-conforming. They may be one step closer to living in the quantum realm.

Who's to say if the quantum of gender is real or not? Those voices in my head continue to like the concept and for the first time seem to have something they can all agree on, so it seems to make sense to me.

Perhaps the quantum of gender like quantum computers will also allow us "the potential to be millions of times more powerful" than the simple, or simplistic binary model has for so long.

This is the power to be just who we are in any given moment, without having to meet someone else's preconceived notion of how we should be.

That is true power, indeed!

Grace Anne Stevens inspires people to find their truth and live their authentic life! She is an inspirational and motivational speaker specializing on intra and interpersonal relationships to improve individual and group performance in all aspects of people's lives. She is the author of No! Maybe? Yes! Living My Truth, and Musings on Living Authentically. Grace is available for speaking to all groups who would like to learn the values of, and how to live authentically. Visit her website at: http://www.graceannestevens.com/. Follow Grace on Twitter: www.twitter.com/graceonboard.