I think I understand why they say that if you want to teach your children a foreign language, it is best to do that when they are very young. Their minds are young and thirsty, and willing to take in all kinds of new ideas, thoughts and language. They look to not only gather these new skills, but love to show them off with an unspoken desire of receiving approval. It is pretty amazing, that if they do not receive this approval, some will stop learning, while some might just stop sharing them with you.

It has taken me a long time to understand this. I'm pretty sure I did not know this when my kids were young, but I am sharing it with my son now, to help him raise his kids.

It seems to me when we learn to stop sharing what we learn, a few things can and often do happen. We may get stuck in our ways, even though the world may change around us. We may decide that sharing is a bad thing to do, and we need to protect ourselves, and what we "know" as we may fear or dread what others may say or think about us.

As you know, I spent decades hiding parts of myself and having beliefs that I couldn't share for fear of being told there was something wrong with me. I had many ways to protect what I "knew" and had little room to learn something new.

Being transgender, I knew I was not a boy, and it was very clear that something got severely mixed up as I was on the wrong side of the binary divide of male or female. I have already shared many details of my journey, but I, like so many people grew up with (what we know now) the simple view that people were either male or they were female. The world was binary, and I was just in the wrong box!

It was eight years ago when I, at last decided to find others like me, and five years ago when I was strong enough to "switch" the box I was in. I thought I knew it all, and was glad that I found others like me. My brain had that binary language in it for over 60 years....there was male and there was female. Why would I ever need to learn something new? It helped me find out where I was "confused," and what I needed to do to reach my own internal peace, acceptance and respect.

Once I entered and became active in the trans community I met people who were saying that the binary male and female did not fit for them. I admit that this was challenging for me to understand and it was easy for me to ignore and reject the idea at first. Some of these people called themselves gender queer, and some called themselves non-binary. These were names and labels I did not understand, as I was personally wrestling with the labels of transgender and transsexual (which so many of us still are too.)

As I met more of these people I found that I was willing to listen to them. Some told me they did not feel that they could fit into either the male or female category or label. Some told me they sometimes feel male and sometimes female, or that there sense of their gender is fluid. At first I found this hard to follow. But then I started to ask myself how I even knew that I was not male but female? I found that I could not articulate in any meaningful way, but yet, I knew, and knew my truth absolutely. I wondered if what I "knew" about the binary may not have been correct. I wondered if how I "knew" what was right for me, might actually be similar as how these people "knew" who they themselves were. I wanted people to respect me for living my truth. Was it a big leap to respect those who say I do not need those binary gender boxes, or I like to only visit them but not make a full time home in only one of them?

I learned that they really were not much different then me, in they were only trying to be themselves. It has been hard enough for me to find the box that I fit in, but for my new friends, they are rejecting the boxes I have been comfortable with and perhaps creating new boxes.

We humans like our boxes, and our labels. We have a need to use this to know where we fit in, and perhaps find others like us. I get this, and still there are times I struggle with it. Now that I have learned to not be silent, and share, and learn from others each day, I am finding the good and the bad with boxes and am getting OK with the complexities.

For many of those who find the binary gender labels to not resonate with their own sense of self, there has been and is an ongoing search for pronouns to not signify the binary construct. Over the past few years, there have been many new terms created and used. Many are now using the pronoun "they" in as a singular usage rather than the binary of he or she.

In January 2016, the American Dialect Society chose the singular use of the word "They" as the word of the year.

The use of singular they builds on centuries of usage, appearing in the work of writers such as Chaucer, Shakespeare, and Jane Austen. In 2015, singular they was embraced by the Washington Post style guide. Bill Walsh, copy editor for the Post, described it as "the only sensible solution to English's lack of a gender-neutral third-person singular personal pronoun."

I know that for most people this will not be easy to learn, because so many of us have been so set in our ways of a binary model for all of our lives. It is still a bit hard for me, but I am learning to build a new box. 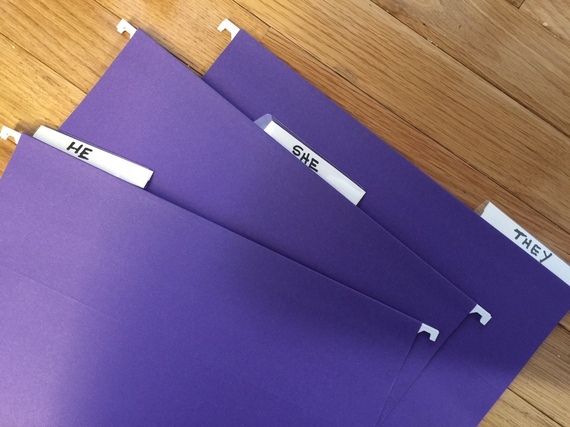 After all, why can't I respect each person to address them they way they want to be addressed? We are all different and unique. The world is changing around us, and it is OK to learn something new.

It is not really about gender, or gender binaries. It really is about respect for each other.

"They" deserve your respect too!

Grace Stevens transitioned at the age of 64 and holds a Masters Degree in Counseling Psychology. She is the author of No! Maybe? Yes! Living My Truth, an intimate memoir of her journey to live authentically. Grace is available for speaking with Live Your Truth: Discover Paths to Improved Performance. Visit her website at: http://www.graceannestevens.com/. Follow Grace on Twitter: www.twitter.com/graceonboard .