Is it really less than three months since Diane Sawyer's Jenner interview aired? So much has happened in the past three months, including the world's introduction to Caitlyn Jenner. It seems that there is not a day that goes by without not one, but multiple mentions of Caitlyn in the media. Some days it is as simple as what she is wearing, some days it is a new trailer for the not-yet-started reality show, some days it is new blog that she has written and on some days it can be all of this.

On July 15, she will also be seen on ESPN as the recipient of the Arthur Ashe Courage Award on the ESPYs. To me, it makes no difference if you are a fawning fan of the Jenner juggernaut or are fanning yourself from Jenner fatigue; Caitlyn has created an awareness of gender variance far and wide in a manner never before seen or even dreamed about. Perhaps the legendary athlete is still dreaming of setting new records, which may well be what she knows how to do best!

I have been thinking a lot about the idea of giving Caitlyn an award for courage. She is certainly neither the first, nor will she be the last, transgender person who will come out and transition, whether publicly or privately. Each and every one of them has exhibited the very same courage that Caitlyn is being awarded for. The day I returned to work when I transitioned, there were dozens of people who came to my office to tell me how brave and courageous I was. This became increasingly difficult for me to hear, as not for a single moment did I feel brave or courageous about transitioning. I felt I had no choice if I wanted to find any internal peace. I am pretty sure that Caitlyn must have had similar feelings -- almost everyone I know in the transgender community has shared something like this.

The only way I can make sense of this is that this award is not about Caitlyn. Caitlyn is actually a symbol, and a larger than life symbol at that. Almost 40 years ago. Jenner was a record-setting Olympic champion, becoming a symbol of American sports dominance, so perhaps this will be familiar territory for her. Her history leads me to believe that the symbol status she obtained in the past was undertaken with some reluctance. With her Vanity Fair photo shoot, I suspect this has now changed.

I myself am just a few years older than Caitlyn, and transitioned four years ago at the age of 64. I understand the excitement. I remember my shopping spree before I returned to work, and the semi-planned fashion show I was performing in each day for the first month (or more) of my transition. For the past six years, I have been a board member of The Tiffany Club of New England, one of the oldest transgender support groups, and have been meeting and supporting many people on their gender variant journeys -- where no two have been the same.

As a college student back in the '60s, I remember the discussions about Marshall McLuhan's teaching that "the medium is the message." In his classic book, Understanding Media: The Extensions of Man (1964) he proposed that a medium affects the society in which it plays a role not only by the content delivered over the medium, but by the characteristics of the medium itself.

In our present day world of "instant" communication, could it be that Caitlyn Jenner has become a "medium," as we have witnessed that just a single cover picture of her has seemed to have a huge impact on our society? Has she once again become a symbol, just as she was 40 years ago, and again the content has perhaps less meaning than even she desires? I can feel for Caitlyn, I can empathize for her, as I have myself walked in her shoes. I know the shame, the fear, the confusion of hiding for so many decades.

For most of us, the time of transition is the deeply personal work of rediscovery and reinvention. It is hard enough to do it in private, as these discoveries are often not quick in coming to our awareness. Doing this in public takes either a certain courage or bravado, and I sincerely hope that in Caitlyn's desire to "do good" it is the former.

I have shared with my friends that after almost 50 years, I have been re-reading Frank Herbert's masterpiece, DUNE. (For those not familiar with the book, the hero is a young man who becomes the hero, the messiah figure, also know as Muad'Dib -- the one who points the way.) Here is a quote from it that I believe is worth sharing: 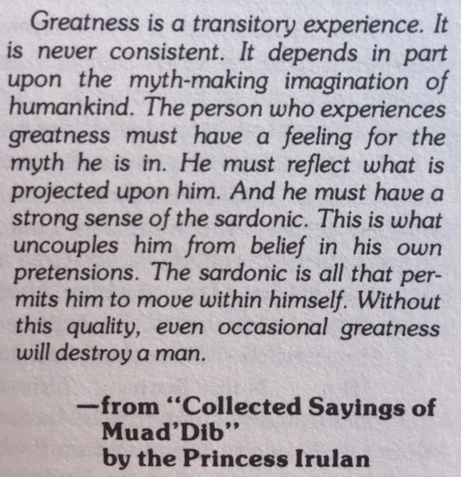 The hero may be the leader we desperately want to follow without doing our own work. The symbol is what makes us go inside to question what and who we really are.

I am not certain what role Caitlyn fulfills for each person, whether they are trans or not. My hope is that she allows each person to go inside and question who they really are, and help to inspire each of us to be the hero of our own life!