I know we've come a long way
We're changing day to day
But tell me, where do the children play?
- Cat Stevens

It was early Friday morning as I entered my car and held down the home button on my phone. The familiar message "What can I help you with?' appeared, and I spoke into it, "Directions to ESPN, Bristol Connecticut." The day's adventure had begun.

I met Stephen Alexander a little over a month ago and he graciously invited me to attend a panel discussion he was going to be on at ESPN on Transgender athletes. I was a fly on the wall as I got to meet some amazing and great people who were sharing their stories with ESPN's internal employee LGBT group, which was also internally broadcast within the parent Disney corporate world. The title of the discussion was Understanding the T: Transgender Athletes and the Challenge to Compete.

ESPN's Christina Kahrl was the moderator of this panel which included:

It strikes me that we see and hear about someone in the trans community on a daily basis. We hear the good stories, the sad stories and the outrageous, sensationalized and indescribable stories. It is easy for many to lose sight that transgender people are first and foremost just people, each trying to hopefully live their best possible life, without a burden of being defined by being transgender. I continue to say that we are all so much more than just gender.

Recently, when Janet Mock appeared on Oprah's Super Soul Sunday program, she stated, "For most people the most interesting part of me is my transness." This conversation was about her willingness to "own" her "transness" in order to make a positive difference for others in the world. For the athletes above, their discussion points out that their transness, which is their authenticity, has blocked them and so many other trans people from being involved and playing, competing in sports as who they truly are. Each of their stories and experience is unique. As such each is an important building block to help all people learn that transgender athletes hold no special advantages and are just people trying to live, work and play like most of us desire to do.

By being in the audience this was a time for me to have many learning moments as I listened to the participants. Here are some of the comments I heard:

Chloe told the group that she never thought of herself as being transgender. She was just female, period. She said she transitioned at the age of 16 and was never an athlete until she got into competitive Crossfit a few years ago, and was "outed" by the organization's refusal to allow her to compete, as she was not assigned female at birth. She shared it was never her intent to be public or an activist but in order to stand up for her rights and those of others. Chloe appeared to know this was important but it was clear that her primary goal was to just live her life. At this point in time, her "transness" has blocked her from her life's passion.

Chris shared that prior to his transition when he was competing in women's triathlons, he never felt he belonged, as he did not feel like a woman. His personal challenge was to believe he could compete in his passion if and when he transitioned. Not only was he be able to compete but he has now become a member of TEAM USA. However, there are still many rules that may hold him back at competing at the highest levels of his sport. He reported than one goal of making the team has been achieved but there are still many blocks in his path to compete, as he desires. He told us it is not the winning that matters; it is the chance to perform that is important. I was able to relate to this from my experience as a coach of little league sports for many years.

Stephen has proved to perhaps be the prodigal son, and shown that one can go home again. Prior to his transition Stephen had guided his high school's girls teams to multiple state championships, and now post transition he has returned to that very same school and coaches five different sports. Stephen is putting himself on the line each and every day and makes a difference to others by guiding, listening and teaching teamwork as his passions and goals. Stephen said that there are still people in his community, in the schools who hold his "transness" against him, but progress is being made day to day.

As an ally to the T community, Wade Davis taught the audience, including me, that being an ally is not a passive role. He said, "Allies need to take ACTION." They need to speak and be heard. He also said, when you do not know about someone or his or her life, there is only one thing to do, which is to listen. This will lead to learning and acceptance, not judgment and denial.

Jazz Jennings and her mom shared a variety of stories of the battle to allow Jazz to paly competitive children's soccer and now high school tennis. It appeared that nothing was ever easy, but this family never gave up, and are an inspiration to us all. 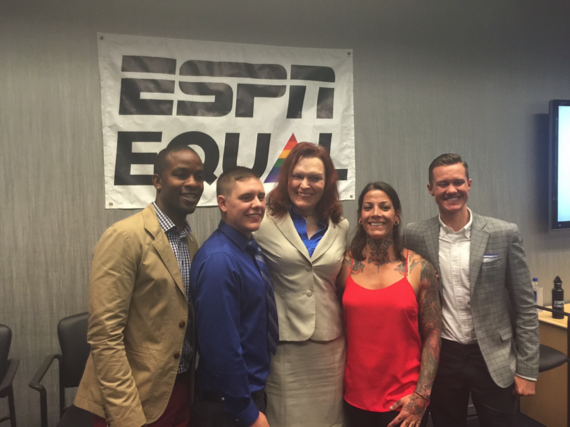 During Q&A and a question regarding the advantage of transwoman playing women's sports, I was able to relate to Christina's personal experience when she shared, " I have been on HRT for 13 years now, and I cannot even open a jar. Why did they ever invent jars anyway?" I myself being on estrogen for 5 years get it. I can barely carry the grocery bags up the stairs now. I wouldn't have it any differently.

The bottom line: From childhood through colleges, all amateur sports and even on to professional sports, the rules for allowing trans people to belong and perform are inconsistent at best, and outlandish and ignorant at worst. Sports are a must for so many of us to keep our heads on straight in this increasingly complex world. For trans youth, they must be allowed to play and play equally and not singled out. Panels like this are just a start to point this out. There is still much work to do. We need to know where will the children play!

There is another Cat Stevens song that leaves me with some hope.

'Cause out on the edge of darkness
There rides a peace train
Oh, peace train take this country
Come take me home again