It was my first time being away from my young son for an extended period of time. I was attending a conference in Texas, and since my attorney husband often works late, we took my parents up on their offer and sent JJ off to the "country" for some Grandma and Grandpa time.

We met midway in a strip mall parking lot. As I handed my napping, then-18-month-old son to my mom, I choked out, "Take care of my baby boy," before cry-laughing at myself, then giving them both a big bear hug. He was in the best of hands, but I was having some major separation anxiety, and more than a little guilt for going off to the real country for almost a week.

"Design Ranch" was a conference set in the Texas hill country, about two hours west of Austin at picturesque Waldemar Ranch. It was like something from a vintage travel postcard: stone lodges with massive cedar-beamed ceilings, campfires under the stars, kayaking on the North Fork Guadalupe River. It was quite the homecoming.

I had lived in Texas as a young adult for nearly 10 years, much of which was spent trying to cure myself of being gay. The Lone Star State holds some less-than-savory memories for me, yet I knew as soon as I drove up the dusty road to the ranch that I was in for a memorable week.

"Design Ranch" is unique in that it truly delivers on the "hands-on" experience many conferences tout. Sessions included letterpress printing, lariat lessons, even constructing a lamp from a log. One in particular that caught my eye was "How to Write a Country Song."

It was led by a writer from Dallas, who encouraged the dozen or so of us in the group to draw inspiration from our personal lives, things we were passionate about. Several wrote about relationships, some about their love of design, and others griped about difficult bosses. But my mind quickly went to my boy, whom I was missing something awful. I pondered how a little kid with two dads might have trouble fitting in, not just in the imaginary world of a Country & Western song, but also in terms of what he might encounter in the real world.

The familiar playground boast "my dad can beat up your dad!" came to mind. I laughed aloud as I imagined my son defending his "modern family," proudly announcing, "Well, my two daddies can beat up your one!" And there was my title.

As I scrambled to add lyrics, I kept in mind the provocative title, wanting to ensure the overall message was positive in its assertions of double daddy-dom. And I was careful to never disparage the less-fortunate "regular folks" in mom/dad families.

The workshop was only a couple of hours long, so after sharing the title and a few lines with the group (they were met with equal amounts of laughter and intrigue), we were released to finish on our own during the remaining time at the ranch.

An old porch swing set on the side of a hill with a view of the river provided the perfect spot to get my muse flowing. Thoughts of my son and the setting fueled my inner Willie, and "My Two Daddies (Can Beat Up Your One)" was born in no time. I knew I'd written something special -- certainly to me, if to no one else.

I already had a tune percolating in my head on the flight home, and soon thereafter, I contacted a songwriter friend to help me out. The music came almost as easily as the lyrics, and after a couple of sessions, we had ourselves a bona fide country song.

Over the last year I've performed "My Two Daddies" in a talent show (winning the Judges Award), recorded it in a studio, and even heard it played on an independent radio station. Many have said how great it is that I wrote the song for my son, and how special it will be for him when he's older. But if I'm totally honest, I wrote it just as much -- if not more -- for me. I wrote it to protect my son from any future persecution he might get for the family he was given, and thus assuage my fears and guilt. I wrote it to convince myself that I am worthy of being equal, of being respected, of being a parent. I was still coming into my own as a father. And although I've overcome many insecurities, I doubt I'll ever stop questioning my worthiness to be this wonderful boy's father. 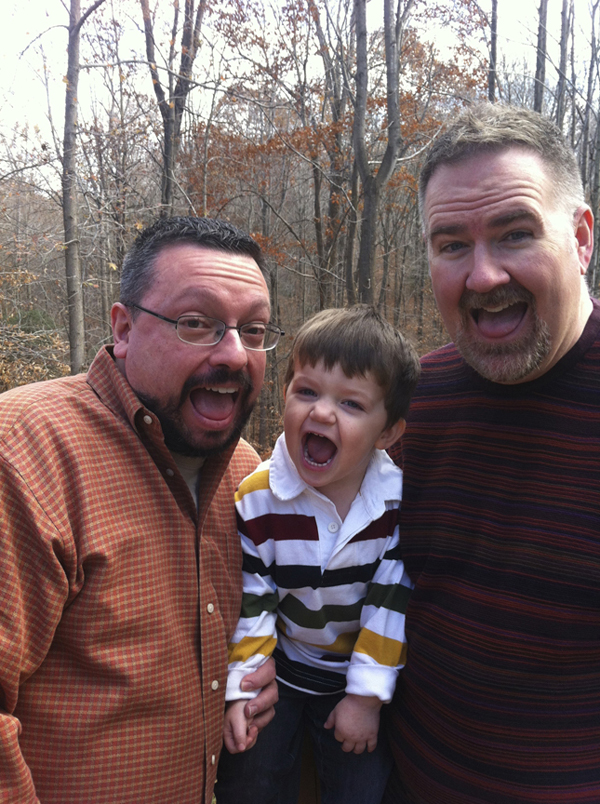 Just after Father's Day we're travelling across the country to visit JJ's birth parents. As an open adoption, this is part of what we signed up for, and it's a trip we've made annually since his birth. Yet this is the first since telling him (albeit in very basic, toddler-friendly terms) who and where he came from. Interacting with JJ's birth mom always has its challenges. While many are external, some lie within my own doubts and fears. What if he wants to call her "Mommy"? What if they share something special beyond what he has with his Papa and me? What if we're not enough for him? What if he resents having two daddies? 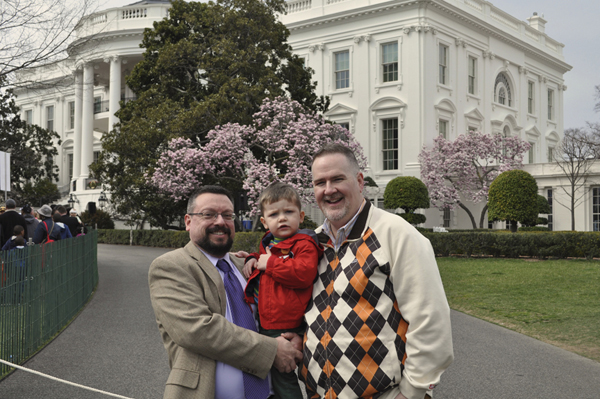 I've come to understand I can't give voice to the "what ifs" or control the thoughts or feelings of my son or his birth parents. And I certainly can't go around beating up anyone who might tease my son for having gay dads. What I can do is stand by his side, with Papa on his other, and be his daddy.

For the D.C. Pride parade just this past weekend, JJ sported a "My Two Daddies" T-shirt, while Papa and I wore "Daddy One" and "Daddy Two" shirts: 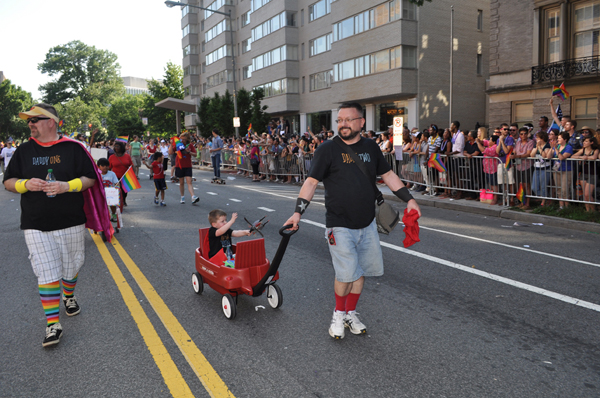 The warmth and enthusiasm of the thousands lining the streets was overwhelming at times. People certainly noticed the shirts (and the rainbow socks I was wearing), but hopefully they also saw a happy and hopeful family, a little boy holding the hands of his two daddies, ready to take on anything life sends his way. 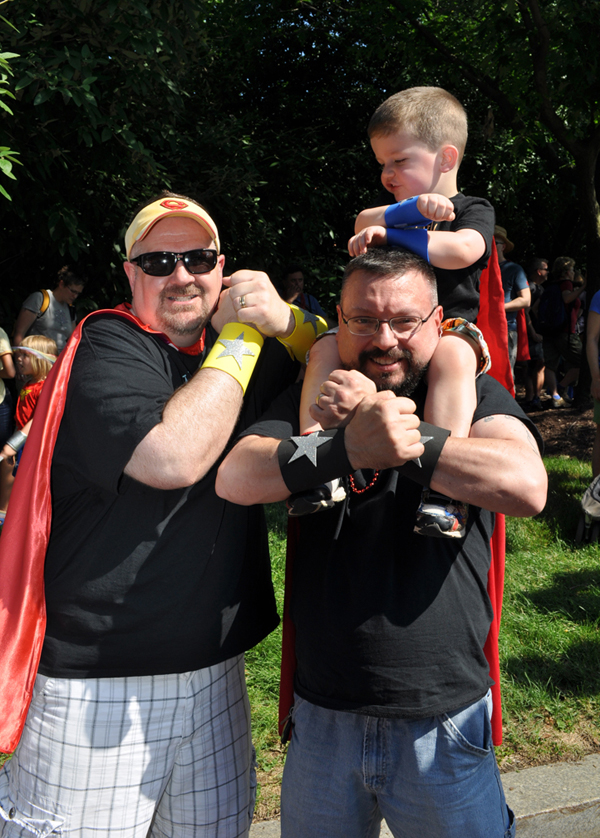 "My Two Daddies (Can Beat Up Your One)"

It's not because my ears are big,
Or that my skin is green.
It's 'cause I got the two best daddies
That you've ever seen.

Verse 2:
Now y'see, most kids got a mom and pop,
And that's just fine and dandy,
But having me two awesome dads
Comes in pretty handy.

I got the nicest clothes in school,
And I've been to Paris, France,
So all them kids with regular folks,
Well, they don't stand a chance.

Chorus:
So ya better think twice 'fore pickin' on me
And thinking we're not a real family.
I'm the luckiest boy and a fortunate son.
My two daddies, my two daddies
Can beat up your one!

Verse 3:
I got one dad to teach me ball
And take me fishin' at the lake.
I got me another who bakes a pie
Better than Martha makes.

You say your daddy's big and strong,
And that he's 6-foot-4.
Well, you put my two dads together,
And they're about 6-foot-more.

Chorus:
You better think twice 'fore pickin' on me
And thinking we're not a real family.
I'm the luckiest boy and a fortunate son.
My two daddies, my two daddies
Can beat up your one!

Bridge:
Don't you worry, don't you tease.
Just keep your feathers and your tar.
I hope I grow up to be half the man
My two daddies are.

Verse 4:
Now some folks may get fretful
And not understand my life.
Well, y'see, my parents love each other.
There just ain't no wife.

I never did get breast-fed,
And no one sits down to pee,
But we all wear the pants in our house,
And we're as happy as can be.

Chorus:
Oh, you better think twice 'fore pickin' on me
And thinking we're not a real family.
I'm the luckiest boy and a fortunate son.
My two daddies, my two daddies
Can beat up your one!

You better think twice 'fore pickin' on me
And thinking we're not a real family.
I'm the luckiest boy and a fortunate son.
My two daddies, my two daddies
My Papa and my Daddy, my two daddies
Can beat up your one!