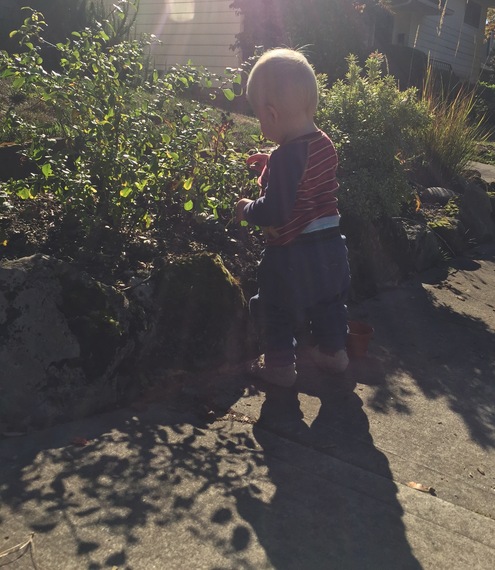 My youngest, my baby, is now 19 months old. Being the baby, and being babied, he has had the luxury of hanging back a bit, of letting others do things for him. He is unhurried. He is demanding. He is a cross between a surfer and a despot. Pulling a pacifier out of his mouth with one hand, idly waving the other toward a book, "Dat," he will calmly demand, as his siblings fight over who will get to bring it to him.

His relative laidback-ness (at least by our family's standards), has meant that he has lagged behind his siblings in hitting milestones. After what seemed like a long time with only the key words in his arsenal, his language is starting to blossom. He reached the point a month or so ago when he seemed to realize that everything is called something -- "DAT! DAT! DATDATDAT!" He will not be appeased until everything is named. "Shadow. Truck. Leaf. Shadow again, yes, shadow." He is starting to put words together. "Oh no, stuck!" "No brother!"

His walking, especially, has been lagging. Some of this is due to his lack of concern for the feat, but it has probably been exacerbated by his having to be carted off everywhere at a moment's notice. He has had a life of being picked up and stuffed in the car seat, the Ergo, the stroller as we tick through the day's responsibilities. Sibling drop-off and pick-up; grocery shopping; an occasional jog.

For a long time, I was pretty happy about the whole no walking thing. When he turned a year and was still a crawler, I was thrilled. "He's our third," I would joke to my friends. "I just gently push him back down when he tries to stand up."

When he turned 16 months, and was still only taking the occasional step, I stopped joking though. I began encouraging his walking with an enthusiastic "You did it!" whenever forward momentum was achieved. He soaked that in, milking it for all it was worth.

One time he stood in front of our large living room window, the sun backlighting him in his diaper and shirt. He free-stood, surveying the mood of the room. "You can do it!" I encouraged him. He looked down at his toes, noticing his shirt for the first time. "Ehhh, ehhh," he complained, ineffectually pushing the shirt away from his skin. "Oh, you want that off?" I asked helpfully, coming over to remove him of his burden. He was momentarily appeased, still on his feet, until he noticed his diaper. "Ehhh, ehhh!" he complained again, making half-hearted motions to rid himself of this further impediment to his athletic prowess. "No no, we have to keep the diaper on." He accepted this, and stood poised to take a step until he noticed the sun behind him. "Hot! Hot!" he exclaimed, waving his hand frantically in front of his face. With a sigh, I shut the blind. Conditions perfect, primed to go, he took one step, sat down, and gave himself a big round of applause. And so it went for another few months.

By 18 months, the nigglings of worry started to set in. I initiated a baby boot camp, where he would push his little toy shopping cart or train around the block to get surer on his feet. It didn't take long for him to get more confident. And while he is still not what I would call a "walker," (he still highly prefers crawling, it's so much faster) he can now walk across the room without too much trouble, should he be feeling adventurous (and should all the conditions be right).

Even though he is a more able walker now, we have kept up with the baby boot camp. It is one of my favorite parts of the day. Now that I am no longer working outside the home, I have the luxury of setting aside an hour or so each morning -- after the kids are dropped off and before any errands need to be run -- to roam free, with no straps or buckles to tether us down.

Often, we don't make it around the block. Today we didn't. He pushed the shopping cart from the side of the house to the front of it, then stopped. He noticed an empty plastic herb container and set about filling it with the treasures of a toddler. A rock, several leaves, a flowering weed, a twig. He would show me each, asking its name or occasionally telling me first. He smelled a flower, throwing his whole body into it, then extended it to my nose. He showed me how to sniff deeply. I did. Into the pot went the flower. He chose carefully, considerately. Then he would decide that was enough, dump it all on the ground and start again.

I sat behind him, luxuriating in a patch of sun like a cat, feeling profoundly thankful. That I am fortunate enough to be able to be here, watching him. That he is healthy. That he is unhurried.

After a few more minutes, he abandoned the container. "Eeet?" he asked, pointing to his mouth. I nodded, took his hand, and we walked up the driveway back home for lunch.