NOTE: This is the English version of this blog post. 99 percent of my blog audience is in China and reads my posts in Chinese. Given how Chinese parents look to their one child to reflect and shape their own social standing, I'm curious to see how they'll react to my new essay about a transgender 4-year-old.

Dear friends, I hope this note finds you well, peaceful, at ease and happy!

It's been over a year since I've updated this blog. I'm writing now to give you an update on me, and also to share with you a recent experience which touched my heart.

I'm blessed to have two movies in development, one with Wanda Media based on my book Do Not Marry Before Age 30, and the other a romantic comedy with Alibaba Pictures. I'm also working on a novel about a female hacker from Beijing who comes to the United States and gets caught up in the reelection campaign of a corrupt Los Angeles Mayor. These projects are so much fun! I'll keep you posted as they evolve. 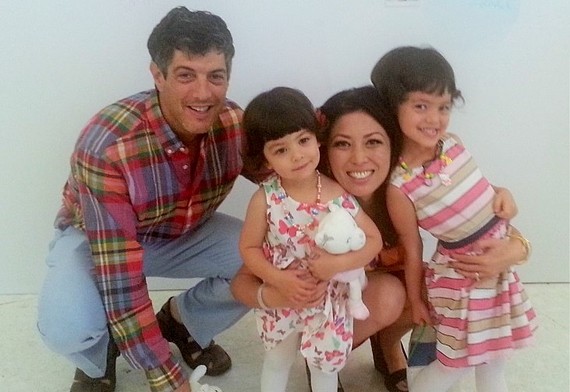 I'm grateful for every day with my darling Dave. We relish family time with our daughters, who now are at the super-cute ages of 6 and 5. My tennis game remains a source of fun and massive opportunities for growth. I have yet to win a set against my 76-year-old mother-in-law, but it's a goal that someday I may reach. 🙏

Recently in our circle of friends, something happened which made me stop to consider that subject which inspires all great movies and novels: that is, what it means to be human and how to find joy in our lives.

I felt this incident worth discussing among friends, so I've written about it below.

What I learned from a transgender 4-year-old

Last week, a mother emailed our community of friends to say:

Our son often dressed in his sister's clothes. We thought it was a phase. But recently, he has become insistent that: He is a GIRL. After lengthy discussions with our family and our counselors, we have decided to respect our child's wishes. Going forward, we will refer to her as a girl and will call her by her chosen girl name. We invite you to join us in this journey.

I read this and thought: Really? I didn't know a 4-year-old child could be transgender!

Gender is so essential to our identity, it's the first thing we notice when we see someone.

One of the most famous gender-benders in American pop culture was "Pat" from the American comedy TV show Saturday Night Live, also known as SNL. Since comedy is so difficult to translate, SNL is not well-known in China, but it's America's longest-running television show, having run continuously from 1975 until today. It's so central to American culture that their devastating satire of VP candidate Sarah Palin resulted in a massive 16-percent drop in Americans considering Palin qualified to be President -- a change that may well have resulted in Obama's becoming President.

The gender-ambiguous "Pat" character was featured on SNL during the 1990s and still is often raised anytime one speaks about gender in America. The name "Pat" can be short for the female name "Patricia" or the male name "Patrick." Pat has short hair, wears thick glasses and has a body the shape of a potato.

In a Hollywood dominated by the beautiful and the skinny, Pat commits the unforgivable sin: he -- or she -- is fat and ugly. This translates into the fact that nobody actually likes, respects or even cares about Pat. But everyone -- inside the show and us watching -- takes one look at Pat and immediately, urgently, needs to know: What IS Pat?

Each SNL scene featuring Pat had a celebrity guest star playing someone who meets and tries to figure out whether Pat is a man or a woman, without being so rude as to actually ask. Pat, oblivious, endlessly frustrates everyone with answers that leave his/her gender vague.

PatFrom the mid-1990s until today, Pat has reigned in American pop culture as the ultimate symbol of gender ambiguity. Bring up the name "Pat" among Americans, and you may get a chuckle and the question: "Is Pat a HE or a SHE??"

What was so funny -- and groundbreaking -- about Pat is that ultimately the joke's on us, the viewers. Something deep and powerful within us wants to neatly categorize everyone we meet into boxes that we understand.

Outside the world of TV comedy, that something deep and powerful can result in hatred, abuse and even murder of people who don't conform to those boxes.

Here in the States, in the past 5 years, society has shifted markedly in favor of acceptance for gays and lesbians to marry and peacefully live their lives. Next, I hope that as a society, we'll learn to accept and respect all people regardless of their gender identity.

To be honest, I'd not previously given much thought to the question of gender identity. I'd never personally known someone who is transgender. But upon receiving this letter, I wanted to figure out the best way to think about this issue, and I wanted to learn how best to explain it to my own two girls, ages 6 and 5.

So I did some research on the subject. This is how I see things now:

Be your best bold self

When I think about our family's little friend, and now when I think back to Pat, I see people just trying to live their lives in peace, without harassment and with the dignity and respect that every human being deserves.

I want to live in a society which values each human being and which is ruled by love and empathy instead of hatred and cruelty. Don't you?

Talking with my daughters about our little friend's transition turned out to be surprisingly easy. First we talked about how being a friend means appreciating our differences. We talked about how my girls are different because they look white but actually are half-Chinese and speak Mandarin. Then we talked about how their friend is different because she's realized that she is a girl with boy parts. My older daughter commented that their friend actually is very special because very few girls in the world have boy parts. I asked if they had any questions or wanted to talk about anything. Their only concern was that they might accidentally call their friend by her old boy name. I said I thought their friend would understand, but they should create a habit of using her new name.

The year I spent writing Do Not Marry Before Age 30 was a great gift to me. It gave me the time and space to seriously consider: What does it mean to be a woman today? Here's what I concluded: Being a woman means learning to become our best bold selves. And that is a lifelong process.

I'm proud of our little friend the 4-year-old girl who is struggling to articulate to herself and to the world exactly who she is and what she needs to be happy. Many women decades older than she still haven't learned how to do this. I'm proud of her parents for supporting her to be her true self.

I hope that as this little girl grows up, over time she will be surrounded by pop media which dignifies people who are different from the straight, white, male movie idols we're used to celebrating on-screen. I want to watch media which reflects the sensational diversity of the people who inhabit our planet Earth.

Perhaps a quarter century after Pat, we'll start seeing on-screen the beauty of people across the gender spectrum. And perhaps that beautiful new media will help drive away hatred where it exists in our society.

Well, nothing great ever was achieved without first dreaming BIG.

Joy Chen (en.joychenyu.com) is a Chinese-American former Deputy Mayor of Los Angeles and author of the best-selling book