For me, traveling to the Olympics with the Presidential Delegation proved to be the way to go. Even when I was on the Olympic team, I didn't have the same kind of access or ease in getting around. We traveled around in an armored vehicle. Even so we were subjected to checks. At one point we were in the official van on the way to Slope Style, a new event in the Olympics, and our security detail was in the front seat. We had driven all the way up to the mountains to where the Slope Style event was taking place, when the Russian security guard at the entrance stopped us and said, "We need your credentials."

Now, in Sochi, you guard your credentials with your life because they're your pass to everything. The driver, it turned out, had forgotten his credentials. I heard the security guard say, "Step out of the car!" He did and that was the last we saw of him.

When one of the Russian bodyguards for the Ambassador got in later, I asked him, "What did the security guard do with our driver?" He just said to me, "It's been taken care of." I was thinking: Poor driver! We thought we were going to pick him up on the way back, but we didn't stop at the same gate. When we asked what had happened to our first driver, they wouldn't tell us. It seems he was sent down the hill in another car. We were joking about it, because apparently the driver was fine, but that gives you an idea of the atmosphere at Sochi. 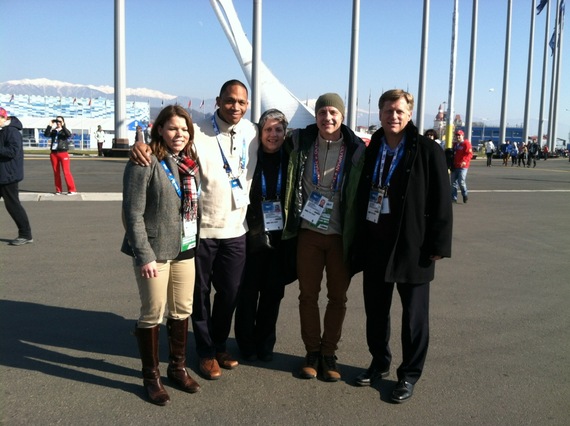 One of the most interesting events I attended was the U.S. versus Finland women's hockey game with Caitlin Cahow. As the game unfolded she explained what was happening, what the team was thinking, how the women approached the event and what a hockey player has in mind during the game. It made for a fascinating event.

Next we went to long track speed skating. It was beautiful. The ice was like glass, and the athletes were so powerful, traveling across the ice at 25 miles per hour. It was just gorgeous. Later we went to the figure skating events, and I was able to do what Caitlin had done earlier for the Delegation. I took them through the ropes, explaining what to look for, what was working, and what was not.

One of my most anticipated moments was the Delegation press conference with the World Wide Media. It took place our first morning from the hotel where we were staying. We didn't know if we'd have any Russian press there because the Russian press was censored. We were happily surprised to find some liberal Russian media represented in the crowd.

After the press conference, we stood in a line and accepted questions from any and all press. Then we individually did one-on-one interviews. Most of the questions that were posed to me were about Obama's message. I felt that as a visitor in a country, I should show respect for that country. So I said, "I'm proud to be from a country whose President supports diversity and tolerance, and I'm glad to be here for that reason." Everywhere we went, people knew our message, and they were congratulating us. It was amazing: everyone in Russia knew exactly why we were there, just as everyone in America knew why we were there. President Obama said in his opening statement at the Olympic games that the White House thought it was one of the most important delegations ever put together because of the message of inclusion and tolerance for all people, gay and straight. As part of the Delegation, we all tried to deliver that message in a subtle, tasteful and good way. 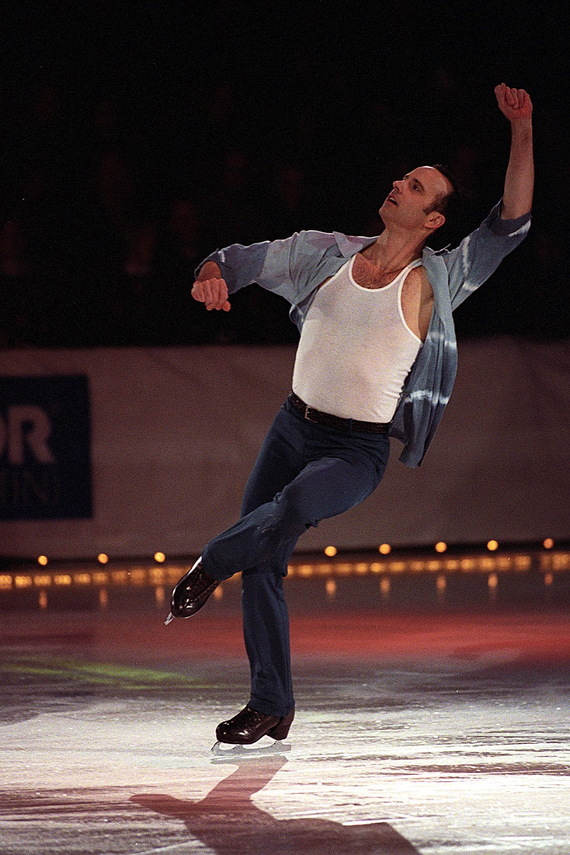 Meanwhile, Caitlin Cahow and I had been nervous about coming to Sochi and just stepping off the plane. We never realized this until we were on our way back. We found we had that and much more in common. We had great chats and became such close friends that other members of the Delegation joked that we were a couple, saying, "Were you guys just pretending to be gay to get on the Delegation? ... Are you getting married?"

Caitlin is a fantastic spokesperson: on-point, calm, smart -- a great person to deliver a message. And what can I say about Janet Napolitano? She is just fantastic. That being said, I really missed being able to share the experience with Billie Jean as well. She's such an inspiration and a strong woman. I was terribly sad for her when her mother passed away. It was good to meet and spend time with the U.S. Ambassador of Russia, Michael McFaul and Rob Nabors from the White House. It was a diverse group of people, and it couldn't have been a better combination.

What is the upshot of all this? One of the speed skaters I spoke to said, of the gay rights advocacy issue, "It's not important because it's going to change in Russia. I can feel it." I personally feel the Sochi Olympics were an important step and that things will change ... if only because I believe that the International Olympic Committee will never again select a host country that is not tolerant and that does not support human rights, and that in itself is a next step. In addition, the president of the IOC made a speech at the Opening Ceremony saying that the Olympics is a place to test sports prowess, not a place where discrimination issues should be forced to come to the forefront. 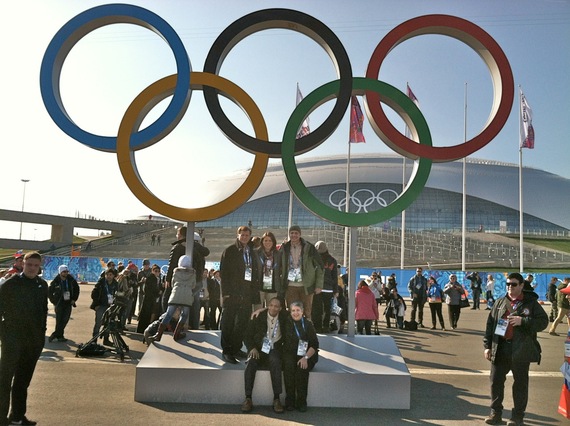 The last night, the Delegation was doing vodka shots with caviar and toasting to the future success of the message we had delivered because for us, it was all about the message. We were also toasting to the fact that we had made meaningful connections with each other that promise to be incredibly long-lasting. The President was holding us responsible for sending a message of inclusion so the athletes would not have to be distracted. He wanted them to be able to concentrate on fulfilling their dreams of being on the Olympic team and doing the best they could at sporting events. So we hope we helped the U.S. athletes, by represented the message or at least some of their message. We did not want them to be sidetracked or forced to deliver it themselves. Ultimately, the Olympics should be about the athletes, and the attention should be on sports. In a country like Russia whose leaders are intolerant, and values clash, this was difficult. But I feel our Delegation rose to the challenge and met it head-on.